Speaking of vaccines, everyone may first think of hepatitis vaccines, encephalitis vaccines, rabies vaccines, and so on. Unlike vaccines that prevent infection, cancer vaccines are an immunotherapy that can eliminate cancer cells. This vaccine can train immune cells, or T cells, to better recognize cancer and eliminate it, while preserving healthy cells in the body. A new small study suggests that individualized “cancer vaccines” may help prevent melanoma cells from growing within a few years.

Why is it so magical? The author of the study explained, “The only thing that can happen is that the tumor cells are actually killed.” It is speculated that this is the T cell induced by the vaccine to play this role.

The new study, published in the journal Nature Medicine on January 21, focuses on patients with advanced melanoma who have recently undergone surgery. The research team took samples from the tumors removed from the patients and used them to make individualized vaccines for 8 patients. 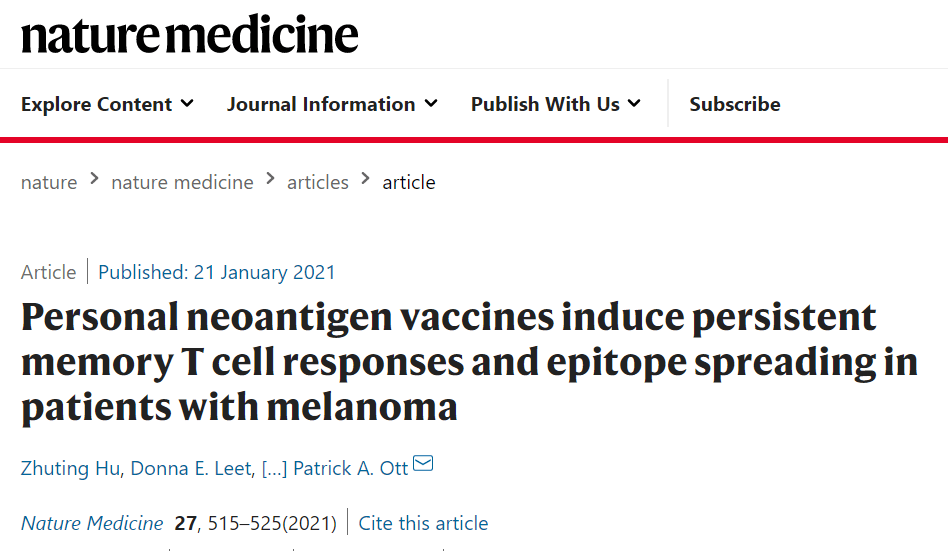 By detecting RNA, the research team predicted which unique proteins will be formed in different cancer cells. These proteins are called neoantigens and are like a red flag to the immune system. The final vaccine contains fragments of these new antigens so that the patient’s immune cells can know what they look like and track the cancer.

Eight patients received individualized vaccination about 4 months after the operation, and the team collected safety data for the next few years. The author noted that the patient experienced only mild side effects such as fatigue and flu-like symptoms. The team also collected blood samples at several points during the trial, with a median time of four years after vaccination, to detect the patient’s T cell response.

In this study, scientists discovered that once tumor cells are killed, they will decompose and overflow their substances. At this time, “smart” T cells will “pounce” to detect these residues and combine these The information is “recorded” for future attacks, and over time, they will even learn to identify more proteins associated with melanoma.

Cancer vaccines can continue to trigger an immune response

The author added that although the results of the study are promising, only 8 patients were included in this study, and more trials are needed to determine how effective the vaccine is. However, so far, limited data suggests that vaccines can trigger a sustained immune response and help control cancer, especially when combined with other immunotherapies. Study author Dr. Patrick Ott said, “What is really striking is the durability of the response. In all patients receiving treatment, a sustained response can be observed several years later.”

At the end of the 4-year follow-up period, all 8 patients had survived, and 6 of them showed no signs of disease activity. In other words, some people experienced cancer recurrence early in the study and received additional treatment.

“From the very beginning, we envisioned vaccines as a very important adjuvant therapy, which can be used in combination with other powerful drugs.” The study authors frankly said that no one expects vaccines alone to completely eliminate cancer in patients. As several patients received other treatments during the trial, they paid special attention to the effects of cancer vaccines.

Does it amplify or weaken these treatments? The study found that two patients who received additional treatment performed outstandingly. In both cases, the cancer cells have spread to the lungs, and they received an immune checkpoint inhibitor, which basically cuts off the “brake” of T cells to help enhance their activity. With vaccines and checkpoint blockade drugs in their system, the detectable cancers of these two patients were quickly eliminated.

In general, only a small percentage of melanoma patients benefit from immune checkpoint inhibitors, and cancer vaccines can improve the efficacy of these drugs, so new clinical trials add to this evidence. However, a well-known scholar who was not involved in the study said that this finding should be confirmed in larger clinical trials.

The study authors pointed out that vaccines and immune checkpoint inhibitors can also be “combined” with various adjuvants (substances that can stimulate a strong immune response) and substances that support the survival of T cells. Of course, before this future becomes a reality, more trials are needed. For example, future trials will require a control group and also need to figure out which T cell responses are related to long-term positive results, he added.