Humans may be able to form “hybrid” embryos with more animals to meet different scientific research or clinical needs.

In 2019, a multinational research team led by Spanish scientist and professor Juan Carlos Izpisua Belmonte of the Salk Institute for Biological Sciences in the United States claimed that they had implanted human cells into monkey embryos, successfully cultivating the world’s first human monkey hybrid Embryos once caused great controversy.

After all, if human-animal chimeric embryos develop a nervous system that resembles humans with conscious capabilities, or show human-like behaviors after full-term development, the ethical consequences of this may be unimaginable.

Recently, Professor Belmonte has cooperated with Academician Ji Weizhi, Professor Niu Yuyu, Professor Tan Tao and others of the Institute of Primate Translational Medicine, Kunming University of Science and Technology, China. Based on previous research, human stem cells were injected into the embryos of primate cynomolgus monkeys. And the chimeric embryo survived for nearly 20 days.

Despite ethical considerations, this research may still provide new insights into developmental biology and evolution, and have an abstract impact on the development of new models of human biology and disease.

The research is titled “Chimeric contribution of human extended pluripotent stem cells to monkey embryos ex vivo” and published in the latest issue of Cell magazine.

In this regard, Professor Belmonte said, “From previous research, the production of human-animal embryo chimera is often inefficient due to ethnic differences, and there is also the integration of human cells into animal embryos. Humans and primates Animals are more closely connected, and it is easier to form embryonic mosaics between the two. In-depth study of human and primate embryonic mosaics can help us better understand the growth barriers of human-animal embryo mosaics, and there are also It helps us find ways to overcome obstacles.”

We know that organs are an indispensable part of human survival, and complete organs are essential to a happy life for human beings. For many patients, organs have suffered irreversible damage due to disease or accidental injuries. At this time, organ transplantation is very important.

However, in China alone, there are 300,000 patients waiting for organ transplantation due to end-stage organ failure each year, but in fact only 10,000 to 20,000 patients have finally completed their organ transplants. The main reason is that organ donors are very limited. Therefore, scientists have been trying to cultivate human organs in vitro for a long time to solve the problem of insufficient organ transplant donors.

Professor Belmonte is one of them. In 2017, Cell magazine published the first mouse-rat, human-bovine mixed embryo related research, which attracted global attention. In the same year, Professor Belmonte started research on human-animal embryo chimera, trying to cultivate human organs through this technology. 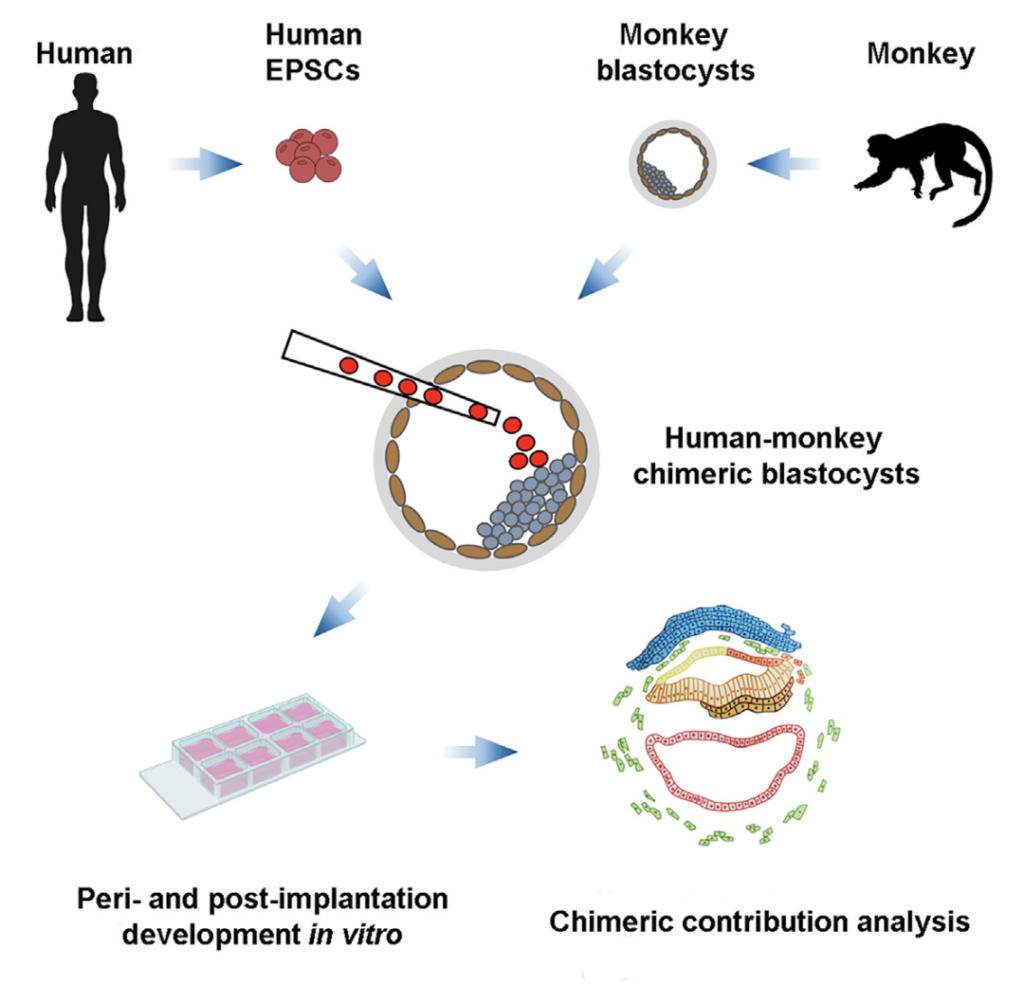 The creation of human-animal chimera embryos is divided into two main stages. First, use the CRISPR technology known as “gene scissors” to delete key genes that form organs in pig embryos and create genetic “vacancies”; the second step is to inject human induced pluripotent stem cells into pig embryos. Induced pluripotent stem cells are directly obtained from human somatic cells and have the same ability as embryonic stem cells to differentiate into various types of cells.

In 2017, Professor Belmonte took the lead in conducting research on mixed human-pig embryos
, And injected human pluripotent stem cells into 1,400 pig embryos. In the end, they successfully detected the presence of human cells in pig embryos, but the ratio was less than 1 in 100,000.

Obviously, a cell ratio of only 1/100000 cannot successfully form an organ. In this regard, Professor Belmonte explained, “It may be that humans and pigs are too different from each other, and human stem cells cannot be successfully settled in pig embryos. Therefore, most of the organs formed by human-pig chimeric embryos are still Pig cells”.

Subsequently, Professor Belmonte decided to experiment on closer species. So in 2019, Professor Belmonte took the lead in creating human-monkey chimeric embryos. However, due to moral concerns, the embryo was terminated on the 14th day of development, when the central system was about to be formed.

In this regard, Professor Belmonte once said, “If the experiment was not stopped, a human-monkey hybrid could have been born. The shaped stem cells can be used in human organ transplantation in the future, which is a major breakthrough for medical development.” However, many scientists also pointed out that human monkey embryos violate ethics and morals, and human monkeys are likely to develop self-awareness after birth, which will eventually lead to self-destruction.

In this research, Professor Belmonte said, “As scientists, we have the responsibility to conduct meticulous research in accordance with current ethical, legal and social norms. Before starting this work, we have made preparations for ethical consultation and review. This process helps us to better complete the experiment.”

After obtaining ethical permission, the researchers led by Professor Belmonte injected 25 human induced pluripotent stem cells into the monkey embryo on the 6th day of its formation, and then detected whether the embryo was expressed by human cells. Results On the first day, the researchers detected human cells in 132 embryos; 10 days later, 103 chimeric embryos were still developing. 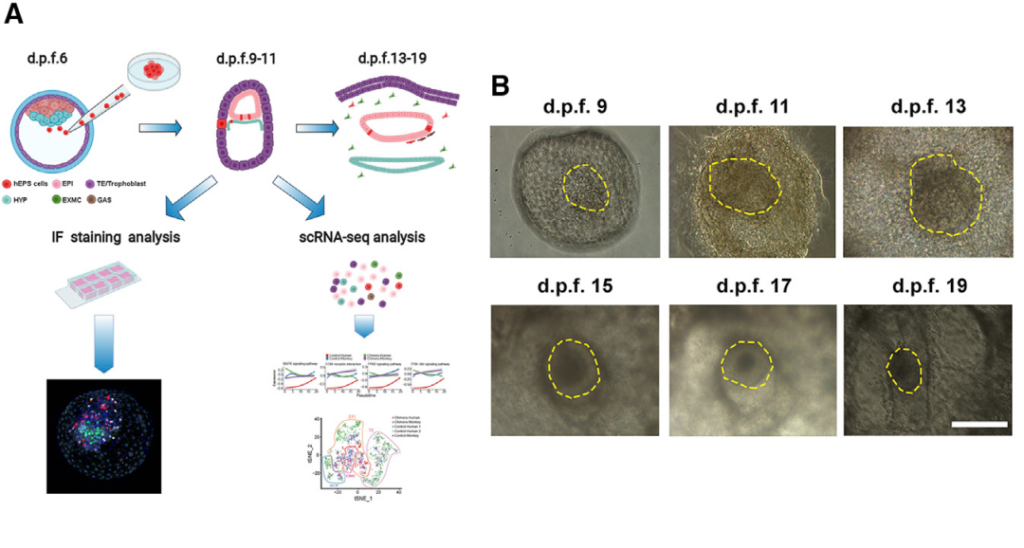 In this regard, Professor Belmonte said, “Because we cannot perform certain types of experiments in humans, we must have better models to understand and study human diseases and biological problems. The formation of human monkey chimeric embryos is the first step. In the future, it is necessary to further develop system models in combination with biological goals to study human diseases.”

In general, this study once again confirmed the feasibility of human monkey chimeric embryos, and the proportion of human cells after the normal development of “hybrid” embryos can also reach expectations. In the long term, human-animal embryo chimeras can not only be used to study early human development and model diseases, but also to develop new drug screening methods and potentially produce transplantable cells, tissues or organs.

However, researchers first need to evaluate the molecular mechanism of human monkey chimeric embryo formation in more detail and find a key way for the normal development of “hybrid” embryos. In the future, with the further development of molecular mechanisms, humans may be able to form “hybrid” embryos with more animals to meet different scientific research or clinical needs.