Cell blockbuster: The world’s first human self-organizing heart organ, which can beat and repair itself.

Cell blockbuster: The world’s first human self-organizing heart organ. The complexity of the heart structure is far beyond our imagination.

What are the most complex and delicate organs in the human body? The heart is definitely one of them. The complexity of the heart structure is far beyond our imagination. For a long time, scientists have successfully cultivated organoid models of various organs in vitro, but the progress in heart organoids has been slow.

Recently, a scientific research team from the Austrian Academy of Sciences in Vienna, Successfully cultivated the world’s first in vitro self-organized heart organoid model using human pluripotent stem cells, The model can spontaneously form a cavity and jump autonomously, without the support of a stent. At the same time, this kind of heart organ can automatically migrate and repair the damage by activating cardiac fibroblasts after being injured.

The study is based on:

The topic was published in the latest issue of Cell magazine. Professor Sasha Mendjan, a Biologist at the Austrian Academy of Sciences, is the corresponding author of this article.

The so-called organoid refers to a micro-organ with a three-position structure that can be cultured in an in vitro environment. It has a complex structure similar to a real organ and can partially simulate the physiological functions of a real organ. With the help of organoids, people can observe and understand the growth and development process of organs and understand the causes of diseases. At the same time, organoids are also promising in organ transplantation and drug screening.

Unlike the simple cavity structure that most people imagine, the structure of the heart is actually quite complex. The heart is composed of multiple layers of tissue, including many different types of cells: cardiomyocytes
(Atrial and ventricular muscle cells), Non-cardiomyocytes (Purkinje cells, smooth muscle cells, endothelial cells) Together with neuronal cells, these cells work together to ensure the normal functioning of the heart, thereby continuously supplying fresh oxygenated blood to other parts of the body.

Previously, in the process of culturing heart organoids in vitro, researchers found that cardiomyocytes often exist in the form of clumps instead of forming common tissue structures in the body. Therefore, in vitro models cannot be constructed well for heart disease research.

On September 18, 2020, researchers from Tokyo Medical and Dental University used 3D organoid technology to use mouse embryonic stem cells to construct the first three-dimensional functional organoid similar to the developing heart. The heart is very similar. The successfully constructed heart organoid includes four complete chambers and cells of the conduction system. At the same time, this kind of heart organ has functional properties close to its counterparts in the body.

Although 3D organoid technology based on tissue engineering technology can help humans build heart organoid models, since organoid models are not formed by spontaneous cell organization during the construction process, such organoids are useful in organ development and drug screening. Very limited.

As Professor Mendjan said, “The contribution of tissue engineering to biological research is naturally very prominent. However, in the natural process, the production of organs is not controlled by humans, but is formed by the spontaneous organization of cells. In this process, Each cell will interact with each other and grow, move and change shape as the organ structure appears. In other words, cells self-organize to form organs, just like nature allows the automatic formation of snowflake crystals, and the birds automatically flock in groups It’s difficult to realize the migration together through human engineering design.”

During the experiment, Professor Mendjan discovered that as a specific pattern of cell differentiation is activated, these cells will form a separate cell layer, similar to the structure of the human heart wall. 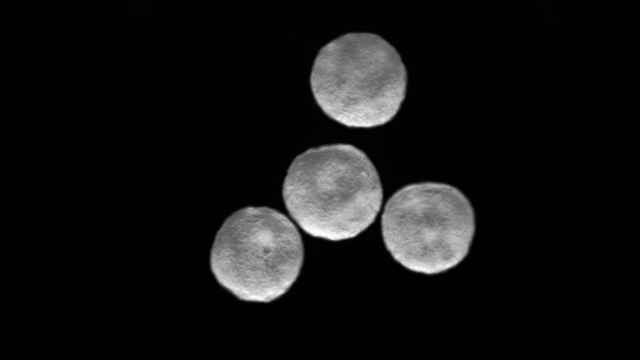 After a week of development, these cells will spontaneously organize to form an organoid with a 3D structure, which has a closed cavity, similar to the spontaneous growth trajectory of the human heart.
At the same time, the researchers found that this spontaneously formed cavity structure can contract and relax rhythmically autonomously, thereby squeezing the liquid in the cavity. 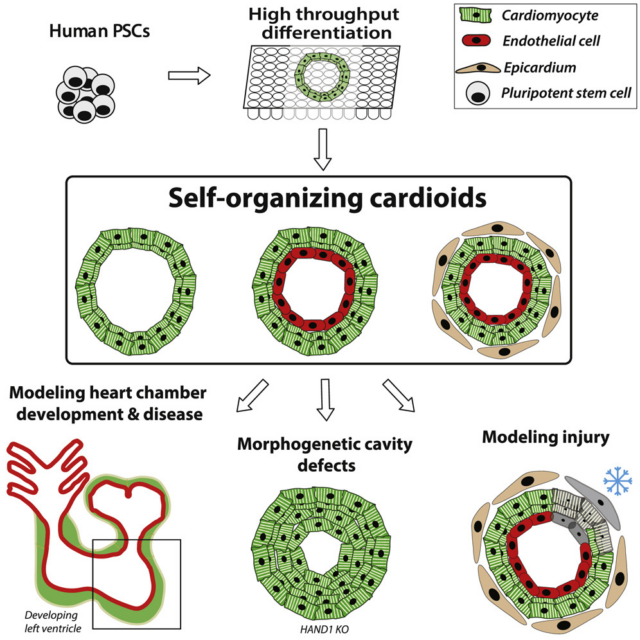 Subsequently, the research team also tested the reaction of this self-organized heart organ to tissue damage. They used a frozen steel rod to freeze some of the cells of the heart organoids to simulate the death of cells after the heart was injured. As a result, the researchers found that the cardiac fibroblasts in the cardiac organoids immediately migrate to the damaged site and synthesize some proteins to repair the damage.

At present, this study has only generated a single-chamber heart organoid structure. In the next step, the team plans to synthesize heart organoids with multiple chambers in vitro, just like the real human heart. Once this multi-chamber self-organizing heart organoid is formed, people can understand the cause of congenital heart disease, that is, the cause of fetal development defects. In this way, people can also develop new drugs more specifically, and have a greater grasp of the results of clinical trials.