Use the new synthetic gel to accurately replicates the human pancreas

Use the new synthetic gel to accurately replicates the human pancreas.

Nature Sub-Journal: Using the new synthetic gel, the pancreas “organs” can be easily cultivated, which accurately replicates the human pancreas.

Organoids refer to miniature organs cultured in the laboratory using human stem cells, which can be used as models of diseases, used to test drugs, and even replace damaged tissues in patients. To cultivate organoids, it is necessary to give stem cells an artificial environment suitable for growth that can mimic the natural environment.

Recently, research published in “Nature Materials” showed that a new synthetic gel, unlike previous gels from mice, has undesirable ingredients. It has strong stability and high accuracy, based on polyethylene glycol, and can be easily prepared. Researchers have used it to cultivate pancreatic “organoids”, and the new model can help develop and test potential drugs for the treatment of pancreatic cancer.

Engineers at the Massachusetts Institute of Technology collaborated with scientists from the Manchester Cancer Institute in the United Kingdom to develop a new method-using healthy or cancerous pancreatic cells to grow tiny pancreatic replicas. Their new model can help researchers develop and test potential drugs for the treatment of pancreatic cancer. Pancreatic cancer is currently one of the most difficult to treat cancers. It is known as the “King of Cancer” in the oncology field. According to The Lancet, The five-year survival rate after diagnosis of pancreatic cancer is about 10%, and it is one of the worst-prognostic malignant tumors.

Using a special gel that mimics the extracellular environment around the pancreas, researchers have developed pancreatic “organoids” to study the important interactions between pancreatic tumors and their environment. Unlike some gels previously used for tissue growth, MIT’s new gel is completely synthetic, easy to assemble, and maintains the same composition every time it is produced.

Linda Griffith, Professor of Teaching Innovation in the School of Engineering and Professor of Bioengineering and Mechanical Engineering, said: “Reproducibility is a major issue. The research community is always looking for ways to cultivate these types of “organoids” in a more organized manner, especially to control the microenvironment. .”

The researchers also showed that their new gel can be used to cultivate other types of tissues, including intestinal and endometrial tissue.

Griffith and Claus Jorgensen, head of the Cancer Research UK Manchester Institute in the United Kingdom, are the senior authors of this paper. This paper was published in “Nature Materials” and published an article entitled “A microenvironment-inspired synthetic three-dimensional model for pancreatic ductal” adenocarcinoma organoids” article. The main author is Christopher Below, who was a graduate student at the Manchester Cancer Institute in the United Kingdom. 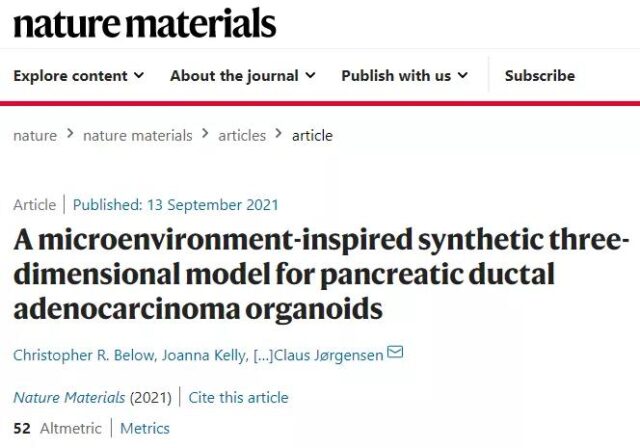 Traditionally, laboratories use commercial tissue gels to grow “organoids” in laboratory petri dishes. However, Griffith said that because the most widely used commercial gel is a complex mixture of proteins, proteoglycans and growth factors extracted from mouse tumors, different batches of gels are different and contain undesirable ingredients. It does not always allow the growth of multiple types of cells. About 10 years ago, Griffith’s laboratory began working on designing a synthetic gel that can be used to generate epithelial cells, which together with other supporting cells form sheets that line most organs.

The gel developed by the researchers is based on polyethylene glycol (PEG), a polymer that does not interact with living cells and is widely used in the medical field. By studying the biochemical and biophysical properties of the extracellular matrix surrounding human organs, researchers can determine the characteristics of the introduced PEG gel to help cells grow in it.

A key feature is the presence of peptide ligand molecules that interact with cell surface proteins called integrins. The viscous binding between the ligand and the integrin allows the cells to adhere to the gel and form “organoids.” Researchers have found that adding small synthetic peptides from fibronectin and collagen to the gel can make them grow out of various epithelial tissues, including intestinal tissue. Studies have shown that supporting cells and immune cells, called stromal cells, can also thrive in this environment.

In this new study, Griffith and Jorgensen want to see if this gel can also be used to support the growth of normal pancreatic “organoids” and pancreatic tumors. Traditionally, it is difficult for pancreatic tissue to grow in a way that replicates cancer cells and supports the environment at the same time, because once pancreatic tumor cells are removed from the body, they lose their unique cancer characteristics.

Jorgensen said: “We got the agreement from Linda, we got the reagent, and then it worked. I think this fully illustrates the robustness of the system and how easy it is to implement it in the laboratory.”

He also said that the other methods they tried were too complicated or could not reproduce the microenvironment in living tissue. Using this gel, Jorgensen’s lab was able to compare pancreatic “organoids” with tissues they had studied in living mice, and they found that tumor “organoids” express many of the same integrins as pancreatic tumors. In addition, other types of cells that usually surround tumors, including macrophages (a type of immune cell) and fibroblasts (a type of support cell), can also grow in the microenvironment.

Cultured from the patient’s cancer cells

The researchers also showed that they can use their gel to grow organoids from patients’ pancreatic cancer cells. They believe it can also be used to study lung cancer, colorectal cancer and other cancers. Such a system can be used to analyze how potential cancer drugs affect the tumor and its microenvironment.

Griffith also plans to use the gel to grow and study the tissues of patients with endometriosis, which causes tissue around the uterus to grow outside the uterus. This can cause pain and sometimes infertility.

One of the advantages of this new type of gel is that it is completely synthetic and can be easily prepared in the laboratory by mixing specific precursors (including polyethylene glycol and some peptides). Researchers have applied for a patent for this technology and are licensing it to a company that can commercially produce this gel.