In the human genome, approximately 8% of the DNA is the remnants of retroviruses that infected humans or human ancestors in ancient times. They have become part of the human genome and continue to this day, some of which can be traced back to tens of millions or even more. Billions of years ago.

Previous studies have shown that some of these ancient retroviruses (also known as endogenous retroviral elements, or ERV for short) play a role in cancer. Although ERV sequences will fall asleep over time and cannot produce virus particles, these ERV sequences are sometimes inserted into other genes, thereby disrupting their normal activities or acting as switches for oncogenes. However, recent studies have shown that if ERV is transcribed into RNA strands, they may also play an anti-cancer effect.

On May 10, 2021, the Adam Bass team of the Dana-Farber Institute of Harvard Medical School published a research paper titled: “Reprogramming of the esophageal squamous carcinoma epigenome by SOX2 promotes ADAR1 dependence” in Nature Genetics. 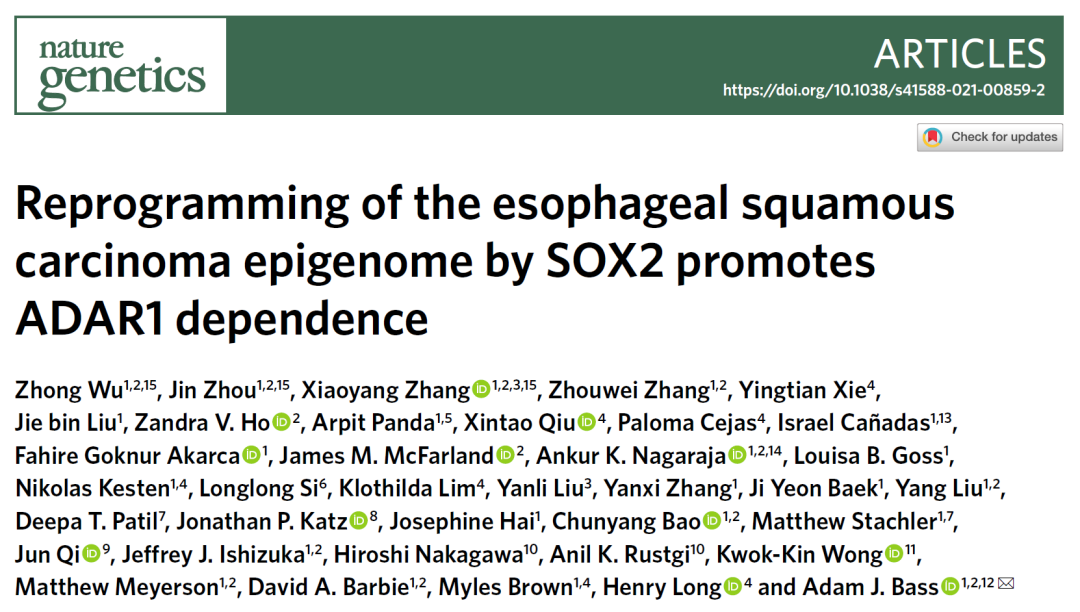 Remnants of retroviruses that infect humans or human ancestors in ancient times (also known as endogenous retroviral elements, abbreviated as
ERV
), plays a role in cancer. These sequences may sometimes be inserted into other genes, thereby disrupting their normal activities, or acting as switches for oncogenes. However, recent studies have shown that if ERV is transcribed into RNA strands, they may also play an anti-cancer effect.

When cells activate a large number of originally sleeping ERV, they will produce a large amount of double-stranded RNA and enter the cytoplasm, which will form a state similar to a virus infection and may cause the body’s inflammatory response. In this way, ERV may make cancer more sensitive to immunotherapy. Therefore, many researchers are studying ways to induce cancer cells to activate ERV.

In this new study, the research team created esophageal organoids from mouse tissues to track the progression of cancer from normal cells to malignant tumors.

Previous studies have shown that ADAR1 levels are associated with poor prognosis of esophageal cancer. This study shows that cancers rely on ADAR1 to prevent immune responses that may be very toxic to cells.

Now, cancer immunotherapy represented by PD-1/PD-L1 inhibitors has begun to be applied to the treatment of some patients with esophageal cancer, which can prolong the survival period of patients by several months.

Adam Bass, the corresponding author of the study, believes that in view of the above findings, blocking ADAR1 is likely to have a direct effect on esophageal cancer, and it may also play a greater value by improving the effect of cancer immunotherapy on patients with esophageal cancer.

The use of organoids to generate cancer from normal cells is a powerful method to reveal cancer-causing activities and test therapeutic targets. By making individual gene changes in these organoid models, you can see which combinations of gene changes cause cancer, and then determine the specific mechanism of tumor formation.

The organoids in this study started from the overexpression of the SOX2 gene, which is a commonly amplified factor that can promote the development of squamous carcinoma.

In this study, the research team established an esophageal organoid to simulate and track the development of cancer from a normal esophagus to a complete transformation. The organoids in this study start from the overexpression of SOX2 gene, and SOX2 gene amplification is one of the gene characteristics of esophageal cancer.

Through esophageal organoids, the research team analyzed the difference in the activity of SOX2 in normal tissues and cancerous tissues. The study on organoids with both SOX2 overexpression and tumor suppressor gene p53/p16 deletion found that SOX2 would turn on the expression of various oncogenes , It also activates endogenous retroviruses
(ERV), making cancer cells more dependent on ADAR1. 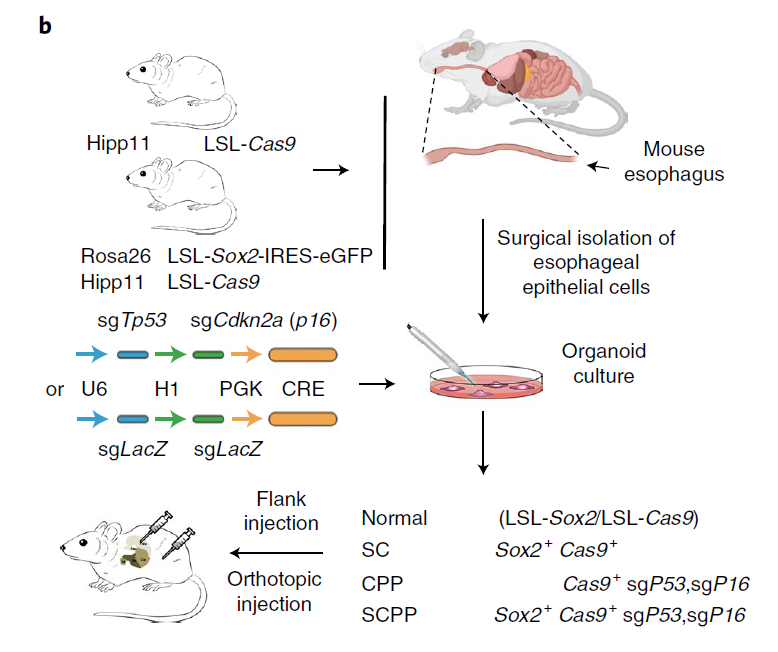 Because SOX2 also exists and plays an important role in normal esophageal cells, it cannot be directly used as a therapeutic target. However, these findings reveal new weaknesses in SOX2 overexpression in esophageal cancer. Blocking ADAR1 is likely to have a direct effect on esophageal cancer. Moreover, It is also possible to improve the effect of cancer immunotherapy on patients with esophageal cancer and exert greater value.