Many mRNA medicines other than mRNA coronavirus vaccine

Many mRNA medicines other than mRNA coronavirus vaccine.   Previously, it was believed that mRNA is easily degraded by the ubiquitous RNase, which is unstable and not suitable for drug development.

In the past 30 years, efforts have been made to improve the stability, translation efficiency and absorption of mRNA in cells. These optimizations include:

On the basis of these advances, Synthetic mRNA has become a universal delivery system for genetic information to induce cells to produce peptides and proteins.

mRNA from structure to drug

The protein is post-translationally modified and enters subcellular compartments, such as secretory pathways, cell membranes, nuclei, mitochondria, or peroxisomes through targeting sequences or transmembrane domains. Eventually, the protein is degraded and presents peptides on the major histocompatibility (MHC) complex.

When the cell enters, exogenous mRNA molecules are detected by pattern recognition receptors (PRR), including endosomal TLRs (TLR3 and TLR7/8TLR7/8) and cytoplasmic nucleic acid sensors (MDA-5 and RIG-1), resulting in I Type IFN and pro-inflammatory cytokines are released to provide endogenous adjuvant to mRNA.

mRNA has become an attractive form of cancer vaccine because it provides co-stimulation mediated by antigen delivery and innate immune activation. The mRNA vaccine encodes all or part of the sequence of TSA or TAA without relying on epitope prediction. 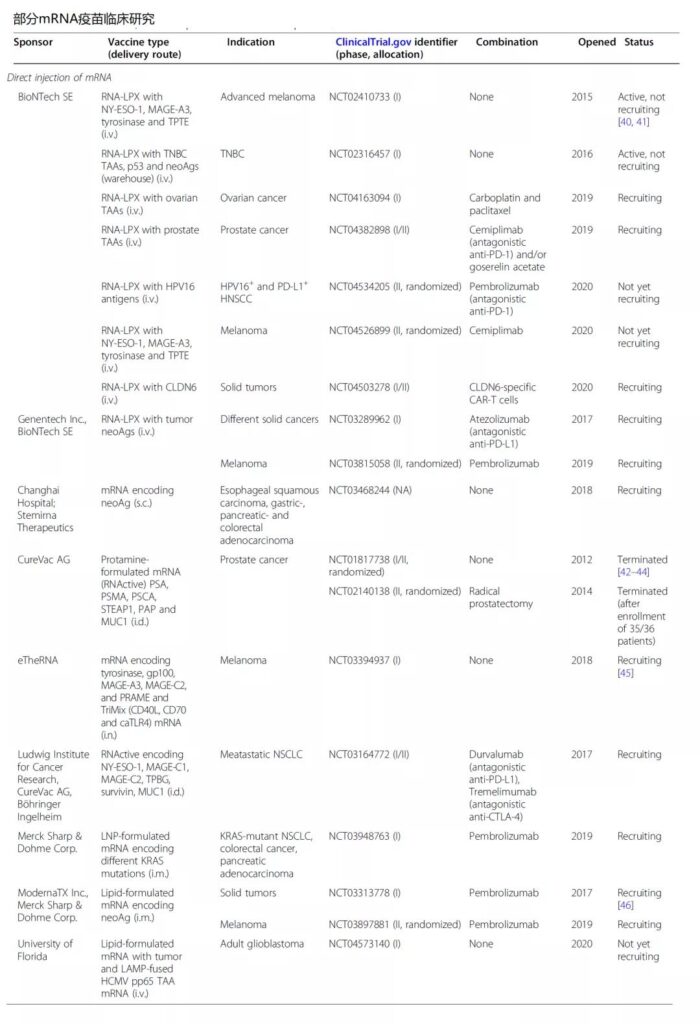 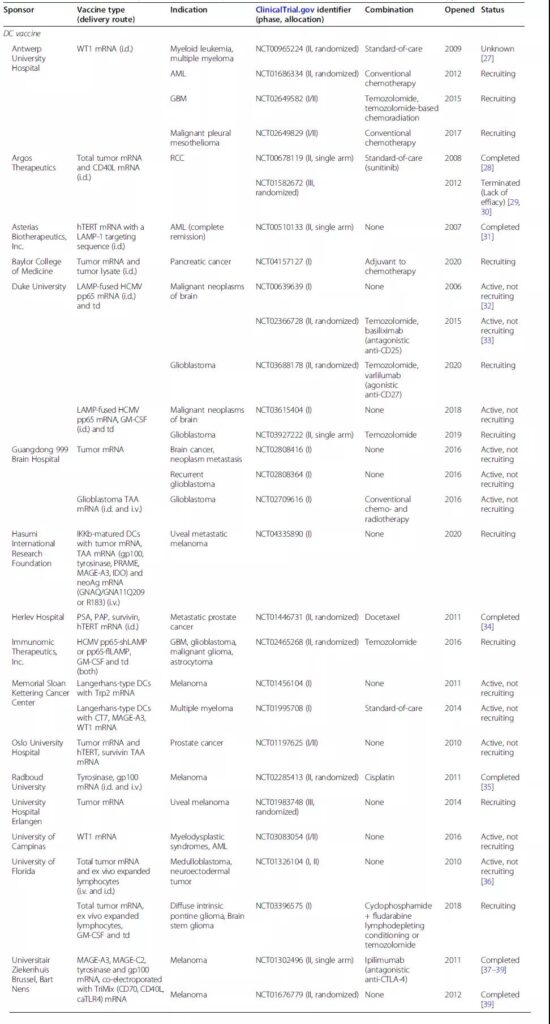 The immunomodulators encoded by mRNA include cytokines and costimulatory ligands and receptors. The most important companies in this field are also Moderna and BioNTech. 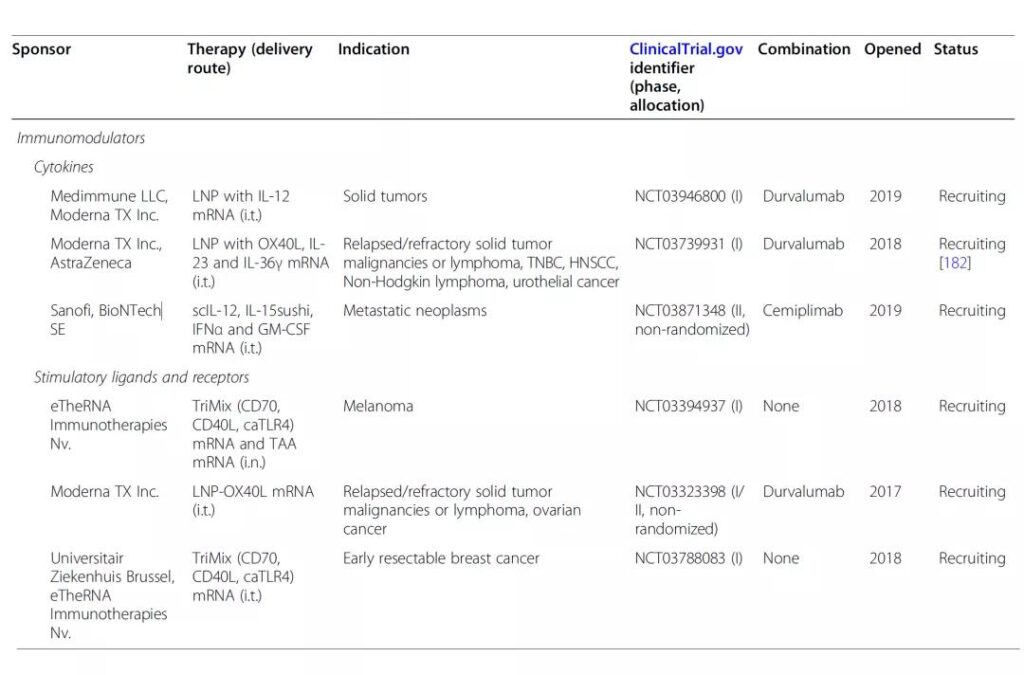 IL-2 is involved in T cell differentiation, proliferation, survival and effector functions, and has been approved for the treatment of melanoma and RCC. The main problem of recombinant IL-2 is that it activates Treg at the same time and has a short half-life. Next-generation products focus on selective activation and prolonging the half-life.

Using mRNA to express IL-2 in the body can prolong the production of cytokines and reduce the peak serum concentration, which is conducive to long-term activity.

IL-15 is related to the function of IL-2, and at the same time it sends signals through IL-2Rβ and the common γ chain (IL-2Rβγ) to activate T cells and NK cells. IL-2 is essential for the development and homeostasis of Tregs, and supports AICD to control autoreactive T cells, while IL-15 prolongs the survival rate of CD8 memory T cells.

The serum half-life of IL-15 is relatively short, and cancer patients receiving intravenous injection of recombinant IL-15 have dose-limiting toxicity. In order to avoid systemic exposure to IL-15, mRNA encoding the IL-15-IL-15Rα fusion structure was transfected in vitro for transplantation of CD8+ T cells.

IL-12 is an effective regulator of TH1 immunity and has significant anti-tumor activity in mouse tumor models. In humans, the potentially lethal toxicity of IL-12 when administered systemically is related.

The IL-12 mRNA (MEDI1191), a collaboration between MedImmune LLC and Moderna, is currently undergoing a clinical phase 1 study (NCT03946800, A Study of MEDI1191 in Sequential and Concurrent Combination With Durvalumab in Subjects With Advanced Solid Tumors).

Multiple mRNAs can be easily mixed to make a mixed drug product, and now there are multiple products entering clinical research.

The co-transfection of cytokine mRNA, caTLR4 mRNA and CaCD40 mRNA can increase the production of IFNγ, induce the up-regulation of T cell activation molecules (CD25, 4-1BB, OX40), and increase the cytotoxicity of TILs to autologous melanoma cells.

mRNA has also been explored to provide full IgG antibodies or scaffolds, including engineered bispecific antibody fragments, and to solve pharmacokinetics (such as short half-life, rapid clearance) and production challenges (such as polymers) for accelerating clinical development. .

In a mouse model of xenograft lymphoma, the LNPmRNA encoding rituximab induces a more pronounced anti-tumor effect than the recombinant antibody.

Duke University has conducted a clinical study, NCT01216436, Local Modulation of Immune Receptors to Enhance the Response to Dendritic Cell Vaccination in Metastatic Melanoma. The DC cells of this study were transfected with GITR-L and anti-CTLA-4 mAb RNA. However, the study has been terminated due to PI’s retirement.

In addition to the above, mRNA is also widely used in CARs/TCRs and other fields. I won’t repeat them here. 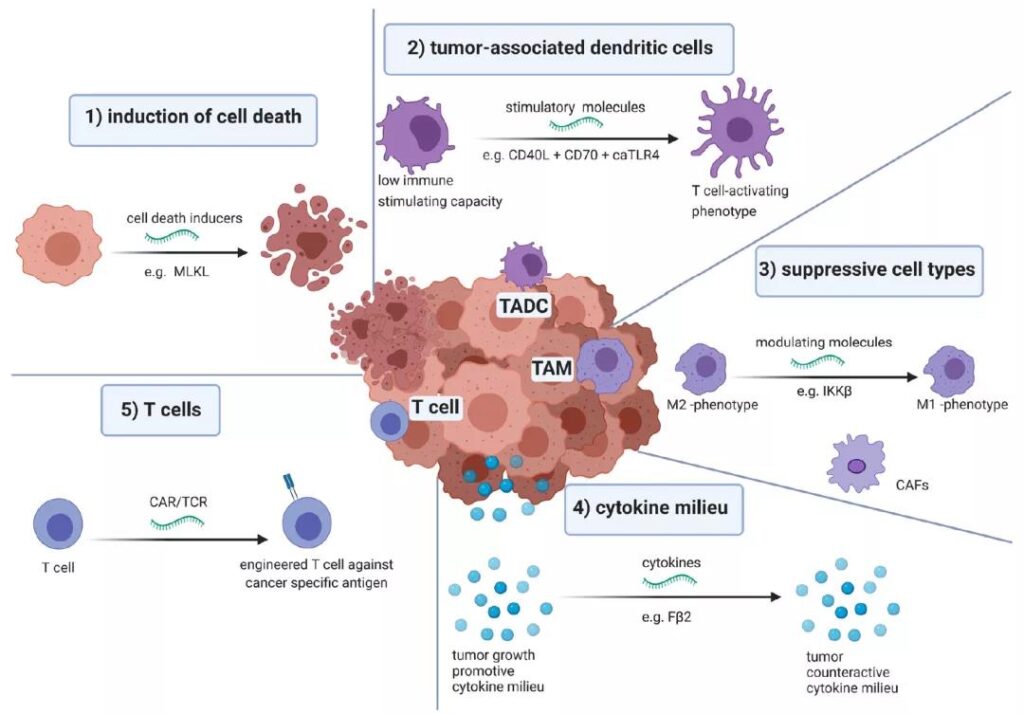 After solving the problem of easy degradation and short half-life, mRNA began to show potential in the field of tumor therapy.

Internationally, Moderna and BioNTech have taken the lead in the development of tumor vaccines and IL-2mRNA immunomodulators. There are also many domestic companies deploying mRNA therapies.