TIGIT: What is the prospect of clinical application in the future?

TIGIT: What is the prospect of clinical application in the future?  On May 18, 2021, Bristol-Myers Squibb announced that it would acquire Agenus’s pre-clinical TIGIT dual anti-AGEN1777 with a down payment of 200 million and a potential mileage of 1.36 billion, which will be used in the industry.

There are a lot of analysis and information articles about this deal, and this article does not list it for the time being.

TIGIT has entered clinical trials as a target of immunotherapy only 10 years after its discovery. Various evidences support that TIGIT plays a key role in limiting the adaptive immunity and innate immunity of tumors. This article starts from the mechanism, focusing on reviewing the role of TIGIT in tumor immunology and the clinical results of TIGIT-based tumor immunotherapy.

The crystal structure of TIGIT bound to CD155 shows that two TIGIT/CD155 dimers form a heterotetramer with TIGIT/TIGIT cis homodimer as the core, and each TIGIT molecule binds to one CD155 molecule. This aggregation of cis-trans receptors mediates cell adhesion and signal transmission. 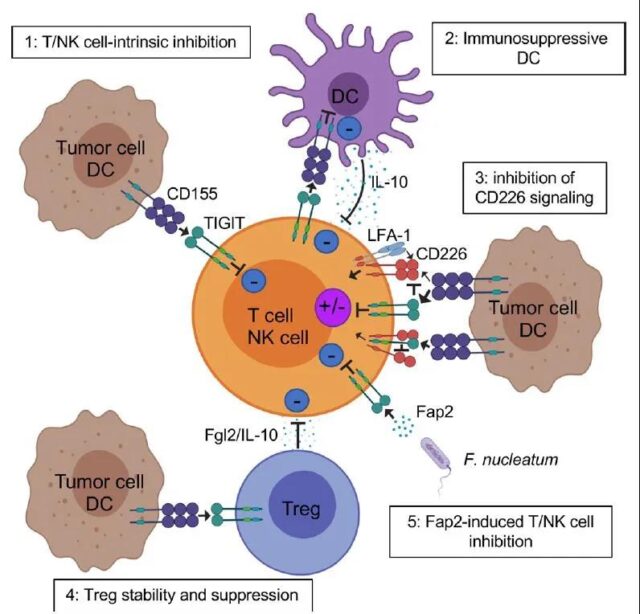 After TIGIT/CD155 binding is activated, ITT-like motifs are phosphorylated at Tyr225 and bind to intracytoplasmic signaling molecules Grb2 and β-arrestin 2 to recruit SH2 phosphatase-1 (SHIP-1) containing inositol. SHIP-1 blocks the signal transduction of phosphoinositide 3-kinase and mitogen-activated protein kinase. SHIP-1 also inhibits the activation of TRAF6 and NF-κB, resulting in a decrease in the production of IFN-γ by NK cells.

First, in the mouse model, TIGIT indirectly blocks T cell function by binding to CD155 on DCs. The combination of TIGIT and DCs induces CD155 phosphorylation and triggers a signal cascade to promote the formation of immune tolerant DCs, reduce the production of interleukin (IL)-12 and the increase of IL-10.

Third, multiple evidences indicate that TIGIT blocks CD155-mediated CD226 activation. CD226 is a costimulatory receptor, widely expressed in immune cells, including T cells, NK cells, monocytes, etc., as well as platelets. CD226 binds to LFA-1 to promote cell contact and trigger the TCR signal. The receptor also promotes the binding of CD4+ T cells to CD155 to produce pro-inflammatory cytokines. CD226 is directly involved in the recognition of tumors by T cells and NK cells in mice and humans. CD8+ T cells and NK cells in CD226-deficient mice show immune synaptic defects, leading to the loss of anti-tumor immunity. TIGIT binds CD155 with a higher affinity than CD226, thereby limiting CD226-mediated activation. In addition, TIGIT also directly binds CD226 in cis on the cell, destroying its ability to bind to the homodimer of CD155.

Fifth, TIGIT acts on Tregs to enhance immunosuppressive function and stability. TIGIT is highly expressed in a subgroup of natural Tregs in mice and in most human Tregs, and the up-regulation of TIGIT in Tregs is related to the hypomethylation of TIGIT sites and Foxp3 binding.

Compared with TIGIT-Tregs, TIGIT+Tregs up-regulated many Treg gene markers in the periphery and tumor sites, including Foxp3, Helios, neuronilin-1, CTLA-4, PD-1 and LAG-3. TIGIT+Tregs also inhibit the pro-inflammatory response of Th1 and Th17, but not Th2. After TIGIT is activated, TIGIT++Tregs produce IL-10 and fibrinogen-like protein 2, which mediate T cell suppression.

Interestingly, human Foxp3+Tregs showed lower CD226 expression than Foxp3−CD4+T cells. Compared with surroundings, CD226 in metastatic melanoma is also down-regulated by Tregs, which leads to an increase in the TIGIT/CD226 ratio. TIGIT and CD226 are opposed to each other, enhancing or destroying the inhibition and stability of Treg, respectively. The ratio of TIGIT/CD226 in Tregs seems to be related to the increase in the frequency of Tregs in tumors and the poor clinical outcome of ICB.

Further research is needed to determine whether the ratio of TIGIT/CD226 in Tregs can be used as a biomarker for the clinical response of solid tumor patients to ICB.

PD-1 and TIGIT dual blocker is a promising method of tumor combined immunotherapy.

Compared with a single blocker, the dual PD-1/TIGIT blocker also enhances the proliferation and function of tumor antigen-specific CD8+ T cells and TIL isolated from melanoma patients. Interestingly, the PD-L1/TIGIT dual blocker (atezolizumab/tiragolumab), as the first-line treatment for patients with PD-L1 positive non-small cell lung cancer, seems to have a higher clinical level than the PD-L1 blocker alone. Benefits, although similar in toxicity. However, these observations need to be confirmed in large randomized clinical trials.

The effects of PD-1/TIGIT dual blockers in vitro and in mouse tumor models can be antagonized by blocking CD226, indicating that TIGIT blockade mainly works by transducing CD155-mediated signals to CD226 activation.

In addition, PD-1 induced SHP2-mediated dephosphorylation of CD226, supporting the dual PD-1/TIGIT blocker to promote CD226 signal transduction. According to this logic, CD8+TILs are down-regulated in multiple solid tumors (including melanoma), which may be an important obstacle to limit the impact of dual PD-1/TIGIT blockers on cancer patients. Membrane-bound CD155 mediates the down-regulation of CD226 by immune cells in TME through the internalization and degradation of CD226, which supports the role of CD155 in mediated immune dysfunction.

In animal models, TIGIT blockade or TIGIT deletion can significantly increase the anti-tumor response mediated by NK cells in vitro and in vivo. A recent study on B16 melanoma and CT26 lung metastasis mouse models showed that TIGIT blockers alone or in combination with PD-1 blockers mainly act on NK cells to enhance the anti-tumor response mediated by CD8+ T cells To stop tumor growth. In these experimental models, NK cell-specific TIGIT deficiency and NK cell depletion reduced the effect of TIGIT blockade.

However, many other studies support that TIGIT block alone cannot significantly enhance CD8+ T cell immunity and promote tumor rejection in wild-type mice transplanted with solid tumors. The two observations are contradictory, indicating that the mechanism of the potential auxiliary effect of NK cells on CD8+TIL and the relevance of these findings to cancer patients remain unclear. Whether and how NK cells participate in environmental cues to guide the initiation, maturation and memory differentiation of CD8+ T cells need further research.

As TIGIT competes with IRs CD96 and CD112R to bind its ligands, multiple studies have investigated the combination therapy of TIGIT and other IRs in the TIGIT family with PD-1, including CD96 and CD112R. TIGIT and CD96 have a synergistic effect to inhibit the anti-tumor response of tumor-bearing mouse models with lung metastasis. The anti-tumor effect of CD96 blockers is higher in TIGIT-/- mice. The combination of CD96 blocker and anti-CTLA-4 or anti-PD-1 is more effective, and its effect depends on the production of NKs, CD226 signal and IFN-γ.

In addition, TIGIT blockers alone or in combination with PD-1 blockers combined with CD96 blockers significantly reduced the growth of B16 melanoma in wild-type and Cd155-/- mouse models. It is worth noting that the role of CD96 as IR is still controversial, because there is also evidence that it can act as a costimulatory receptor for CD8+ T cells. Multiple experimental studies in vitro and in mouse models have shown that CD112R blockade combined with TIGIT blockade can improve the anti-tumor immune response. The synergistic effect of CD112R blocker and TIGIT blocker enhances the antibody-dependent cytotoxicity (ADCC) triggered by NK cells against breast cancer cells in vitro. In the MC38 tumor mouse model, compared to the single blockade, the dual CD112R/PD-L1 blockade has a significant improvement.

In addition, CD112R blockers alone or in combination with TIGIT blockers and/or PD-1 blockers can increase the ability of TIL to produce cytokines in ovarian, endometrial and lung tumors.

A number of studies have shown that anti-CTLA-4 monoclonal antibodies work through ADCC-mediated Treg depletion.

Whether the anti-tumor effect of anti-TIGIT antibodies on cancer patients is Fc-dependent remains to be further studied. 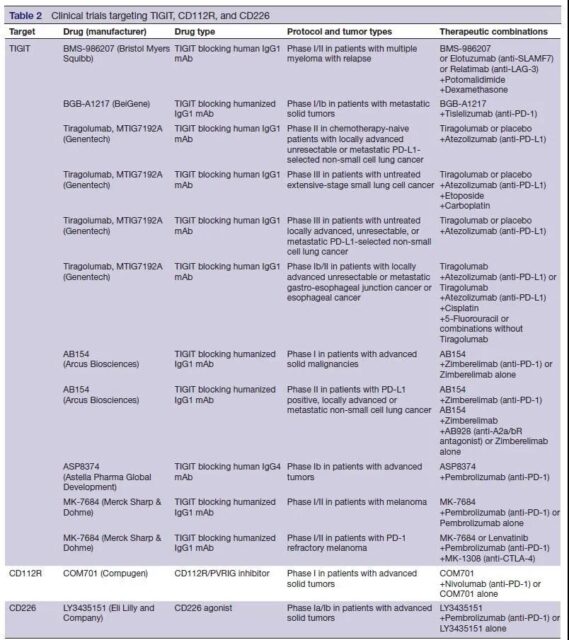 TIGIT is a promising target for tumor immunotherapy, especially in combination with PD-1 blockers. However, with the progress of clinical trials for cancer patients based on TIGIT, we need to solve many key issues and challenges.

First of all, what is the mechanism of action of TIGIT blockers on cancer patients?

Are these effects mainly mediated by their direct activity in CD8+ T cells, Tregs, or both? Can TIGIT block the reprogramming of APCs in TME to increase T cell activation or activation? Will these effects vary depending on the stage of the disease? Can TIGIT blockers mediate NK cell-mediated effects on MHC class I tumors in vivo?

Reactivity, does this provide opportunities for clinical benefit for patients with PD-1 refractory cancer? Moreover, in addition to PD-1/TIGIT dual blockers, does CD112R or CD96 blockers have any potential synergistic effects, as shown in mouse tumor models and in vitro studies?

In this regard, we must remember that the role of CD96 as IR is still controversial. In addition, evidence that CD112R blockade can potentially enhance autologous human tumor antigen-specific CD8+ T cells is still missing. The answer to this important question may come from the first phase of clinical trials to evaluate the efficacy of a CD112R inhibitor alone or in combination with anti-PD-1 monoclonal antibodies on patients with advanced solid tumors (NCT03667716).

In addition, CD226 plays an important regulatory role in PD-1/TIGIT dual blockade. The down-regulation of CD8+T cells and NK cells in TME may be the main obstacle to the success of PD-1/TIGIT dual blockade. Therefore, it is necessary to design new strategies to increase the expression and signal transmission of CD226 to prevent its down-regulation in TME. It is worth noting that an ongoing clinical trial is testing anti-CD226 agonists (NCT04099277) in a variety of cancers.

In short, TIGIT has entered clinical trials as a target for immunotherapy only 10 years after its discovery.

With the deepening of research on TIGIT-mediated immune response regulation, it will help to design optimized combination strategies of TIGIT blockers for cancer patients, and will also help develop targeted TIGIT therapies to treat other chronic expressions of this protein disease.