A large number of studies have shown that blood lactate is positively related to the short-term and long-term morbidity and mortality of patients. In recent years, the determination of lactic acid has received more and more attention, and it was confirmed as the first core element by the one-hour cluster treatment of the 2016 Save Sepsis Campaign. This exercise recommends instructing patients to resuscitate fluids to normalize lactic acid concentration. However, because the increase in lactic acid may originate from various pathophysiological processes other than sepsis, the application and interpretation of this test are often misused, so understand the mechanism of lactic acid production and the various factors that lead to increased blood lactic acid concentration. Physiological reasons are crucial.

ATP activates the vasomotor response through purinergic receptors, thereby increasing blood flow to tissues. Lactic acid is a signal molecule in the brain that connects neuronal activity, metabolism, substrate availability and blood flow, and may be related to short-term memory and panic disorder.

Most lactic acid in the body is produced by skeletal muscle. Lactic acid is released from the tissues into the circulation, and is metabolized to glucose through gluconeogenesis in the liver (60%) and kidneys (30%), and then used for glycolysis in different organs. It is directly filtered and reabsorbed by the kidneys, and only a small part is lost in the urine. This cycle is called the Cori cycle. ATP is produced through glycolysis at the tissue level during stress, but the total net consumption of ATP is the cost of gluconeogenesis in the liver and kidneys. 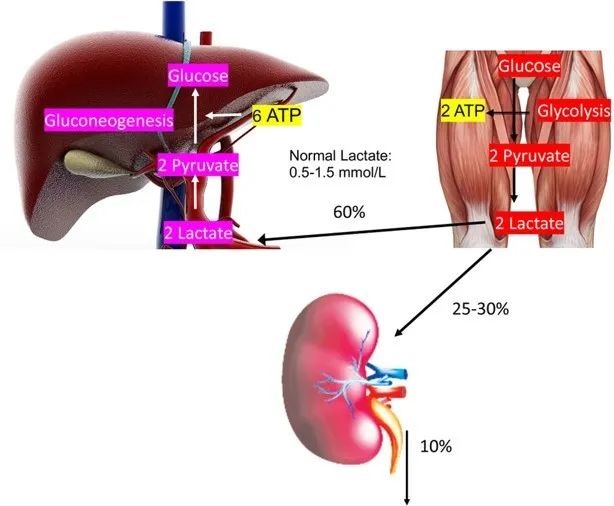 The composition of the Cori cycle. In skeletal muscle, lactic acid is a product of the conversion of pyruvate produced by glycolysis, and is converted to glucose in the liver through an ATP-dependent pathway. The kidneys are responsible for 25% to 30% of lactic acid metabolism. The remaining small amount is metabolized by other organs or lost in urine.

Lactate and lactic acid are often used interchangeably without understanding some clinical biochemical basis. Lactate is an anion Lactate-, which is a weak base directly converted into pyruvate. Lactate- is a buffer substance that accepts protons produced when ATP is hydrolyzed to ADP. During the demand period, glycolysis can be orders of magnitude faster than the Krebs cycle and oxidative phosphorylation. When excess hydrogen ions cannot be utilized by aerobic metabolism, or cannot be neutralized by bicarbonate, lactic acid and other buffer systems of the body, acidosis can result. Therefore, hyperlactic acidosis is mainly the result of cell acidosis, rather than the direct cause of acidosis. When the arterial pH drops below the normal range and is accompanied by hyperlactic acidosis, it is usually called lactic acidosis. It is more appropriate to use terms such as sepsis or drug-related lactic acidosis.

When lactic acidosis is caused by tissue hypoxia or systemic hypoperfusion, it is classified as type A, while those caused by other causes are classified as type B. Type B1 is secondary to underlying diseases, type B2 is related to poisons or drugs, and type B3 is related to congenital metabolic defects. There may be a clear overlap between type A and type B lactic acidosis.

In severe illness, anaerobic glycolysis tends to increase. Any systemic circulatory shock state (hypovolemia, cardiogenic, distributed, obstructive) can lead to a decrease in tissue perfusion, which will lead to tissue hypoxia and type A lactic acidosis.

Local hypoperfusion is also a common driver of lactic acidosis, such as ischemia of limbs or individual organs secondary to arterial or venous thrombosis, compartment syndrome, trauma, burns, necrotic soft tissue infections, rhabdomyolysis, and iatrogenic Surgical clipping. Even with normal blood perfusion, blood oxygen levels may decrease, leading to type A acidosis. The cause of low blood oxygen levels may be secondary to hypoxemia caused by respiratory failure, severe anemia, or carbon monoxide poisoning.

However, the critical level of hypoxemia that raises lactic acid is quite low (PaO2 is less than 35mmHg). For all these pathological conditions, when the rate of lactic acid production is higher than the rate of hepatic clearance and exceeds the threshold of renal excretion by 5-6mmol, hyperlactic acidemia occurs.

Type B lactic acidemia occurs in the absence of evidence of insufficient tissue oxygen supply. Although type B lactic acidemia is much less common than type A lactic acidemia, type B has a very broad differential diagnosis. The increase in lactate caused by the failure of clearance can be seen in liver and kidney dysfunction, but it is more pronounced in cirrhosis and end-stage liver disease, because the liver is the main site of gluconeogenesis. Many congenital disorders of carbohydrate metabolism, glycogen storage or mitochondrial disorders may lead to the accumulation of pyruvate through downstream defects, leading to increased lactic acid.

Many drugs are related to lactic acidosis. The classic example is the commonly used hypoglycemic drug metformin. Metformin rarely causes lactic acidosis, but it is often associated with lactic acidosis in the presence of other complications. Metformin reduces liver intake of lactic acid through several possible mechanisms, thereby reducing liver gluconeogenesis.

It increases glycolysis by damaging mitochondrial complex 1 and increases the production of lactic acid. Mitochondrial complex 1 maintains the proton gradient required for ATP production. High doses of metformin will reduce the liver’s intake of lactic acid and increase the production of lactic acid in the small intestine and other organs. Interestingly, a study involving 37,000 intensive care unit patients showed that among patients with a lactate concentration of 5-10 mmol, metformin users had a lower mortality rate (35%) than non-users (43%). Diabetes is independently related to lactic acidosis and not to the use of metformin.

The antibiotic linezolid and several nucleoside reverse transcriptase inhibitor therapies for the treatment of human immunodeficiency virus are associated with mitochondrial toxicity. Any drug overdose that causes liver or kidney damage or excessive sympathetic nerve activity can cause lactic acidosis. Malignant tumor-related lactic acidosis may be caused by increased anaerobic metabolism in tumor cells.

For anesthesiologists, it is necessary to understand the potential effects of propofol on lactic acid metabolism. After high-dose and/or prolonged administration, propofol infusion syndrome is found with hyperlactic acidemia, and many cases have been reported. However, in a well-controlled study, after 8  hours of spinal surgery under total intravenous anesthesia with propofol, serum lactic acid did not increase, while sevoflurane anesthetics increased by 7%.

Sepsis is a unique clinical disease that is related to both type A and type B lactic acidosis. Sepsis and septic shock are an abnormal response of the body to infection, which can lead to disturbances in the macrocirculation, microcirculation and cellular levels.

Even after full fluid resuscitation, multiple mechanisms can promote the continuous production of lactic acid. Damage to the capillary endothelium may impair the ability of red blood cells to unload oxygen, even if the hemodynamics are normal or corrected.

Animal studies have shown that lactic acid interferes with the production and release of ATP in red blood cells at low PaO2. This red blood cell anergy during hyperlactic acidemia, such as Plasmodium falciparum infection, may be part of the cause of septic shock and hypotension.

Patients who initially experience increased lactate should receive careful diagnosis and treatment for the underlying cause. The determination of lactic acid has three purposes: diagnosis of severe sepsis, triggering goal-directed therapy, and determining the initial value, and judging the effect of treatment when it rises. Type A lactic acidosis should be based on fluid resuscitation, hemodynamic support using vasoactive drugs, and source control as the core principles, with emphasis on restoring local or systemic tissue perfusion. When the initial diagnosis is still unclear, hypoperfusion of the tissue can be assumed, unless otherwise proven. When possible, type B lactic acidosis generally needs to remove the causative factors or correct the primary metabolic defect for treatment. It is often difficult to determine the cause of the elevated serum lactate.

Classical studies have shown that elevated lactic acid indicates adverse outcomes and is related to increased mortality. So far, in the early recognition and treatment of sepsis, the effectiveness of lactic acid is the most important. The main principles of the 1h Rescue Sepsis Campaign 2016 for patients with suspected sepsis include: measuring lactic acid levels. If the initial lactic acid>2mmol/l, you need to re-measure. For patients with hypotension or lactic acid ≥ 4mmol/l, 30ml/kg can be quickly supplemented with crystalloids. Individual randomized controlled trials proved that early lactic acid-guided resuscitation can significantly reduce mortality.

After the early guidelines oriented fluid resuscitation, it is necessary to carefully and continuously reassess the patient’s volume status to prevent fluid overload. After more than 5L of resuscitation, for every liter of fluid given, the mortality rate will increase by 2.3%. Failure to clear lactic acid prompts clinicians to re-expand the differential diagnosis of the source of occult elevation.

08 Use lactic acid to guide treatment

Tissue perfusion is the balance between oxygen delivery and oxygen consumption. The traditional view is that there is a correlation between mixed venous oxygen saturation (sampled from the pulmonary artery catheter) and lactic acid, but this is a fallacy. The original proponents of goal-directed therapy focused on using mixed venous oxygen saturation from the central vein as the end point for sepsis resuscitation.

Elevated lactate in critically ill patients not only reflects tissue hypoxia. Even in the presence of oxygen, cellular mitochondria cannot process all the pyruvate in front of them, leading to hyperlactic acidemia. Therefore, super oxygen delivery by increasing the ratio of oxygen delivery is an ineffective treatment. In the hope of returning to normal steady-state levels, many people recommend using bicarbonate to neutralize lactic acidosis. It is a pity that, except for the possible benefit in certain groups of people (like kidney failure or right ventricular dysfunction), the studies so far have not consistently proven effectiveness, and some studies even consider it harmful.

Vitamin C, corticosteroids and thiamine have been considered drugs for the treatment of sepsis. Patients in septic shock who received thiamine within 24 hours of admission improved lactate clearance and reduced 28-day mortality. Recent studies have shown no benefit. A double-blind, randomized controlled study was based on a 28-day mortality rate, but the initial lactic acid (1.6-3.2mmol) was not as elevated as clinicians usually see in severe sepsis. An open, multi-center study showed that the combination of hydrocortisone, vitamin C and thiamine did not reduce mortality or reduce the dose of vasopressors within 7 days (calculated as the norepinephrine dose) compared to placebo And converted to the sum of adrenaline and vasopressin doses). There was no baseline thiamine level in either report.

Elevated blood lactate is a sign of metabolic disorders caused by a variety of clinical causes. The treatment of patients with early lactic acid elevation should focus on identifying the source early, so as to target treatment. Restoring tissue perfusion is the most important. Lactic acid level has a strong predictive effect on the prognosis of patients, but the relationship with fluid resuscitation is not obvious. Intravenous fluids may not be beneficial, and persistent hyperlactemia needs to be reassessed for proper source control and consideration of other therapeutic interventions.