Application and Prospect of Allosteric Design in Protein Engineering

Application and Prospect of Allosteric Design in Protein Engineering. Allostery is a kind of biochemical behavior in life, which mainly refers to the perturbation of specific sites (namely allosteric sites) on proteins and other macromolecules, thereby causing the conformational changes of the same protein or the dynamics of remote sites Variety.

The molecular mechanism of allosteric can initially be explained by two famous models from the 1960s, including the “coordination model” Monod-Wyman-Changeux (MWC) and the “sequence model” Koshland-Némethy-Filmer (KNF). Both models assume that a conformational change can occur between the two main conformations of the protein (such as the active and inactive states).

Since the 1990s, the allosteric model has entered the age of dynamics. The model believes that the conformation of the structure will change dynamically when allosteric occurs. Furthermore, the “conformation selection and population shift” model provides a new hypothesis for the development of allosteric theory.

This model explains the operation of allosteric from the perspective of free energy change. In this model, the allosteric effect will cause the redistribution of the conformational population within the collection, that is, population shift. The population transfer theory recognizes that all conformational states are pre-existing, including inactive, active and transitional states.

Stronger and more conservative, the corresponding drugs have less side effects and allow the regulation of protein functions. Inspired by the propagation of allosteric effects between proteins in the signal network, Nussinov et al. extended the concept of allosteric to between proteins. They believe that the allosteric effects of drugs can be spread not only in proteins, but also through protein-protein interactions, thereby improving or blocking specific interactions.

Since 2009, the establishment and development of the global variable structure data center ASD (http://mdl.shsmu.edu.cn/ASD) has laid the data cornerstone for the research and design of variable structure. With the help of this big data, variants are gradually applied to long-distance communication detection and expand the scope of drug development. For example, in long-distance communication detection, mutations in clinical samples can be used as probes to screen disease phenotypes through allosteric effects, thereby discovering potential kinesins of diseases.

These driving factors are potential sources for identifying new targets for cancer, which in turn contributes to precision medicine. The role of source innovation. At the same time, more and more allosteric effects are being applied to protein engineering, which helps us manipulate protein activities in living cells with high spatiotemporal resolution. 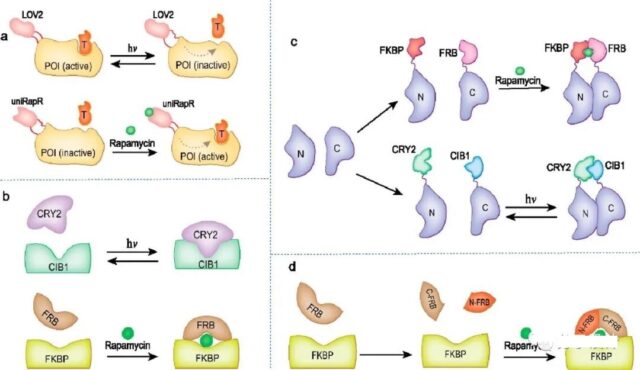 Chemical genetics and optogenetics have been proven to be effective techniques for constructing allosteric regulatory protein systems. The allosteric protein designed based on chemical genetics and optogenetics is realized by fusing the regulatory sensor domain with the host protein and generating chimeric proteins through molecular cloning technology. Several sensor domains have been used for allosteric regulation of protein functions. When receiving a specific chemical or optical signal (such as ligand, light or pH), the sensor domain usually undergoes a large conformational change, which leads to a substantial change in the activity of the host protein, thereby achieving non-invasive control of the protein function .

One way to regulate protein function is to perturb (such as using order-disorder control methods) allosteric sites. For example, the optogenetic switch LOV2 has been engineered through direct perturbation. LOV2 is a member of the PAS superfamily. LOV2 is composed of cofactor flavin mononucleotide (FMN), PAS folded and a large alpha helix region (Jα helix) at the C-terminus of the folding. Under blue light irradiation, a covalent compound is formed between the cysteine ​​in the FMN and the PAS fold, resulting in a large conformational change and the Jα helix unfolds.

When the radiation ceases, LOV2 returns to its original conformation within a half-life of about 30 seconds. The rapid light cycle and strong conformational changes after light excitation make LOV2 particularly effective. The regulation of LOV2 is usually achieved by fusing the C-terminus of Jα to the desired target protein. LOV2-based allosteric regulation has been achieved in a wide range of proteins, such as Rac1-GTPase, RhoGTPase, GEF, Src kinase, histidine kinase, caspase, protein tyrosine phosphatase, dihydrofolate reductase Trp Repressor protein, intein, and transcription factor, etc.

Chemical genetics methods are used to regulate the kinase function of focal adhesion kinase (FAK). In this method, Karginov et al. used the rapamycin binding domain iFKBP and FKBP12-rapamycin binding (FRB) domain. When iFKBP is allosterically inserted, the chimeric FAK is inactive without rapamycin, and its function is restored after the addition of rapamycin. Farrants et al. engineered Nanobodies to control the affinity of green fluorescent protein (GFP) by using small molecules to “open” and “close”.

A two-component system usually includes a transmembrane histidine kinase and a response modifier. Histidine kinase senses specific environmental signals, its allosteric changes the intracellular conformation and activates autophosphorylation, the phosphoryl group is further transferred to the response regulator, and then the downstream gene expression is induced.

Compared with the two-component system, the one-component system is simpler and contains input and output domains in a single protein, such as the LacI lactose operon repressor. Taylor et al. designed new variants of LacI based on computational protein design, saturation or random mutagenesis and multiple assembly, which responded to four new inducer molecules. Similar strategies can be applied to two-component systems to extend the specificity of sensors and create new switches.

In general, the allosteric regulation of proteins is still in the early stage of extending to the application field, and it is very necessary to develop a wide range and applicable tools and strategies to realize the regulation of various proteins. The increased understanding of protein structure-function relationships and advances in computational modeling and machine learning methods should lay the foundation for general methods. In the future, we anticipate that there will be advanced strategies for rationally designing allosteric protein switches to achieve protein regulation, thereby expanding the wide range of applications of allosteric in the field of protein machinery.