As a superfamily of membrane receptors, G protein-coupled receptors play an important role in physiological processes, including cell proliferation, metabolism and neuromodulation.

GPCRs are important targets of therapeutic drugs, and allosteric regulation of GPCRs is a new direction for drug discovery.

Although some drugs have achieved some successful applications, the high degree of conservation of orthomorphic drug targets leads to adverse reactions in the process of drug application.

Due to major breakthroughs in structural biology in recent years, allosteric sites in the extracellular, intracellular, or 7 transmembrane spiral core regions of GPCRs have been reported successively.

However, the traditional GPCR allosteric sites also have a certain degree of conservation among homologous subtypes, making the application of GPCR allosteric modulators a problem.

A promising way to solve this problem is to design allosteric modulators that target the receptor surface position.

However, the allosteric sites on the outside of the cell are usually flat, making design very difficult.

The point is very different, and it is more dependent on lipid bilayers than traditional allosteric sites.

So far, this type of site is unique to GPCRs, showing diversity in specific receptors, and is a promising strategy to overcome the difficulties of GPCR drug discovery. 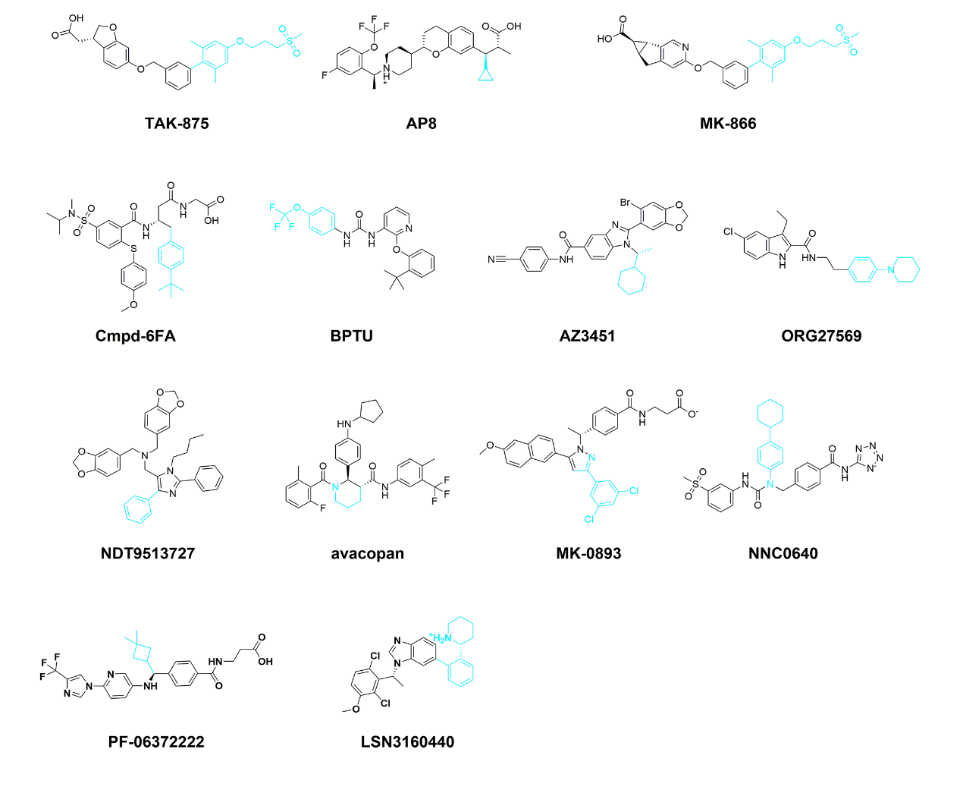 We focused on the interaction between small molecule modulators and lipid bilayers, and the boundary area to inspire the development of allosteric ligands for such allosteric sites.

A. Lipid-Facing allosteric binding sites of class A GPCRs

GPR40 plays a key role in metabolic homeostasis and can be activated by free fatty acids (medium chain and long chain). GPR40 is highly expressed in pancreatic cells, and GPR40 agonists are an important method in the treatment of type 2 diabetes (T2DM).

A total of two Lipid-facing allosteric sites were found on the GPR40 receptor-lipid bilayer interface.

The targeted small molecules are the local agonist TAK-875 and the full agonist Ago-PAM. We calculated the buried area of ​​TAK-875 receptor and the surface area exposed to the lipid bilayer using PISA web server.

The results show that the surface area of ​​TAK-875 exposed to the lipid bilayer is 286.97Å², which accounts for 35.1% of the total solvent accessible surface area (SASA) of the ligand.

β2-adrenergic receptor (β2AR) is a typical Class A GPCR, which is widely expressed in vascular and bronchial smooth muscle.

β2AR is activated by endogenous agonists such as adrenaline to mediate cardiovascular function and pulmonary physiological processes, and is an important target for the treatment of vascular and respiratory diseases.

In addition, it is also essential for overcoming immunosuppression and improving the efficacy of immunotherapy.

Recently, a β2AR positive regulator named Cmpd-6FA (a derivative of Cmpd-6) has been identified.

The allosteric site where the ligand binds is located at the receptor-lipid bilayer interface.

P2Y1 receptors (P2Y1R) are a subfamily of human purinergic GPCRs that play a regulatory role in thrombosis and induce platelet aggregation.

In addition, it also mediates Ca2+ wave propagation, neuronal axonal initial segment (AIS) and inflammatory response and other physiological processes, and is considered a promising drug target for many diseases.

A new type of antagonist 1-(2-(2-(tert-butyl)phenoxy)-pyridin-3-yl)-3-(4-(trifluoromethoxy)phenyl)urea (BPTU) has Developed for the treatment of thrombosis.

Interestingly, BPTU also showed a unique binding model between the ligand and the allosteric site at the receptor-lipid bilayer interface.

PAR2 is highly expressed in many human cells (such as epithelial cells, inflammatory cells and nerve cells) and is associated with a variety of diseases, including metabolic diseases, inflammation and neurodegeneration.

In the past few years, modulating PAR2 function through agonists and antagonists has been considered as a promising therapeutic strategy for modulating specific diseases.

To date, various natural and synthetic cannabinoids and allosteric modulators of the CB1 receptor have been reported for the treatment of various human diseases, such as epilepsy.

Recently, the co-crystal structure of CB1 receptor and its allosteric modulator ORG27569 has been resolved (PDB ID: 6KQI).

The ratio of exposed area to buried area is 0.8583, indicating that the lipid The importance of qualitative bilayer to allosteric sites.

The human C5a receptor (C5aR), also known as CD88, is highly expressed on immune cells such as T cells, neutrophils, and macrophages.

C5a (74 amino acid anaphylactoxin peptide) binds to the receptor and regulates the release of many effective inflammatory mediators.

The C5a/C5aR axis is involved in neuropathic pain events, and C5aR also acts as a pro-apoptotic receptor in neutrophils.

Studies have shown that C5aR is a potential therapeutic target for a variety of inflammatory diseases, including neuropathic and inflammatory pain, sepsis and cancer.

According to reports, the allosteric binding sites of non-peptide antagonists C5aR-avacopan and NDT9513727 are located at the receptor-lipid bilayer interface. 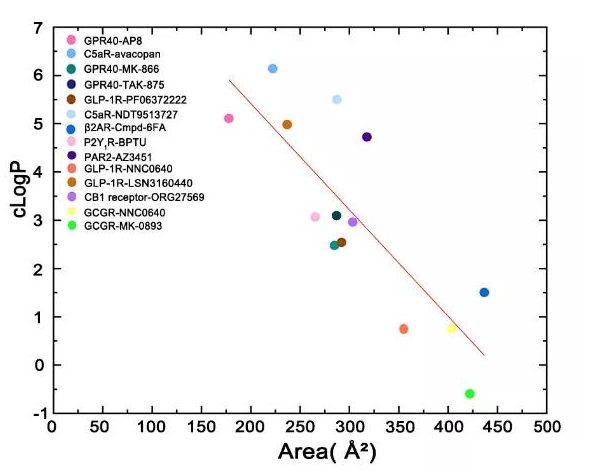 B. Lipid-Facing allosteric binding sites of class B GPCRs

The G protein coupled glucagon receptor (GCGR) is expressed in a variety of human cells (such as kidney, liver, and pancreatic cells).

The activation of GCGR is triggered by the endogenous peptide agonist glucagon.

Targeting GCGR is an important treatment strategy for diabetes.

The binary complex structure of receptor-ligand shows that the allosteric binding sites of MK-0893 and NNC0640 (PDB ID: 5XF1) are located at the receptor-lipid bilayer interface.

The ratio of exposed area to buried area was 0.9377, indicating the contribution of lipid bilayers to allosteric sites.

The GLP-1/GLP-1R system not only mediates the regulation of insulin release and glucose homeostasis, but also plays an important role in cardiovascular activity, gastric emptying and nervous system.

The lipid environment regulates the functions of many GPCRs through the interaction between membrane lipids and receptors.

This can increase the duration of the ligand effect by increasing the collision rate between the ligand and the receptor when small molecules are transferred from the solvent to the lipid bilayer.

For example, the molecular dynamics simulation study of the “P2Y1R-BPTU-membrane” system reveals that the lipid bilayer can reduce the conformational space of small molecules and promote the pre-preparation of small molecule binding gestures.

In addition, there are reports that cholesterol, a representative membrane lipid molecule in eukaryotic cells, may play an important regulatory role in the conformational dynamics, ligand binding and oligomerization of GPCRs.

In recent years, several cholesterol-GPCR complex structures (PDB ID 3EML, 5K2D) that have been resolved indicate that cholesterol binds to the allosteric site of GPCR.

The binding site is located at the lipid-bilayer interface or deep TM region.

The effect is mainly mediated by hydrogen bonds between cholesterol groups and TM surface residues. 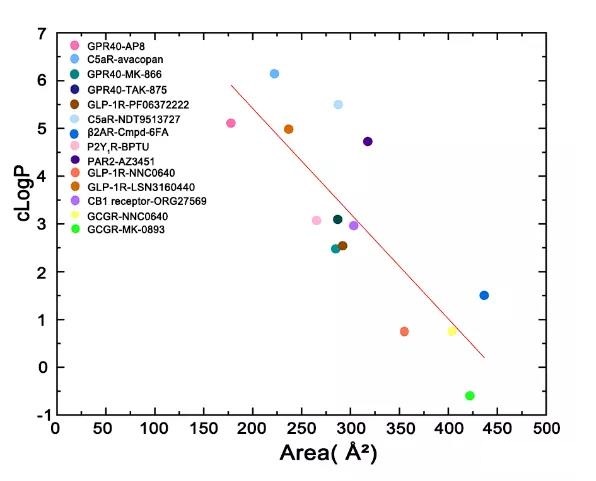 According to the previous summary, when the allosteric modulator binds to the inside of the receptor, the ratio of the exposed area of ​​the ligand to the buried area is mostly less than 0.1, indicating that the surface of the ligand is mainly buried by the receptor.

In contrast, the ratio of the exposed area to the buried area of ​​allosteric ligands targeting Lipid-Facing allosteric sites is mostly higher than 0.5, which indicates that the lipid bilayer is allosteric to the receptor-lipid bilayer. The effect provides an important contribution.

From the perspective of ligand design, these allosteric modulators have two parts, one part is buried under the transmembrane helix, and the other part is exposed in lipids.

The smaller the area of ​​the ligand group exposed to the lipid, the higher the cLogP, which can help people design such regulators in the future to balance the hydrophobicity in protein contact and the size of the exposed part in contact with the lipid bilayer.