Toxicity studies in vaccine clinical development and registration.  Before evaluating the safety and effectiveness of new vaccines in phase I clinical trials in human subjects, non-clinical safety evaluations must be performed in animal models.

Table 1 below lists the main regulatory guidelines for non-clinical research including toxicology.

Europe, the Middle East and Africa (the predecessor of EMA) issued the first regulatory agency guidelines for vaccine non-clinical safety research in 1995, indicating that vaccines are non-clinical safety compared with non-clinical toxicology studies of other types of drugs Evaluation is a relatively new field. Or chemicals. The scope of these guidance documents includes preventive and therapeutic vaccines and adjuvants. Covers a wide range of vaccine types, such as polysaccharide vaccines, recombinant protein vaccines, live or inactivated virus vaccines, protein (toxoid) vaccines and DNA/RNA vaccines.

Since many modern vaccines require the use of adjuvants, the most relevant and widely used guidelines listed in Table 1 are WHO’s 2013 “Guidelines for the Non-clinical Evaluation of Vaccine Adjuvants and Adjuvant Vaccines.” This publication aims to promote consistent and uniform international regulatory expectations for adjuvants and adjuvant vaccines to the National Regulatory Agency (NRA) and vaccine manufacturers. In addition to non-clinical safety assessments, the areas covered also include manufacturing and quality, preclinical immunology, first in human clinical trials, and adjuvant classification.

What is a new adjuvant?

New adjuvants are adjuvants that are not included in the licensed vaccine.

What is the new adjuvant?

New adjuvant vaccines include unlicensed adjuvant vaccines and previously licensed products. The antigen and/or adjuvant production process of these products has undergone major changes, and the main formulation has changed (such as changes in adjuvants or addition of components). Or remove) or new ways of management.

Vaccines are a kind of complex and diverse biological products, in which vaccine preparations are not the final trigger component, and the elements of the immune system are effectors. Therefore, it is necessary to conduct vaccine non-clinical safety studies to evaluate the inherent toxicity of the vaccine, the toxicity of impurities, pollutants or excipients, the toxicity caused by the interaction of the ingredients of the preparation, and the toxicity related to the immune response.

Precautions for animal models used in vaccine toxicity studies include: 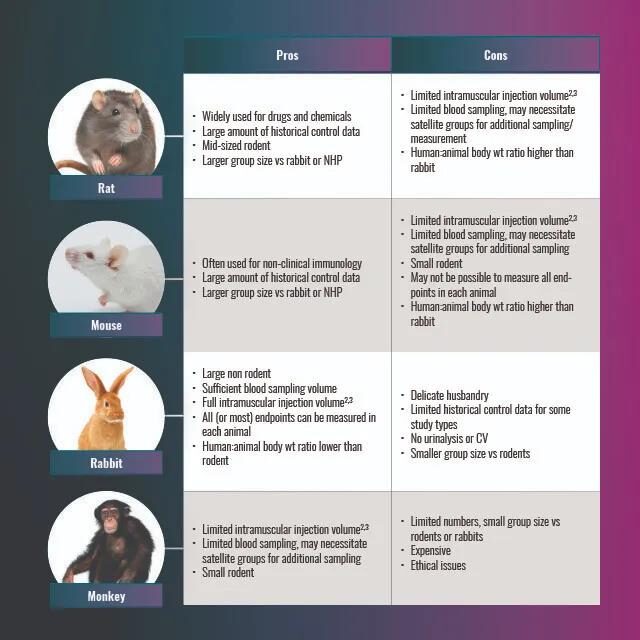 During the clinical development of vaccines, the main types of toxicity studies required for adjuvant vaccines and adjuvant/immunostimulants are summarized as follows:

For GLP toxicity studies, regulatory guidelines require that the article should be the final preparation of the vaccine used in clinical trials, or a batch equivalent to a GMP clinical batch. The characteristics of the batch used for GLP research include identification, concentration, purity (residual cell DNA, RNA and protein), potency, stability, sterility and indeterminate factor testing.

The WHO guidelines indicate that local tolerance can be combined with single-dose or repeated-dose toxicity studies. Rabbits are often used because they can inject a full human dose into a single site intramuscularly. The dose is a fraction of the whole human dose (rabbit) or the whole human dose (rodent). The measured toxicity parameters include mortality, clinical signs and weight gain. Local reactivity was scored based on erythema and edema at 0, 3, 24, 48, and 72 hours after injection. Autopsy analysis includes autopsy (including injection site), macroscopic observation of major organs, and histological evaluation of injection site.

The purpose of this study is to identify and characterize the potential toxic effects of repeated administration of vaccine formulations intended for human clinical trials and final registration.

The parameters that should be considered when planning this study include animal species/strains, clinical plans, dosage forms, dosages and routes of exposure, frequency of human exposure, drug delivery devices, and any previous data formulas that can be used for the same (or similar). The study was conducted through the expected route of clinical administration. In terms of the number of administrations, the dosing schedule is similar to the human schedule, but the interval between doses is similar to the human schedule. In order to maximize the exposure of the vaccine, compared with the human schedule, another injection was made. Therefore, a vaccine with a two-dose human clinical schedule will usually be supported by three-dose toxicity studies. The animals in this study were divided into two autopsy time points after the last injection,

The measurements taken during the study included:

If the vaccine is intended to be administered to fertile women, reproductive/developmental toxicity studies must be conducted in advance. This research is usually carried out before or at the same time as the third phase and is included in the permit application. The most detailed guidance for this type of study is provided in the FDA 2006 guidance. The recommended design is a comprehensive developmental, perinatal and postpartum study, with the most commonly used species being rats or rabbits. An example of a typical rat study design is shown in Figure 1 below and described in Barrow and Segal et al. An immunogenicity assessment is required in large individuals, pups and fetuses to confirm vaccination status. Each test component is cesarean section and parturition period. The former is used to assess fetal development, and the latter is used to assess potential postpartum effects until weaning. 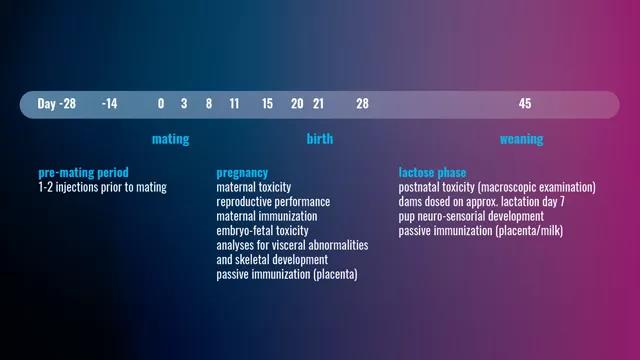 Usually, before mating with untreated males, the females are given one or two injections and several additional doses are given to the females during pregnancy. Give females a further dose during lactation.

However, the “WHO 2005 Guidelines” did not provide specific exemptions for male fertility research, and pointed out that the need for fertility assessment should be considered based on specific circumstances. The need to assess the potential impact of vaccines on male fertility is based on the frequency, number and age of male subjects exposed in the third phase and the final commercialization process, and whether the antigen is expressed in male reproductive tissues.

Vaccine adjuvants are considered to be a new additive that will be administered to humans and tested according to the vaccine environment. In this article, an immunostimulant is defined as a single substance used in combination with a vaccine antigen to enhance the immune response to the antigen, and an adjuvant system (AS) is a combination of immunostimulants. The toxicity test of the adjuvant aims to distinguish the potential effects in the final vaccine and establish safe packaging of AS and/or immunostimulants for various human vaccines. Immunostimulants should be used alone for the following studies:

It can be seen from Table 1 that the non-clinical safety assessment of vaccines is an evolving field, and vaccines are facing more and more regulatory requirements. The 2013 World Health Organization Guidelines provide consistent and uniform international regulatory expectations for adjuvants and adjuvant vaccines. Nevertheless, the non-clinical trials required for adjuvants and adjuvant vaccines still need to be examined on a case-by-case basis.