On February 2, 2021, the trade association BIO of biotechnology companies, academic institutions, national biotechnology centers and related organizations, and QLS Advisors (quantitative life science consulting company) jointly released the latest 10 years of clinical research and development based on the Informa Pharma Intelligence database Biomedtracker A report on the success rate and its contributing factors.

BIO cooperated with a group of data scientists from QLS Advisors, based on its 2016 report on the success rate of clinical drug development, and used machine learning (ML) and artificial intelligence (AI) technologies to quantitatively evaluate drugs approved in clinical trials The characteristics that have the greatest impact, analyze and predict the factors that contribute to drug development.

From the 1,779 companies in the Biomedtracker database in the past ten years (2011-2020), 12,728 clinical and approval transitional drugs out of 9,704 clinical drug R&D projects were recorded and analyzed.

By calculating the ratio of the number of candidate drugs entering the next phase to the total amount suspended by the sponsor, the success rate of drug development in the four phases of phase I, phase II, phase III and regulatory filing is evaluated. Use these data to compare the effects of different diseases, drug models and other factors on drug development, and finally form a more comprehensive comprehensive analysis report that affects the success of biopharmaceutical research and development.

One of the key success indicators used in the report is the overall likelihood of approval (LOA). The LOA success rate is multiplied by the success rates of all four clinical trial phases to calculate the compound probability.

Phase II is still the biggest obstacle to drug development, with only 28.9% of drug candidates entering the next phase;

Among the 14 main diseases, hematology treatment started with the highest LOA (23.9%), which was 7 times that of urology (3.6%), which had the lowest success rate.

Immuno-oncology therapies have achieved rare success in the development of tumor drugs. The overall LOA is 12.4%, while the LOA of all tumor therapies is 5.3%.

Rare disease drugs are very successful, with an overall LOA of 17.0%.

Chronic and high-incidence disease drugs are not very successful, with an overall LOA of 5.9%.

The biological complexity of drug forms usually leads to higher LOA, with CAR-T and RNA interference reaching the highest LOA of 17.3% and 13.5%, respectively.

Research and development projects that use patient preselected biomarkers for trials have twice as high LOA (15.9%), and the phase II clinical success rate is close to 1/2.

The primary factors for success are disease indications, targets, morphology and drug innovation.

This report found that the success rate of Phase II clinical trials is far lower than any other phase.

However, the success rate of Phase I may also be because some of the larger companies will not make the failed Phase I plan public.

The success rate of phase II (28.9%, n=4933) was significantly lower than that of phase 1, and was the lowest among the four research phases.

Among all stages, the success rate of Phase II is always the lowest. This is also a key point in drug development.

The industry must decide whether to conduct a large, expensive phase III clinical study or terminate development-this may be for a variety of reasons, including commercial feasibility.

This is significant because most company-sponsored Phase III clinical trials are the longest and most expensive trials to conduct.

After submitting an NDA or BLA, considering resubmission, the probability of FDA approval is 90.6% (n=1453).

The overall conversion success rate of drug clinical research is shown in Figure 1. 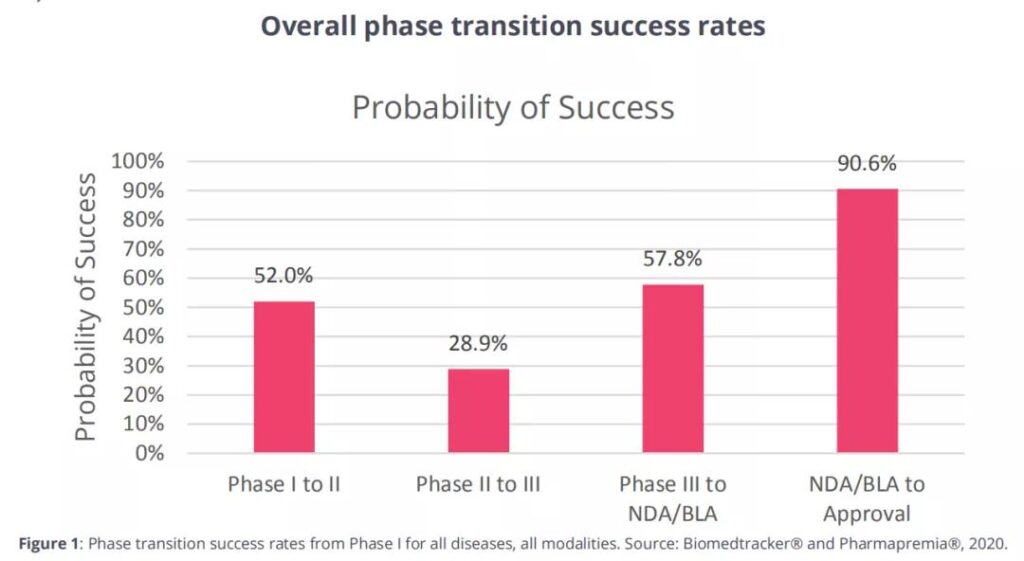 The success rate of entering the next phase by disease type

The remaining diseases include dermatology, nephrology, obstetrics, rheumatism (non-autoimmune indications), otolaryngology/dentistry and orthopedics are classified as “other”.

There are 573 indications under these major diseases. It will be analyzed and discussed in the next report. 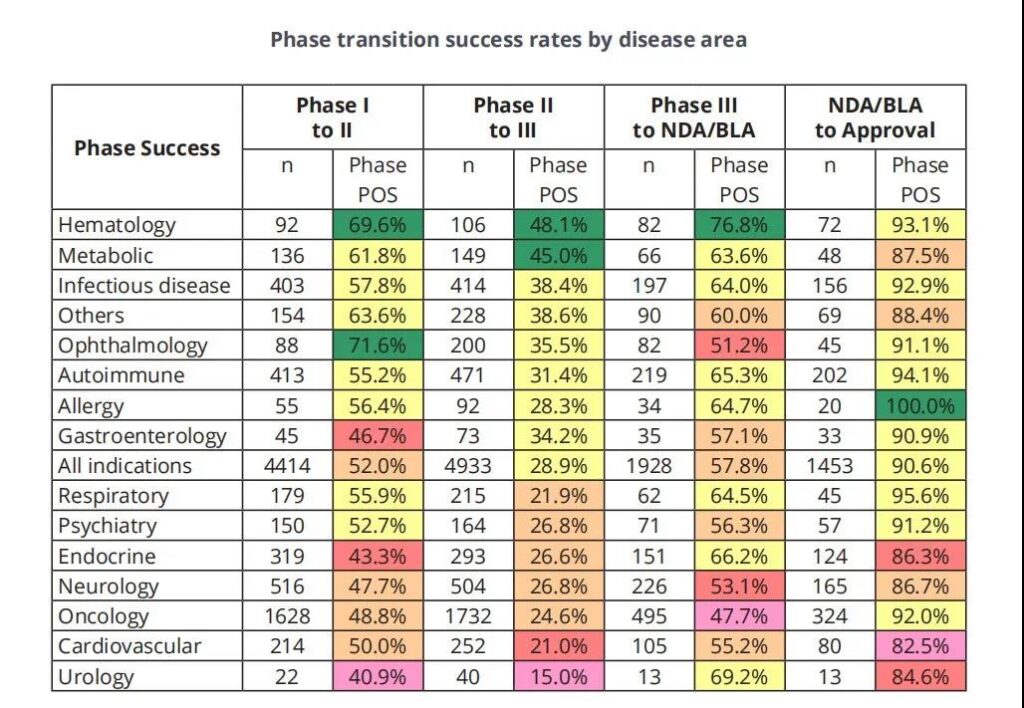 Figure 2 The success rate of entering the next phase by disease type. *The n value is used to calculate the total “entry or pause” transitions for all phases of the LOA. “POS” is the probability of successfully entering the next stage. The order of disease types is consistent with the overall likelihood of approval in the first phase.

Except for these two major diseases, the rest are within a reasonable average range.

The 33% gap between the main diseases is the main cause of the observed overall likelihood of approval (LOA) difference, which will be discussed in the next section.

Only hematological diseases and metabolic diseases (45.0%) have a success rate close to 1/2.

These two diseases are also higher when calculating the overall LOA of stage I, as shown in Figure 5 below.

Similar to stage I, the drug diseases with the lowest transition success rate in stage II are urology, cardiovascular (21.0%) and oncology (24.6%). 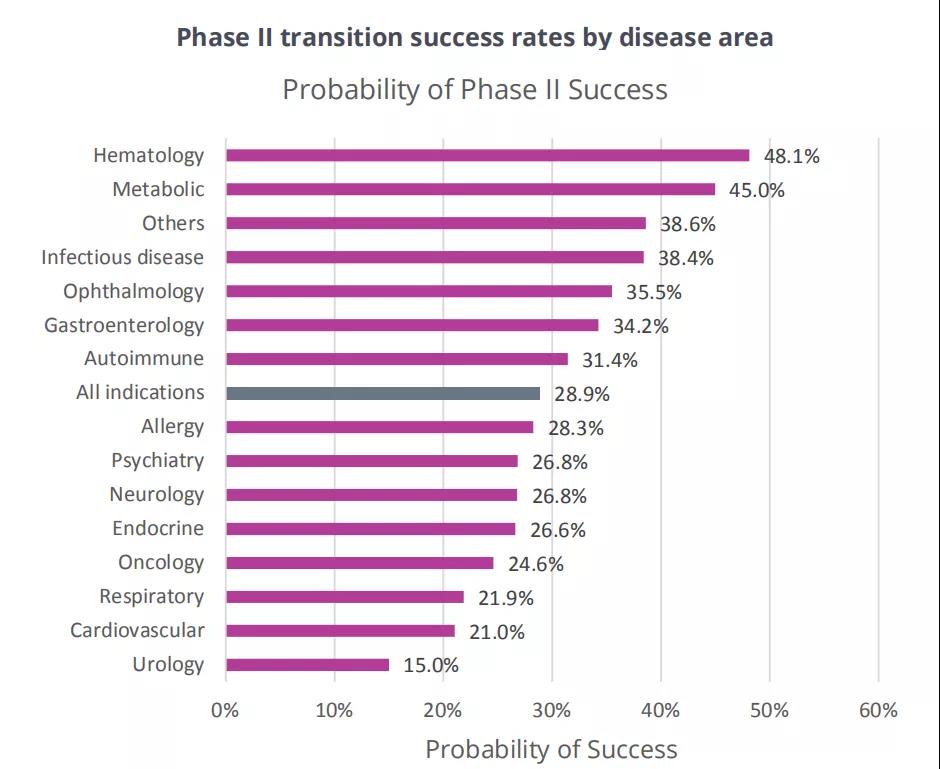 In addition to oncology, there are five other diseases whose stage 3 transformation success rate is lower than the average level of 57.8%, including ophthalmology (51.2%, n=82), whose early performance is better than the average of all diseases.

All disease groups with lower-than-average stage III success rates have a large number of patients. 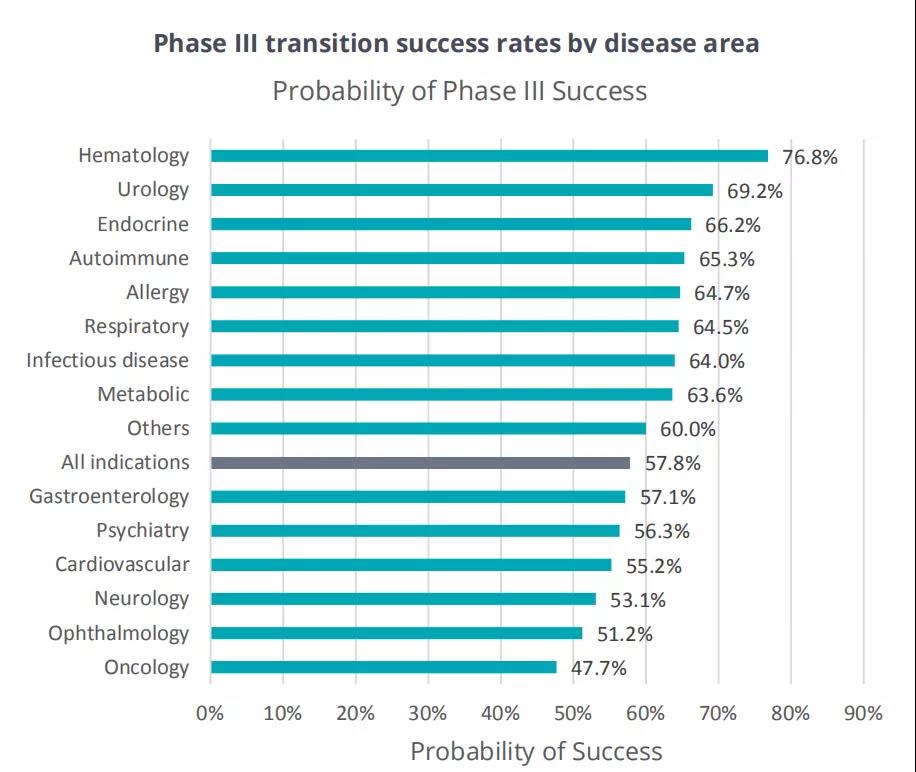 Figure 4 The success rate of phase III transformation by disease

The NDA/BLA conversion success rate (approval rate) for major diseases ranges from 82.5% (cardiovascular) to 100.0% (allergic). These ratios refer to the ultimate success, not the result of the first review.

In some cases, the approval process has more than two complete response letters (CRL) and attempted approval.

This unlimited number of submission attempts resulted in an overall success rate of over 90.6% for all diseases, and during the 2011-2020 approval transition period, only 137 drugs were suspended by sponsors (hence 1316 approvals).

Diseases with higher than average LOA tend to have the shortest development time.

The length of drug clinical trial period varies greatly due to many factors, such as different diseases and indications, best practices of clinical trial design, and patient accessibility. 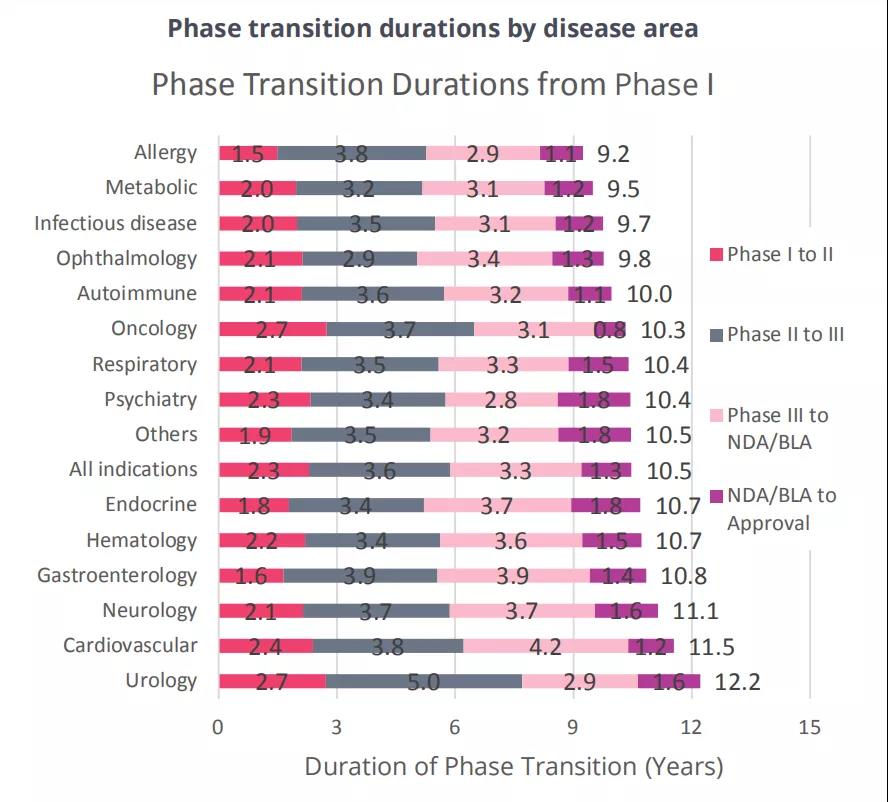 Figure 5 The development cycle of the main 14 disease drugs