Global Phosphorylated Proteomics Study on Recombinant CHO Cell Line.  When studying the proteome of CHO cells, it is important to consider post-translational modifications (PTMs), such as phosphorylation.

Phosphorylation can be used as a molecular switch to phosphorylate and dephosphorylate proteins. An example of this is protein kinase B, which regulates cell survival by being activated after phosphorylation of its Ser and Thr residues. It is estimated that about 30% of proteins are phosphorylated at any time in the cell).

How to determine the potential of CHO cell engineering as the goal to improve the titer and Qp of the product?

First of all, from the perspective of materials and methods.

Each CDCL was cultured in duplicate culture flasks at 150 rpm, 6% CO2, and 36°C. The temperature on the 4th day changed to 32°C. The cells were cultured in the Kuhner shaker ISF1-X (Kuhner) for 17 days. On the 4th, 7th and 10th day, the cells were fed the feed produced by Eli Lilly. If necessary, the cells were also fed with glucose on the 12th and 14th days.

2. Extraction of total protein and digestion of protein in solution.

CDCLs with high and low Qp were grown in a 17-day feeding batch shaker study, and cell pellets were extracted on the 6th and 10th day of culture. The cell pellets were harvested by centrifugation at 1000 g for 5 minutes. The cell pellets were washed with phosphate buffered saline. Use 1mL lysis buffer (7M urea, 2M thiourea, 4% CHAPS, 30mM Tris, pH8.5) to lyse 2 X 106 cells, then centrifuge at 14,000g for 15 minutes, add 0.5M DDT to the lysis buffer, Incubate at 56 °C for 20 minutes. The Bradford assay (Bio-rad) was used to determine the protein concentration. The filter-assisted sample preparation (FASP) method and the C18 peptide purification method were used to prepare 100 μg of each sample for LC-MS/MS analysis. The samples were digested with 1:200 Lys-c and 1:100 sequence-level modified trypsin (Thermo Fisher Scientific).

3. Enrichment of phosphopeptides and digestion of proteins in solution.

An Orbitrap mass analyzer was used for scanning with a resolution of 120,000 (at m/z 200), a maximum injection time of 50 ms, and an automatic gain control (AGC) value of 4 X 105. The top velocity acquisition algorithm is used to determine the fragmentation amount of the selected precursor ion. The isolation width is 1.6 Da and is used to isolate selected precursor ions in the quadrupole. After 60 seconds, the analyzed peptides are dynamically excluded, and only peptides with a charge state between 2+ and 7 will be excluded. The normalized collision energy of 28% was used to fragment the front cursor ions, and the generated MS/MS ions were measured. MS/MS scanning conditions are usually as follows: Joule’s AGC value is 2 X 104, and the maximum file time is 35 ms.

The GO database DAVID (https://david.ncifcrf.gov), TopGene (https://toppgene.cchmc.org) and STRING (https://string-db.org) were used to analyze all the differences List of expressed original proteins. The special gene symbols of the differentially expressed proteins are input into the gene ontology database. These gene ontology databases are used to identify biological functions and molecular processes, which are enriched in our list of differentially expressed proteins.

In addition to titer, Qp, survival rate, and VCD, all CDCLs have many characteristics. CDCLs that are similar in other phenotypic characteristics can be selected in order to have a cleaner background when comparing Qp. Two other parameters that may be important and that are statistically significantly different are: 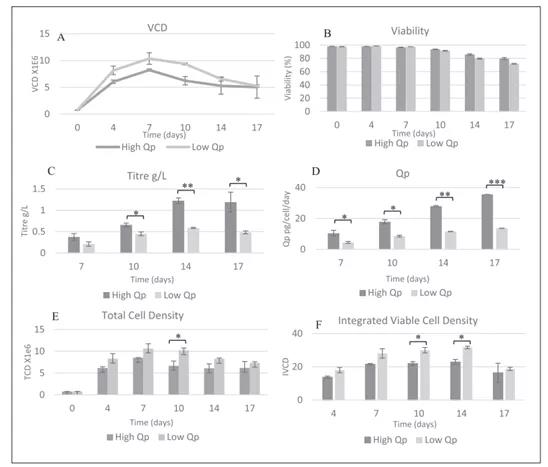 In this study, they also identified several other translation-related phosphoproteins and total proteins, which have different expressions between high and low Qp CDCL (Table 3). Many of these proteins have a special relationship with cell proliferation and the cell cycle of mitosis, and their expression is reduced in high-Qp CDCLs.

Compared with high-Qp CDCLs, these CDCLs may have a lower Qp because they direct their translation machinery to translate cell cycle-related mRNA, although in terms of its VCD, the cell does not seem to reap this reward. However, the low-Qp CDCL did show significantly higher TCD and higher on day 10 and higher IVCD on day 10 and 14.

These proteins and phosphoproteins can be further studied as potential targets for cell engineering of high-Qp CHO cell lines. Reducing the expression of these proteins in the CHO cell line can release the translation machinery, allowing it to focus on translating recombinant protein products. For example, the phosphorylation of EIF4G1 on Ser-1224 can use genome engineering tools, such as CRISPR/Cas9, to determine the specific function of the phosphate site.

Phosphoproteins such as RPL12 and NCL can also be targeted for knockout, trying to release translation capabilities and increase the translation of recombinant proteins. The results presented here also show that reducing the expression of these proteins has almost no negative impact on cell growth, which is ideal for recombinant protein production.

This study conducted a comprehensive phosphoproteomic investigation on high/low Qp industrial-related CHO cell lines, and these cell lines have been fully described at the phenotypic level. These results identify the differentially expressed proteins between high and low Qp CHO CDCLs, which can be further studied as a potential target for rationally engineering CHO cell lines to achieve high-standard production.

The results of this study also show that a major feature of low-Qp CDCLs is high levels of mRNA transcription, which promotes the progression of the cell cycle, although this benefit is not reflected in VCDs with low-Qp CDCLs.