A woman never turns to negative in 216 days after COVID-19 infection.  Low immunity or become a “mutation incubator”?

Data from Johns Hopkins University in the United States at 12:00 on June 7 shows that the cumulative number of confirmed cases of COVID-19 pneumonia worldwide has exceeded 170 million. Some mutant strains with fast spreading speed and high viral load after infection are spreading in many countries.

Previously, there was speculation that some people with immune system diseases or suppressed immune systems may have chronic infections with the new coronavirus. The virus may evolve rapidly in its body.

Recently, South Africa released a case report, revealing the alarming speed of the new coronavirus in the body of immunocompromised people. And how the virus “transforms” in the host body and upgrades to “immune escape”. 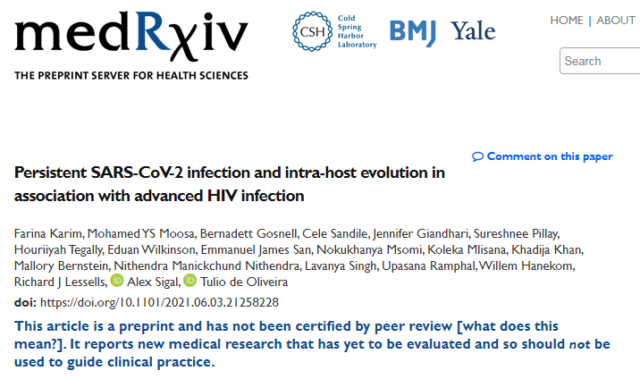 The report shows that in September 2020, a 36-year-old HIV-positive woman in South Africa was admitted to the hospital with a sore throat, cough and difficulty breathing. After the new coronavirus nucleic acid test on the same day, he was diagnosed with COVID-19 pneumonia. She was arranged to stay in a general isolation ward and needed a mask to assist in oxygen inhalation. After 6 days of dexamethasone treatment and a total of 9 days of hospitalization, she was discharged home.

Medical history shows that since 2006, the woman has been receiving antiretroviral therapy (ART). Before the diagnosis of COVID-19, she was using standard treatments such as efavirenz, emtricitabine, and tenofovir, but the results were not good and the HIV viral load has not been controlled. At the same time, the number of CD4+ T lymphocytes in the body is very low. Previous studies have stated that the number of CD4+ T lymphocytes is low, low vitality, or risk factors for the development of severe COVID-19 pneumonia.

The woman was included in a prospective cohort study. On day 0, day 6, day 20, day 34, day 71, day 106, day 190, day 204, day 216 and day 233 of enrollment, the researchers collected their nasopharyngeal swabs And blood samples for nucleic acid testing of the new coronavirus. The samples from day 0 to day 190 were also analyzed for the new coronavirus genome.

The results showed that within 216 days after the diagnosis, although there was no severe illness, the woman continued to be positive for the new coronavirus nucleic acid. At the same time, genome analysis showed that there were 32 mutations in the new coronavirus in his body. Among them, 13 occur on the spike protein, which may have an impact on the virus invading human cells. Another 19 mutations or affect the behavior of the virus.

Among these variants, some have been proven to “have dual threats.” For example, on day 6, the E484K variant was detected in the receptor binding domain (RBD) of the spike protein. The mutant strain Gamma (P.1), which first appeared in Brazil, and the mutant strain Alpha (B.1.1.7), which first appeared in the United Kingdom, all carry this mutation. Brazilian studies have shown that this mutation may enhance the infectivity of the new coronavirus and reduce the effectiveness of antibodies in the human body.

In addition, some mutations are found or can enhance the spread of the virus. For example, the K417T detected on the 71st day and the N501Y mutation detected on the 190th day may cause the virus to increase by 40%-70%. 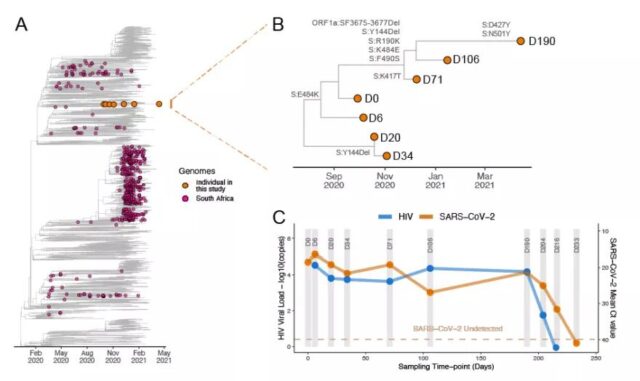 In May, the African Regional Office of the World Health Organization notified the above-mentioned cases. On June 3, the case report was published on the pre-printed platform medRxiv without peer review. Since 2020, this platform and another pre-printed platform bioRxiv have released a large number of new coronavirus studies, which play an important role in the academic community’s understanding of new pandemics.

The corresponding author of the report is Professor Tulio de Oliveira of the Research and Innovation Sequencing Platform (KRISP) of the University of KwaZulu-Natal, South Africa. He also led the team and found the variant Beta (501Y.V2/B.1.351) by analyzing the whole genome of 2882 new coronaviruses collected in South Africa from March 5 to December 10, 2020. The data shows that the variant Beta appeared in Nelson Mandela Bay around August 2020, and became the main epidemic strain in Eastern Cape, Western Cape and KwaZulu-Natal at the end of 2020.

“We must be cautious.” Turio de Oliveira told the Los Angeles Times that it is currently impossible to confirm whether the variant strain carried by the woman has been transmitted from person to person.

He said that this discovery provides a new idea for the academic community, that is, people who have been infected with HIV for a long time but have not received effective treatment are likely to become “mutant factories of the global new coronavirus.” “In South Africa, especially in KwaZulu-Natal province, more than a quarter of adults are HIV-positive. Most people are immunocompromised, which may give the virus a longer time to replicate and mutate.”

The Los Angeles Times commented that the case highlights a difficult fact: the dual infection of COVID-19 and HIV will be a “syndrome” and will increase the difficulty of fighting the epidemic in low-income countries.

Juan Ambrosini, associate professor of infectious diseases at the University of Barcelona, ​​believes that it is indeed important to focus on people who carry both HIV and COVID-19 virus in their bodies. But the aforementioned women may be “an example.”

“We have received’unusual’ cases. Chronic infections with low immunity are likely to be incubators for the mutation of the new coronavirus.” said Jonathan Li, an infectious disease scientist at Brigham and Women’s Hospital in the United States. In the spring of 2020, the hospital received a 45-year-old male patient with COVID-19 pneumonia. The patient received remdesivir and hormone therapy for 5 days and no longer needed oxygen, so he was discharged from the hospital. However, in the next 5 months, he repeatedly developed symptoms of infection, complicated by severe pneumonia, and was finally admitted to intensive care.

Jonathan Lee participated in the treatment. “The patient has a severe autoimmune disease and cannot fight the new coronavirus like other healthy people. This causes his symptoms to improve soon, and the virus will counterattack again. As time goes by, his contagion becomes more contagious.” Jonathan · Li introduced that he has done genome analysis on his virus samples several times and found that some mutations occur every few weeks. The patient died 154 days after the first diagnosis.

In early November 2020, the New England Journal of Medicine released the man’s case report, which did not cause widespread concern. One month later, there was a major turning point in the global epidemic: mutant strains were reported successively in the United Kingdom and South Africa. Among them, some mutations have been detected in the man’s body, including N501Y and E484K mutations. Since then, multiple teams around the world have reported cases of chronic infection.

Of course, the human body can resist itself.

In January 2021, a research team such as the Icahn School of Medicine at Mount Sinai in New York issued a paper in Nature, stating that the human immune system will also change and form new antibodies as the virus changes. Its research shows that within 6.2 months of infection with the new coronavirus, although the neutralizing activity of antibodies in body fluids will decrease, memory B cells continue to evolve, produce somatic hypermutations, and express antibodies with enhanced efficacy and resistance to RBD mutations, and body fluids Immunity has continued to develop. That is to say, memory B cells after evolution may have a higher degree of neutralization, and some antibodies can neutralize more than one virus mutation.