Alzheimer disease (AD) is a central neurodegenerative disease with insidious onset and chronic progressive development. It is the most common form of dementia in the world, accounting for about 50% of all dementia cases- 70%.

The World Health Organization (WHO) predicts that the total number of dementia patients will reach 82 million in 2030 and 152 million in 2050. There are already more than 6 million people suffering from AD in some countries, and it is estimated that by 2050, the number of people suffering from AD will exceed 20 million. It is the region with the largest number of AD patients and the fastest growing rate in the world. AD can cause patients to lose their memory and bring a heavy burden to patients, families, society and medical care!

For a long time, people have conducted a lot of research on the origin and pathogenesis of Alzheimer’s disease, but the etiology is still not clear. There are only two classical hypotheses, β-amyloid and tau protein hypotheses. However, for a long time, many scientists and medical institutions have conducted a lot of drug research and development around the hypothesis of β amyloid and tau protein, and invested tens of billions of dollars in funds, but all failed without exception. This has no doubt, whether there are other pathogenesis of Alzheimer’s disease?

Recently, Dr. David Groth of Curtin University Curtin School of Medicine in Australia and others proposed a new mechanism of Alzheimer’s disease. They believe that the classic stress response pathway-the hypothalamus-pituitary-adrenal axis (HPA) may be the core driving factor for cerebral neuropathy and Alzheimer’s disease.

Specifically, Dr. David Groth proposed that the increase in human age and the accumulation of chronic life stress will cause the HPA axis to become imbalanced, the level of glucocorticoids will rise, and the abnormal microglia will induce chronic inflammation and neurotoxicity in the brain, which will eventually lead to The occurrence of Alzheimer’s disease.

The article titled: Chronic stress and Alzheimer’s disease: the interplay between the hypothalamic–pituitary–adrenal axis, genetics and microglia, was published in the latest issue of Biological Reviews.

In response to this conclusion, the corresponding author of this article, Dr. David Groth of Curtin University, said: “What we know is that chronic stress does affect many biological pathways in our body. Exposure to chronic stress and influences the body’s response to this stress. There are close interactions between pathways. Genetic mutations in these pathways affect the way the brain’s immune system behaves, leading to dysfunction. In the brain, this leads to chronic disruption of normal brain processes, increasing subsequent neurodegeneration and ultimately The risk of dementia.”

Alzheimer’s disease is a common chronic progressive neurodegenerative disease and the most common dementia in the world. Patients often show cognitive decline, abnormal behavior, decline in language and physical ability, and eventually death.

Previously, the main neuropathological features observed in the brains of Alzheimer’s patients were the accumulation of β-amyloid protein, tau protein neurofibrillary tangles, decreased brain metabolism, neuroinflammation, and neuronal death. The progress of neuroimaging further reveals that the above-mentioned neuropathological changes have begun to accumulate decades before the patient’s clinical symptoms.

As clinical trials for Alzheimer’s disease continue to fail, people have been trying new trial designs to intervene for patients with asymptomatic or early cognitive impairment. Therefore, understanding the impact of risk factors on disease progression is critical to the timing and effectiveness of Alzheimer’s disease intervention.

At present, more and more evidences show that chronic psychosocial stress in the early years is an important risk factor for cognitive decline, and it plays an important role in promoting brain pathology and degenerative neuropathy in Alzheimer’s disease.

Under normal circumstances, when the human amygdala detects a pressure stimulus, it immediately activates the sympathetic nervous system, promotes the release of adrenaline, and produces a “fight or flight” response. When under stress for a long time, the hypothalamus-pituitary-adrenal axis (HPA axis) in the human body will be activated and promote the release of cortisol, a glucocorticoid. 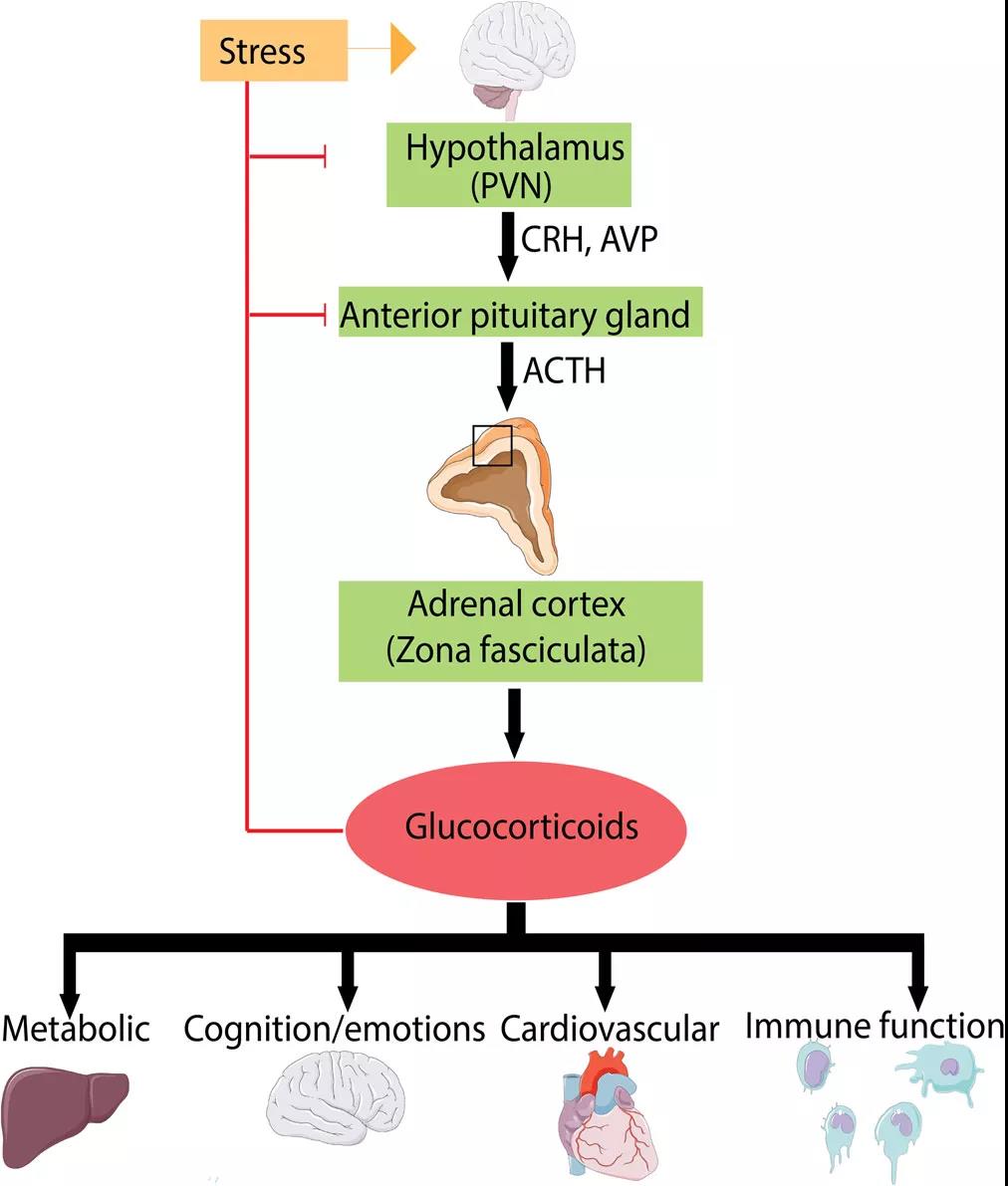 We all know that excessive release of glucocorticoids can trigger a series of adverse reactions, including weight gain, decreased immune function, depression, hyperglycemia, hypertension, osteoporosis, dyslipidemia, diabetes, and so on. Cortisol is mainly involved in changes in the body’s stress response, glucose metabolism, inflammation, cardiovascular function, and mental and emotional state.

Disorders of the HPA axis and cortisol levels are closely related to many diseases including Alzheimer’s disease, and are affected by age. In 1978, Professor Landfield and others proposed that the imbalance of cortisol levels caused by chronic stress will promote the accelerated aging of the brain.

Although the relationship between chronic stress, dysregulated HPA axis and cognitive decline is very close, the molecular mechanism of this has not been known before. Increased levels of glucocorticoids (including cortisol) may lead to cognitive decline through a variety of mechanisms The decline in ability is related to brain atrophy, accumulation of beta amyloid, tau protein, and increased neuroinflammation mediated by microglia, the main immune cells in the brain.

Microglia are resident immune cells in the brain. They are involved in phagocytosis and the production of cytokines and neurotrophic factors. They are closely related to the formation of human memory and brain neurogenesis. Previously, it was generally believed that in the early stages of Alzheimer’s disease, microglia can engulf and clear beta amyloid. However, subsequent studies have found that microglia are highly heterogeneous, with two states: M1 (pro-inflammatory) and M2 (anti-inflammatory).

In recent years, with the extensive research on the TSPO neuroimaging of the brains of Alzheimer’s patients, it has been found that the microglia in the early brain of Alzheimer’s patients will be activated by β-amyloid, and the long-term activated microglia The cells then induce neurofibrillary tangles and cognitive decline. These studies show that microglia play a key role in promoting the accumulation of β-amyloid and tau protein and promoting the decline of cognitive function.

These studies show that changing the function of microglia is the basis for many changes in the brains of patients with Alzheimer’s disease.

Chronic neuroinflammation is a hallmark feature of neurodegenerative diseases, in which microglia can no longer effectively remove beta amyloid or provide neurotrophic support, but instead produce neurotoxic pro-inflammatory cytokines.

This also confirms the “twice-hit hypothesis” previously proposed in the context of major depression, that is, the stress experienced in the early years will cause the microglia to enter the “priming” state, leading to an increase in neurotoxic cytokines, and exposure later in life Changing the structure during the second stimulation caused a more severe microglia response.

On this basis, Dr. David Groth and others proposed a more complete hypothesis: the cascade reaction in Alzheimer’s disease starts with the accumulation of β-amyloid protein, and then the long-term activated microglia. Glial cells drive the accumulation of hyperphosphorylated tau protein. Chronic stress or trauma will promote the long-term activation of microglia through the HPA axis and glucocorticoid pathway and enter the pro-inflammatory phase. When exposed to the secondary stimulation of beta amyloid, it releases a large number of inflammatory factors and drives phosphorylation. The accumulation of tau protein promotes the occurrence of Alzheimer’s disease.

Overall, chronic stress is increasingly recognized as a risk factor for cognitive decline in Alzheimer’s syndrome. Among them, the abnormal secretion of HPA axis and cortisol may be the bridge that mediates chronic stress and Alzheimer’s disease. However, the specific mechanism is not yet fully understood.

In this article, Dr. David Groth combined with previous studies proposed a possible mechanism, that is, chronic stress leads to excessive activation of microglia into a pro-inflammatory state. Under the stimulation of β-amyloid protein, a large number of inflammatory factors are released to drive tau. Protein accumulation promotes the occurrence of Alzheimer’s disease.

In today’s society, with the accelerating pace of work and life, increasing pressure in life affects everyone’s physical and mental health to varying degrees. Identifying the molecular mechanisms of the association between chronic stress and Alzheimer’s disease, as well as identifying genetic factors that may lead to susceptibility to this association, may help determine new therapeutic targets and implement strategies for chronic stress management.