Why are doctors calm even Delta mutants accounting for 97% of total COVID-19 new infection in UK?

In the most recent period, we have been paying attention to the changes in UK epidemic for three reasons:

From the end of May in the United Kingdom, there has been a rapid increase in the number of new cases in a single day, and it has continued to increase. In the past week, the number of newly confirmed cases in the UK was 146,000, an increase of 72% over the previous week; and 97% were Delta mutant strains.
The UK has thus postponed its reopening time to July 19th. 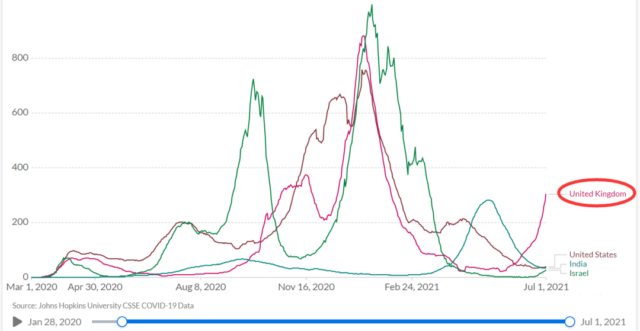 2. The UK has a high vaccination rate.

The UK has the highest vaccination rate among all major countries, with 67% of the population receiving more than one dose of the vaccine, more than 65% of Israel.

Among them, 85% of adult Britons received at least one dose of the vaccine, and 63% of adults were fully vaccinated.

What can we expect from such a high vaccination rate?
image

3. The AstraZeneca vaccine used in the UK has low protection.

About half of the vaccines vaccinated in the United Kingdom are AstraZeneca adenovirus vaccines, which are only 70% protective against wild-type new coronaviruses, and are even more incapable of dealing with mutant strains.
image

(The proportion of vaccinations in different age groups, orange is AstraZeneca vaccine)

Based on the above, the United Kingdom provides a testing ground for how vaccines respond to mutant strains; what happened in the United Kingdom is very enlightening for how other countries can take preventive and control measures.

However, judging from media reports, both British doctors and scientists have responded calmly to the surge in infection in the UK.

From the data provided by the New York Times and The Wall Street Journal, we found the details behind the surge in the number of infections, and it was also the reason why the response of doctors and scientists was calm. 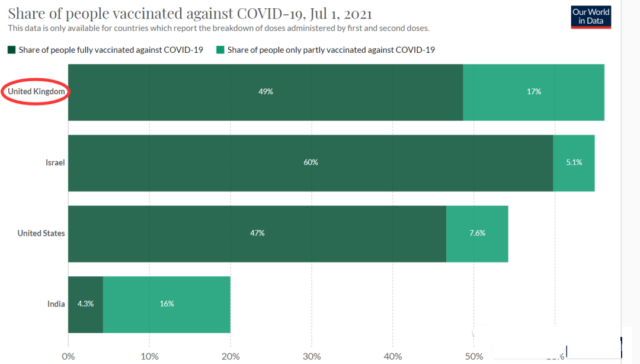 On July 1, 2021, the New York Times reported on data released by the Department of Public Health this Thursday, showing that although the number of COVID-19 cases due to the Delta mutant strain has increased sharply, the hospitalization rate is still very low.

The data shows that from June 21st to 27th, the weekly hospitalization rate in the UK was 1.9 people per 100,000 people, which was the same as the previous week and slightly higher than that of early June.

Looking specifically at the specific situation of the newly infected people in the UK, it will be easier to understand the reason why the number of hospitalizations in the UK has hardly increased.

A. In June, most of the infected were young people.

According to data from the British health department, only 34% of people under the age of 40 in the UK have received one or more doses of the vaccine; this is one of the core reasons why they are susceptible to infection. Younger cases are relatively less likely to be seriously ill, which is one reason why the number of cases in the UK has increased but the number of hospitalizations has not increased.

B. Breakthrough infections in fully vaccinated people, even if they are infected with the Delta mutant strain, basically have mild or no symptoms.

The British health department also emphasized this: it is very necessary to complete the vaccination as soon as possible. 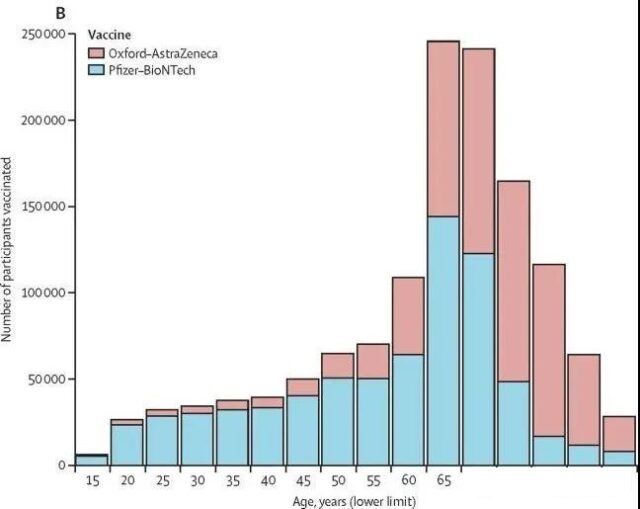 According to data from the British Health Department, as of June 21, of the 92,000 Delta mutant infection cases recorded in the United Kingdom, a total of 117 deaths were reported, of which 50 cases (46%) received 2 doses of vaccine.

At first glance, doesn’t this show that the Delta mutant strain not only caused a breakthrough infection due to immune escape, but also caused the death of the patient?

However, scientists have given an optimistic interpretation of this data: this set of data supports the effectiveness of the vaccine!

First, there has never been a 100% effective vaccine.

Because there are always people with weak immune response to vaccines, especially the elderly, those with immunodeficiency or those who have used drugs to reduce the immune response. Therefore, even though the current COVID-19 vaccine is very effective, there are still people who are still susceptible to the new coronavirus after vaccination.

Secondly, people who died of breakthrough infections in the UK were all over the age of 50.

Third, the case fatality rate of the British Delta mutant COVID-19 is 0.3%.

The analysis of the British health department shows that complete vaccination has 79% protection against symptomatic COVID-19 caused by Delta mutant infection; it reduces the risk of hospitalization due to Delta mutant infection by 96%. The Wall Street Journal further analyzed data from the British health department and showed that full vaccination reduced the risk of death after infection by 95%.

Delta mutant strains are indeed more threatening than other new coronavirus strains. Not only are they more infectious, but they are also more likely to escape the immune response of vaccination; this has led to a surge in the number of people infected with Delta mutant strains in the UK.

This set of data allows scientists to remain calm in the face of the surge in cases of the Delta mutant strain, and is also a key reason for the public to feel at ease.