ecancermedicalscience: Aspirin intake may reduce the risk of death of cancer patients by 20%!

Aspirin intake may reduce the risk of death of cancer patients by 20%!  Although there are many research articles about aspirin and cancer, there are still many doubts about whether aspirin is an acceptable and effective cancer adjuvant treatment.

Recently, in a research report titled “Aspirin and cancer survival: a systematic review and meta-analyses of 118 observational studies of aspirin and 18 cancers” published in the international journal ecologicalscience, scientists from Cardiff University and other institutions in the United Kingdom Studies have shown that if aspirin is used as part of their daily treatment for patients with a variety of cancers, their risk of death may be reduced by 20%. 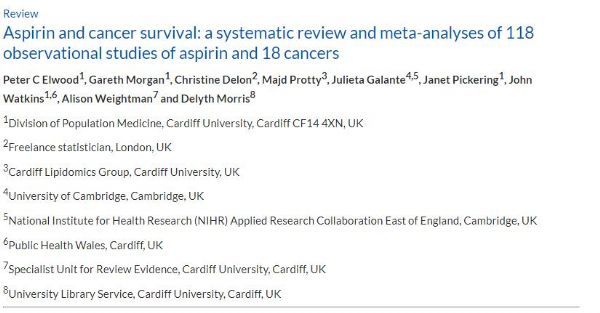 The researchers conducted a systematic retrospective analysis of 118 observational studies covering 18 different types of cancer patients, and found that among the approximately 250,000 cancer patients who reported taking aspirin, the number of cancer deaths decreased by approximately 20 %. The existing evidence on the efficacy and safety of aspirin justifies its use as an adjuvant treatment in a wide range of cancers, and patients should probably be informed of this.

Researcher Professor Peter Elwood said that I have been conducting research on the therapeutic effects of aspirin for more than 50 years. In recent years, our research team has been constantly shocked by the biological mechanisms of aspirin and cancer, and these effects seem to It is the same in many different cancers. Therefore, the researchers wanted to analyze relevant research reports on the use of aspirin as an additional therapy for cancer.

In general, the researchers found that at any time after the diagnosis of cancer, compared with patients who did not take aspirin, patients who took aspirin had a 20% higher chance of surviving. In addition, the researchers also considered taking aspirin. For the risks and harms, they wrote to the authors of each paper to ask the subjects in their articles if they had gastric bleeding or other bleeding events. A small number of patients have experienced bleeding, but there is no evidence that patients taking aspirin have any excessive deaths attributable to bleeding.

Researcher Elwood said that the research in this article shows that aspirin not only helps reduce the risk of death in cancer patients, but also reduces the spread of cancer in the host body (commonly known as metastatic spread). Nowadays, there is a lot of research evidence that the death rate of cancer patients taking aspirin will be significantly reduced, and this benefit does not seem to be limited to one or several cancers. Therefore, aspirin seems worthy of serious consideration as an adjuvant treatment for cancer, and cancer patients and their caregivers should also be informed of the current evidence, but the researchers emphasize that aspirin is not an alternative to any other treatment. 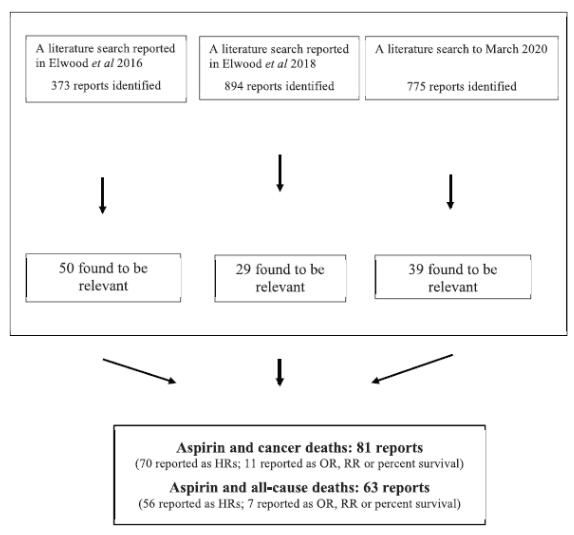 The flowchart describes the results of three systematic literature searches.

In 1974, researcher Elwood and his colleagues first studied that taking an aspirin daily may reduce the risk of death from heart disease and stroke by 24%. This research report received global attention in 1990 and was named one of the 50 most important studies published since 1945 by BMJ magazine. Elwood said that our initial research has stimulated a new stage of aspirin research work; when this article was published, there were about 100 clinical research reports on aspirin every year, but now, there are more than 1,000 research reports every year. And some clinical trials have been established to test the application of aspirin in cancer treatment, and the results of these trials may provide further clear evidence. Further research on aspirin and cancer treatment will obviously have greater value in the future.

In summary, the research in this article points out that there is considerable evidence that the mortality rate of cancer patients taking aspirin will be reduced by about 20%, and this benefit seems to be not limited to one or more cancers. Therefore, aspirin seems worthy of serious consideration by scientists as to whether it can be used as an adjuvant treatment for cancer, and cancer patients and their caregivers seem to have the right to know the existing data.