Are COVID-19 vaccines still effective against the Delta strain?  After the vaccination was completed, people infected with the Delta mutant strain had no significant difference in viral load compared with those who had not been vaccinated.

On July 30, the United States CDC (hereinafter referred to as CDC) a document on the effectiveness of Delta variant strains and vaccines was exposed by the media.

Subsequently, the CDC published the details of this document on its official website, reminding us: Delta variants are extremely capable of spreading. Strong, the ability to break through the existing vaccines in the United States is also stronger than other mutants, and confirms a worrying fact-after the completion of vaccination, people infected with the Delta mutant strain are compared with those who have not been vaccinated.

There is no significant difference in capacity. The CDC pointed out that these vaccinated infected people also have the ability to spread the epidemic, and proposed that the epidemic prevention strategy should be changed, and the vaccinated population should also pay attention to protection and wear masks.

A person infected with Delta can infect 8-9 people

The CDC pointed out in the document that the current Delta variant has the same transmission ability as chickenpox, and an infected person can infect about 8-9 people. 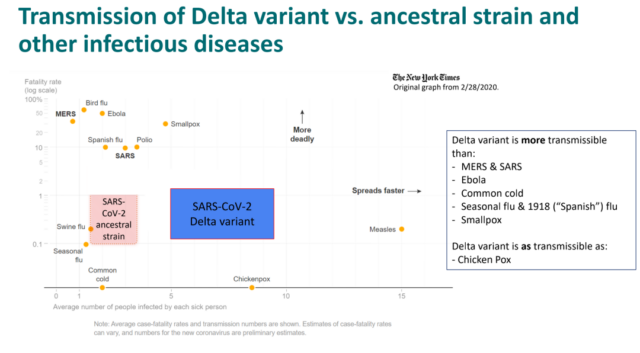 In the figure above, the ordinate represents the lethality intensity, and the abscissa represents the transmission intensity. As can be seen from this picture, the Delta mutant strain has completely opened the gap with the early wild-type new coronavirus in terms of transmission ability, and its lethality is also higher than that of the wild-type — but the specific increase is actually still Under research.

The transmissibility of Delta variants is not only stronger than that of wild-type COVID-19, but also stronger than SARS, MERS, Ebola, common cold, influenza and smallpox. Chickenpox, which has a similar transmission ability, is far less lethal than it.

The most important news that ignited public opinion in the CDC’s internal documents is probably that patients who were infected with the Delta mutant after being vaccinated have the same viral load as those who have not been vaccinated. Indeed, there is indeed such a paragraph in the document (see the picture below), and the CDC even bolded the “no difference” itself.

Screenshot of the original CDC file

This discovery also led the CDC to believe that patients infected with Delta after vaccination have the same ability to spread the epidemic as those who have not been vaccinated.

Screenshot of the original CDC file

After learning of this news, some mainstream media, international media and commentators in the United States raised a concern: whether the infected person after vaccination will be asymptomatic for longer due to vaccination, and because the viral load does not decrease, It is more likely to infect others. These people relax their vigilance after vaccination, which will also lead to the spread of the epidemic.

Subsequently, the CDC announced the details of this cluster of breakthrough infections.

This cluster of outbreaks occurred in Barnstable County, Massachusetts, and 469 cases of infection occurred during July, which is believed to be related to summer gatherings in the area.

CDC statistics pointed out that there is a fairly obvious correlation between large-scale gatherings and the increase in the number of infections, and released a corresponding statistical chart—— 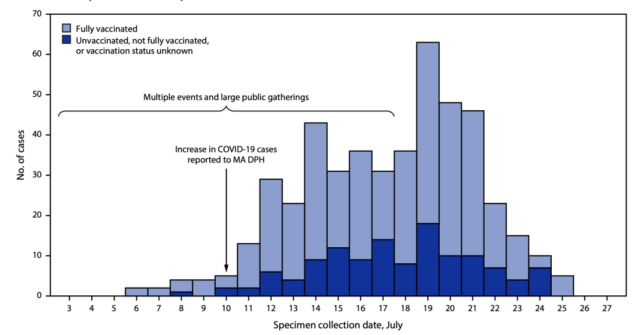 The above figure shows that there were a number of large public gatherings held in the area in mid-to-early July, and the number of infected cases gradually began to rise from mid-July. There is a certain time difference between the start of the gathering and the sharp increase in the number of infections ( In this case it is about 10 days). The light part in the figure represents the number of cases that have completed vaccination, and the dark part represents cases that have not been vaccinated, not vaccinated, or whose vaccination status is unknown.

Testing of 127 infected persons who completed vaccination and 84 uninfected, unvaccinated (at least 65 people) and unidentified infected persons found that there was no significant difference in viral load between the two parties. 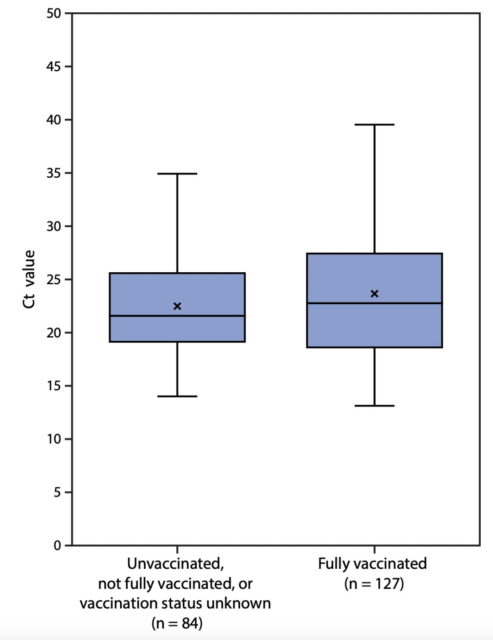 Regarding this situation, the CDC has not announced whether the same viral load affects the development of the disease or whether it affects long-term sequelae, etc., nor has it explained why the infection after vaccination has the same viral load as those who have not been vaccinated. And believe that this report is temporarily unable to make a conclusion on whether the vaccine can effectively fight against the new coronavirus variants (including Delta).