Delta Variant: Why has the epidemic become so severe in Southeast Asia?

The “Delta” COVID-19 variant strain is raging around the world, and the epidemic situation in many countries and regions has rebounded, and there has even been the most serious wave of epidemics since the outbreak.

The situation in Southeast Asia is particularly serious.

According to CNN, the increased infectivity of the delta mutant strain is rampant and the vaccination rate is relatively low. The combination of the two has led to a surge in confirmed cases and deaths in many Southeast Asian countries, a shortage of medical resources, and the epidemic in many countries has reached a critical point.

Since the COVID-19 epidemic became a global pandemic last year, Southeast Asia has always been a relatively successful area for epidemic prevention and control, and confirmed cases and deaths have been controlled at a relatively low level.

Since then, although several small peaks of the epidemic have appeared in some countries, the overall situation is still under control. However, in recent months, there has been a major outbreak in Southeast Asia, and many countries have ushered in the most serious wave of epidemics since the outbreak.

Thailand: 96% of cases are from the third wave

In Thailand, data released by the Thai Ministry of Public Health on August 5 showed that 20,920 new confirmed cases were confirmed in the country in the past 24 hours, and the number of newly confirmed cases in a single day exceeded 20,000 for the second consecutive day, reaching the highest number since the outbreak. The highest value. 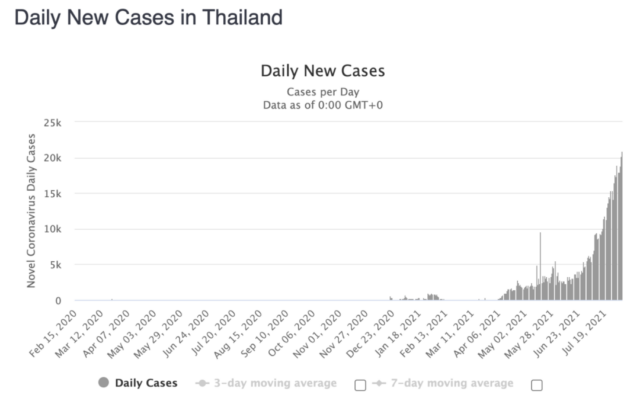 The same is true for deaths. On April 1 this year, Thailand had a total of 94 deaths. As of August 5, the cumulative number of deaths in Thailand reached 5,663, and 5,569 new deaths were added in the third wave of the epidemic. 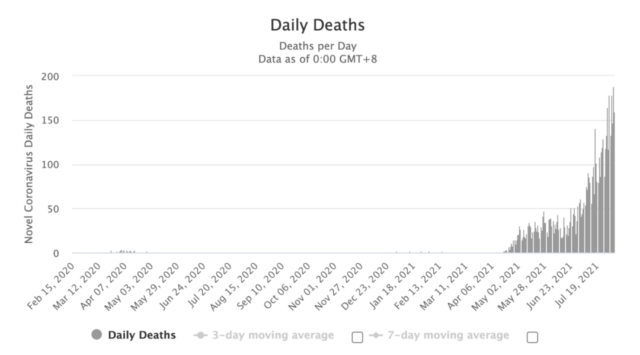 The sudden increase in the epidemic has caused Thailand’s medical system to be on the verge of collapse. According to Reuters, in Bangkok, the capital of Thailand, hospitals are already overwhelmed and there is a serious shortage of beds. This has caused tens of thousands of patients to have to enter the home treatment and community treatment systems to alleviate the shortage of resources.

In addition, the Thai health department converted the cargo building of Bangkok Airport into a square cabin hospital to accommodate more patients. Another 15 passenger trains were temporarily converted into community isolation centers.

In order to alleviate the epidemic, the Thai government has extended the blockade measures again until August 17, prohibiting gatherings that risk the spread of the epidemic in the entire territory. Offenders will be sentenced to a maximum of 2 years in prison and a fine of 40,000 baht.

In Malaysia, the country’s new confirmed cases exceeded 20,000 for the first time on August 5, a record high since the outbreak. On the same day, there were 164 new deaths in the country, which brought the cumulative number of deaths in Malaysia to more than 10,000.

According to a report by Channel News Asia, Malaysia’s latest wave of outbreaks began in July on a large scale. Since then, new confirmed cases and new deaths have increased exponentially. Up to now, the cumulative number of confirmed cases in Malaysia has exceeded 1.2 million. 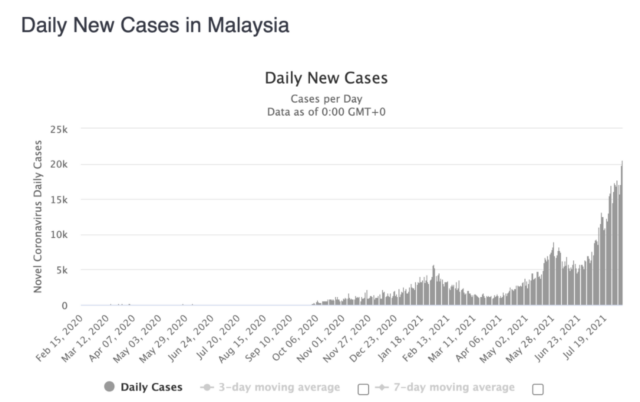 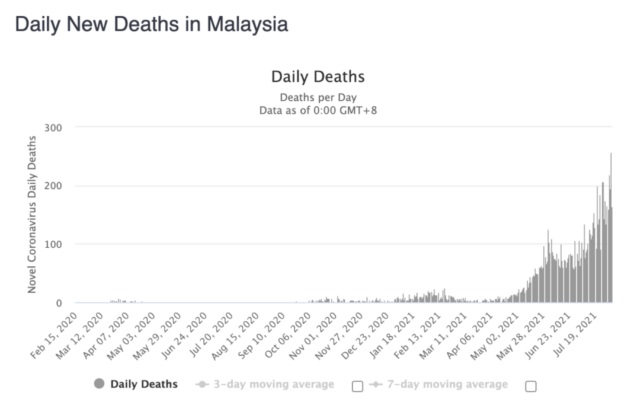 In addition, the number of patients entering the intensive care unit in Malaysia has reached a new high, with a total of 1078 currently. Of these, 549 needed breathing assistance.

The surge in cases has overwhelmed the Malaysian medical system. Last week, thousands of Malaysian doctors went on strike to protest the lack of medical resources in hospitals and the overload of medical staff.

As the epidemic has not been effectively controlled, the Malaysian government announced on June 28 that the nationwide blockade will be extended indefinitely.

Vietnam: Death cases increased by nearly 97% in the past month

In the more than a year since the outbreak, Vietnam’s epidemic prevention and control has been relatively in place, and people’s lives have basically remained normal. The country is also one of the few countries that will achieve positive economic growth in 2020.

However, starting from the end of April this year, the epidemic in Vietnam began to worsen. Especially in July, the number of confirmed cases and deaths of COVID-19 in Vietnam has exploded.

According to worldometer statistics, as of August 5, the cumulative number of confirmed cases in Vietnam exceeded 180,000, of which more than 85% were newly added in the past month. Of the 2,720 deaths since the outbreak, 2,630 were from the past month, accounting for nearly 97% of the cumulative deaths. 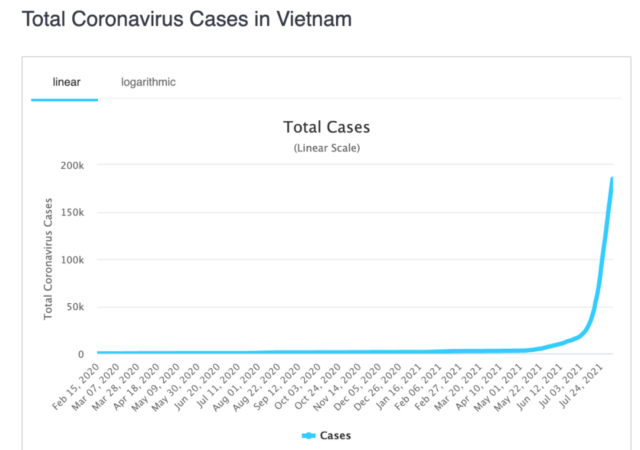 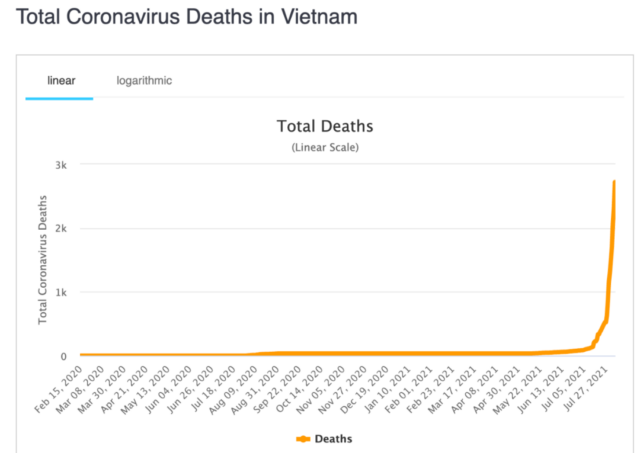 In this round of epidemics, Ho Chi Minh City, Hanoi City, etc. have the most severe epidemics. In order to control the epidemic, the Vietnamese government has extended the blockade period in these areas.

As the world’s fourth most populous country, Indonesia has recently replaced India as the center of the COVID-19 epidemic in Asia.

According to Worldometer statistics, of the 3.56 million confirmed cases confirmed so far in Indonesia, more than 1.2 million were newly added in the past month. 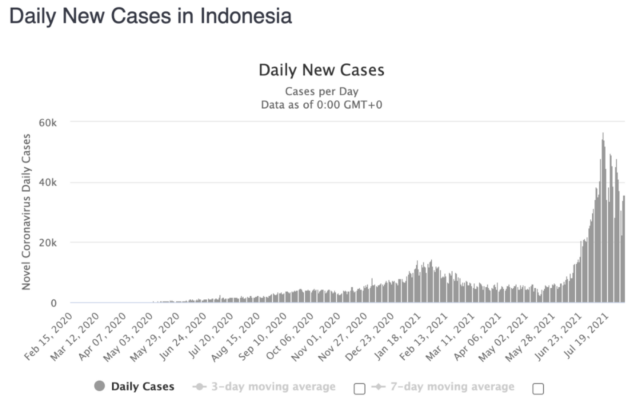 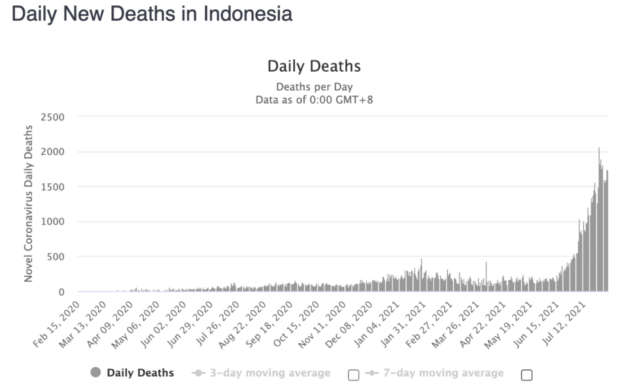 CNN reported that the real situation in Indonesia may be worse than official statistics, because many people cannot be tested. As the epidemic worsens, Indonesia is facing a health crisis, and the problem of insufficient medical resources is particularly prominent.

In order to control the epidemic, the Indonesian government announced on August 2 that the highest-level level 4 blockade in the capital Jakarta, Java Island, Bali and other places was extended by one week.

Southeast Asia is ushering in a major outbreak, on the one hand, it is affected by the delta mutant strain, on the other hand, because the vaccination rate in this region is relatively low.

According to statistics from Our World in Data, as of August 4, among the 96 million people in Vietnam, only 0.8% had completed vaccination, and 7% had received at least one dose of the vaccine.

There are many reasons for the relatively low vaccination rates in countries such as Vietnam, Thailand, and the Philippines.

According to a report by Lianhe Zaobao on August 4, the Vietnamese government had previously admitted that the shortage of vaccines was the main reason for the country’s slow vaccination rate. Vietnam has received 17.6 million doses of COVID-19 vaccine, including Sinopharm, Pfizer, AstraZeneca, Moderna, and Russian Satellite V. More than 16 million doses have been distributed, but only about 700,000 have been vaccinated.

In the face of increasing epidemics, these countries are working hard to speed up vaccination work.

According to Bloomberg News, due to the dual impact of the spread of the delta mutant strain and the low vaccination rate, Southeast Asia has become one of the hottest areas in the world, which has severely affected the financial markets of some countries.

In addition, studies have shown that Southeast Asian manufacturing was hit hard in July by the epidemic. Some economists pointed out that some Southeast Asian countries have very low vaccination rates, which has led to continued blockades in many areas and the closure of factories.

In fact, many people are dissatisfied with the spread of the epidemic, the slow vaccination rate, and the continued blockade.

According to CNN, on August 1, thousands of protesters staged anti-government demonstrations in many places in Thailand. Protesters drove cars and rode motorcycles to hold “car parades.” They accused the Prayut government of failing to respond to the epidemic and demanded that Prime Minister Prayut resign.

Some protesters pointed out that the epidemic has severely affected their lives, and the Prayut government’s slow vaccination campaign has made it difficult to control the epidemic.

In Malaysia, anti-government demonstrations also broke out last weekend. Many people believe that the government has not responded well to the epidemic and demanded the resignation of Prime Minister Muhyiddin.

On August 2, some opposition lawmakers also marched in the Parliament building, demanding Muhyiddin to step down. However, Muhyiddin refused to resign on the 4th, saying that he would establish his legitimacy as prime minister in a vote of confidence in September.