The drug resistance of cancer cells is one of the main reasons for the failure of cancer treatment, which may cause the cancer to recur quickly and eventually cause death. While persistent cells in tumors can promote this resistance, there is now a way to describe the characteristics of these cells in detail to help understand their origins and coping strategies.

Drug resistance, also known as drug resistance, generally refers to the decrease or even disappearance of the drug’s sensitivity to the drug after the pathogen has been in contact with the drug for many times, resulting in the decrease or ineffectiveness of the drug’s efficacy against the pathogen. Understanding how resistance to chemotherapy develops may lead to better anti-cancer treatments.

When a portion of tumor cells called persistent cells survive chemotherapy, the cancer will recur.

In the presence of therapeutic drugs, most of these persistent cells are non-dividing (static), but during the treatment process, a rare subpopulation can re-enter the cell cycle so that they can proliferate.

Many studies have focused on the genetic mechanism of this drug resistance. However, emerging data suggests that non-genetic mechanisms (such as DNA and protein complex chromatin changes) may also play a role in the development of persistent states.

Recently, researchers published an article “A persistent look at how tumours evade therapy” in Nature.

Oren et al. studied the cell lineage and gene expression profile of persistent cells by using a method called DNA barcoding to track tumor cells and their offspring. Their findings clarified the role of non-genetic and reversible mechanisms in a series of tumor chemotherapy resistance in different tissues. 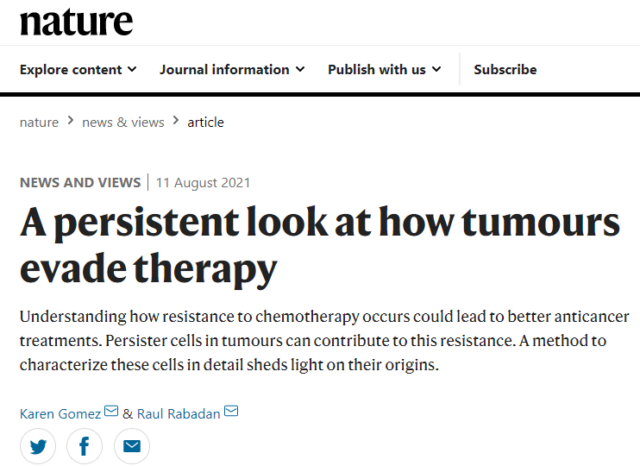 The authors analyzed the cell division of human lung cancer cells cultured in vitro. These cells have mutations in the gene encoding the epidermal growth factor receptor (EGFR). Treat cells with osimertinib, an inhibitor of this receptor.

These results indicate that these periodic and non-periodic continuous cells appear early in the treatment process and that they have evolved from different cell lineages.

In order to describe the molecular mechanisms associated with periodic and non-periodic continuous cells, the authors developed a system called “Watermelon”, which tracks the lineage, proliferation state, and transcription state of each cell at the same time (pictured).

In order to determine whether the persistent state is due to the inherited and irreversible characteristics of persistent cells, the authors re-exposed the persistent cell population to osimertinib after the treatment was suspended. They found that both types of cells regained drug sensitivity, indicating that a non-genetic, reversible mechanism is the basis for persistence. 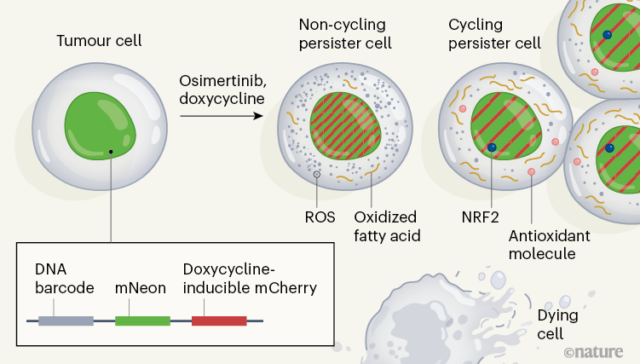 The authors used single-cell RNA sequencing methods to assess gene expression at different time points during the two-week treatment period and compared the characteristics of periodic and non-periodical.

The unique feature of cyclic persistence is the up-regulation of the defense program that produces antioxidant molecules, including the expression characteristics of antioxidant glutathione metabolism, and the production of protein NRF2, which is a transcription factor induced by oxidative stress.

In addition, the expression of several NRF2 target genes related to lineages with a large number of progeny persistent cells, and the genetic engineering of cells consumes the negative regulator of NRF2, resulting in a periodic increase in the proportion of persistent cells.

Osimertinib can induce the formation of reactive oxygen species (ROS), which can cause oxidative stress. At the end of treatment, the ROS level of cyclic persisters was significantly lower than that of non-period persisters. When the authors reduced the level of ROS in cells by adding ROS scavenger molecules, the proportion of cells with continuous cycles increased. Therefore, these analyses indicate that the redox state of the cell plays a role in the regulation of cycle persistence.

Recognizing that redox balance is related to metabolism, the author analyzed the metabolites of cyclic and non-period persisters, and identified 56 products with different abundances between these two cell populations. The authors found that in the cyclic state, the fatty acids associated with the carnitine molecule (a result of a preliminary step in fatty acid oxidation) are more abundant than in the acyclic state.

In order to test whether their observations exceed the model system of lung cancer, Oren and others used melanoma, lung cancer, breast cancer and colorectal tumors to make more types of human cancer “watermelon” models. They treat the cells with appropriate inhibitors, which are characteristic of chemotherapy and depend on the genes of the particular cancer. In most models, cyclic persisters showed higher fatty acid metabolism, antioxidant response, and NRF2 characteristics compared with non-period persisters, indicating that the authors’ findings extend to cancer types other than lung cancer.

The results of these in vitro studies were verified by an engineered mouse model in which the animal has an inducible mutation of EGFR in lung tumors. After osimertinib treatment, compared with untreated mice, persistent cells have higher levels of ROS and fatty acid metabolism characteristic gene expression characteristics. The authors also evaluated the changes in gene expression in cell samples from patients with EGFR-driven lung adenocarcinoma before and after chemotherapy. These patients have melanoma driven by BRAF enzyme mutations (treated with BRAF inhibitors and MEK enzyme inhibitors), and HER2 protein Breast cancer caused by mutation (treatment with lapatinib). In all these cases, compared with untreated tumor cells, the characteristics of ROS generation and fatty acid metabolism in persistent cells increased after treatment, and cyclic persistent cells were higher than non-cyclic persistent cells.

The research of Oren and his colleagues fits into the broader context that currently emphasizes the importance of non-genetic mechanisms in continuous cell survival and proliferation. When studying persistent tumor cells, a major problem is that they account for only a small part of the initial tumor cell population, so it is difficult to determine their characteristics by sequencing the cells in batches. The value of the author’s “watermelon” method is that it can describe the persister in detail at the resolution of a single cell. One direction in the future may be to apply similar single-cell methods to study the non-genetic drug resistance mechanisms of other types of cancers, such as pancreatic cancer or prostate tumors. Research in these areas is emerging.

Understanding the dynamics of persistent cells is essential for the development of more effective cancer chemotherapy. Previous studies have found that the response pathway to estrogen (which has an effect in breast cancer) and the pathway related to the cell death process are related to the persistence state. Oren et al. found that although inhibiting these pathways did reduce the number of persistent cells, the proportion of periodic persistent cells increased, indicating that these are not the best targets for chemotherapy.

In contrast, the authors report that the use of the inhibitor drug etomoxir to inhibit the fatty acid oxidation pathway results in a decrease in the proportion of cells that persist and the proportion of cells that continue to cycle. This exciting result shows that the regulation of this pathway and the genes associated with this pathway are worth considering when developing new therapeutic strategies.