In February of this year, Sohn, the protagonist of the incident, developed a screening method for “early breast cancer blood test”, which was reported by major media. Sohn was also invited to China for academic exchanges, but soon the research was questioned. Data falsification and infringement of the intellectual property rights of others. The incident caused the resignation of three senior hospital officials, including the dean, and Sohn himself was deprived of some of his rights.

At the beginning of the year, Sohn, director of the Department of Gynecology, Heidelberg University School of Medicine in Germany, published a piece of news on the official website of the hospital where he worked and HeiScreen, claiming that he and his team had jointly developed a new breast cancer screening method-blood liquid biopsy. This method can detect 15 tumor-related biomarkers in the blood, and the sensitivity to breast cancer is 80%-90%. At that time, major medical media reported the incident with adjectives such as “sensational world”, “medical breakthrough”, and “milestone in the medical field”. 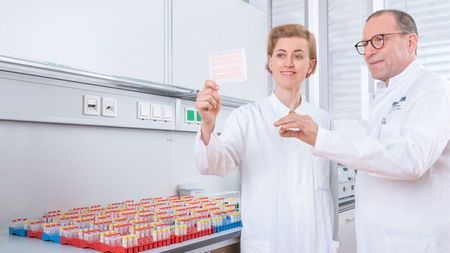 Sohn vowed: “The blood testing method developed by our team is a revolutionary method that uses biomarkers in the blood to achieve non-invasive and rapid screening of breast cancer. It may enter the market this year and benefit the majority of women. .”

Sohn also said that this screening method will not replace breast X-ray examination, but it is likely to become a method for early breast cancer screening to prevent patients from being exposed to X-ray radiation. He emphasized that the false-positive results of this screening method are significantly lower than that of X-ray examinations. Depending on the age of the patient, the false-positive rate is usually between 5% and 10%.

In other words, with this method, women only need to take blood tests to detect possible early signs of breast cancer.

Suddenly, Sohn became a “red man” in the field of breast tumors, and he was also invited to participate in an expert exchange meeting in Beijing. The theme at that time was “promoting the landing of new breast cancer detection technologies in the Chinese market.”

Question: Promoting this screening method is tantamount to crime

However, since the end of March, the screening method has been widely questioned and strongly criticized by the industry. The reason is the lack of clinical research evidence and public results that prove that blood tests are indeed effective.

This is simply an unfinished study!

Even more “face-slapped” is that this research result contradicts Sohn’s speech at an academic conference.

According to the German online magazine MedWatch, the slides of Sohn’s speech at the time showed that the specificity of the test was 45% to 73%, which means a false positive rate of up to 55%, which means that approximately every 2 patients do not have breast cancer. Of women will get a positive result.

This is an unusable screening method.

Nevertheless, in the press conference at the conference, Sohn’s partners and the CEO of HeiScreen website strongly praised this research. No matter how the reporter asked, Sohn only talked about the sensitivity of the screening method and refused to discuss its false positive rate.

A professor at the Max Planck Institute for Human Development expressed strong objections to the study. He said that the promotion of this screening method is “completely unacceptable behavior” and “trying to reduce The introduction of such screening methods to the market is tantamount to a crime.”

In May of this year, faced with reporters’ guns and guns, Sohn explained that the study he published on the hospital’s official website included only young women, and mammograms were of little help in the diagnosis of such groups. The hospital argued that Sohn is responsible for communicating the false-positive rate of the study, but the hospital is not responsible for comparing academic slides with previous studies published on the website.

The hospital’s reputation was damaged, and 3 senior executives including the dean resigned

The good news is that Heidelberg University did not evade the questioning. The school quickly responded positively and entrusted the investigation to an external investigation team, striving to find out the facts quickly and comprehensively.

In July, the hospital committee announced the results of the preliminary investigation and stated that the study did have a large number of flaws. It was a serious mistake to announce the success of the project too early.

The president of Heidelberg University, Bernd Eitel, decided to deprive Sohn of some of his duties: in the following 3 months, Sohn may not conduct research or teaching work, but as the attending doctor, Sohn can continue to provide treatment to patients. At the same time, disciplinary action will be taken against Sohn.

This scandal caused serious “reputation damage” to the medical center in Heidelberg. In response, Andreas Draguhn, Dean of the Medical School of Heidelberg University, and two other senior executives announced their resignation. Draguhn said: “During the early breast cancer blood test incident, the dean’s treatment has become the focus of official investigations and has also triggered some critical discussions. I have decided to take responsibility for this and hope this decision can reduce hospitals and schools. Reputation damage.”

But Sohn didn’t seem to realize his mistake. He prevented the external investigation team from investigating.

In response to this turmoil, the court said that Sohn’s improper behavior has violated the law, and some of his previous remarks were not sufficient to support his presumption of innocence. On October 23, the hospital filed a lawsuit against the incident, and the court will make a ruling on the matter.

Currently, the HeiScreen website is still running, and the research page still exists. In May, a related company issued a statement saying that blood testing only “plays a role” under laboratory conditions, and that it will use this method for further research in areas such as ovarian cancer in the future.

Before the data falsification, Sohn was also caught in a scandal for “stealing the research results of others”.

In fact, the blood screening method for breast cancer was developed by a team led by a Chinese scholar Yang Rongxi.

In 2006, Yang Rongxi went to the Heidelberg University School of Medicine to study. During the school, she developed a technology to screen for breast cancer through blood. However, when applying for a patent, an accident happened. 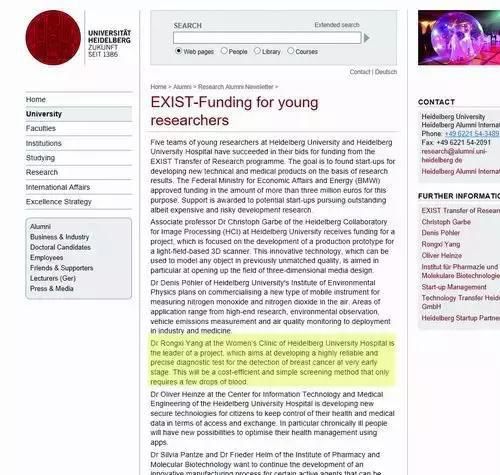 Statement by Yang Rongxi as the research leader

The patent company stated that because Yang Rongxi was still an employee of the Heidelberg University School of Medicine when the patent was invented, according to the German Service Invention Law, the ownership, patent license and authorization of the scientific research results obtained belong to academic institutions, and she only has the right to distribute dividends.

Soon thereafter, the Medical School of Heidelberg University revoked Yang Rongxi’s position as project leader without giving any reasons. Her position was replaced by Sarah Schott (a student of Sohn), and then all members of the “Breast Cancer Blood Screening” project left the project team, and several members even left the medical school.

Although the scandal has been reported by various media including Der Spiegel in Germany, neither Heidelberg University nor Sohn has responded positively. Now, Yang Rongxi has returned to China and teaches at Nanjing Medical University.

Can “drop blood” be tested for cancer?

Can the liquid biopsy technique using blood as a specimen be screened for cancer? At present, the gold standard for cancer diagnosis is still tissue biopsy. Although the liquid biopsy technology of “blood test for cancer” is more convenient and simple, there are still various problems in this technology and it needs to be further improved. Let’s not be discouraged because of this. Some researchers are already contributing silently.

On May 29, Nature published a study on the detection of whole-genome circulating free DNA (cfDNA) fragments to achieve 7 types of cancer liquid biopsy technology. The researchers came from the Kimmel Cancer Center of Johns Hopkins University.

The researchers adopted a method called “DELFI” to study the way the DNA exists in the nucleus by looking at the size and amount of DNA in different regions of the genome in the blood, and then to find the difference between tumor cells and normal cells.

The study included 208 untreated cancer patients and 215 healthy people. Collecting the blood of all subjects, extracting the cfDNA and performing low-coverage whole-genome sequencing, it was found that the distribution of cfDNA fragments of healthy people was consistent, while the distribution of cfDNA fragments of cancer patients changed greatly.

The researchers said that DELFI still needs further improvement, but in the near future, DELFI is expected to be used in the screening and treatment of cancer patients.