The Danish biopharmaceutical company Ascendis Pharma recently announced that the US Food and Drug Administration (FDA) has approved the weekly long-acting growth hormone Skytrofa (lonapegsomatropin-tcgd, TransCon hGH) for the treatment of growth hormone deficiency in children GHD, specifically: pediatric patients aged 1 year and over, weighing at least 11.5 kg, and growth failure due to insufficient secretion of endogenous growth hormone (GH). VISEN Pharmaceuticals has the exclusive license of Skytrofa in Greater China and is currently conducting Phase 3 clinical trials of the product.

Growth hormone deficiency (GHD) is a serious and rare disease characterized by short stature and metabolic complications. In GHD, the pituitary gland cannot produce sufficient growth hormone, which is not only important for height, but also for the child’s overall endocrine health and development.

The approval includes the new Skytrofa® auto-injector and cartridges, which allow families to store medications at room temperature for up to 6 months after being removed from the refrigerator for the first time. By shifting to once-a-week injections, patients who previously injected once a day are expected to reduce the number of injection days per year by 86%.

In terms of new GHD drugs, in September 2020, Novo Nordisk’s once-a-week long-acting growth hormone derivative Sogroya (somapacitan-beco) was approved by the US FDA for the treatment of GHD in adults. Sogroya is the first human growth hormone (hGH) therapy for the treatment of adult GHD that requires only subcutaneous injections once a week, while other FDA-approved hGH preparations must be injected daily.

Sogroya is modified from natural hGH to enhance its binding to the plasma protein albumin (albumin), making it suitable for once-a-week dosing. Currently, Sogroya is also developing a treatment for GHD in children.

Childhood growth hormone deficiency (GHD) is a serious and rare disease caused by insufficient growth hormone secreted by the pituitary gland. Children with GHD are not only short in stature, but also have metabolic abnormalities, psychosocial challenges, cognitive deficits, and poor quality of life. For decades, the standard of care for GHD has been to inject hGH subcutaneously once a day to improve growth and metabolic effects. For caregivers and patients, the treatment burden of daily injections is high, which may lead to poor compliance and reduce the overall treatment effect. 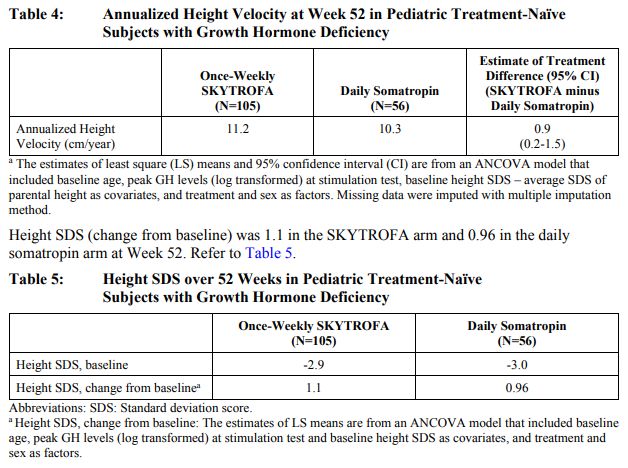 The FDA approved Skytrofa for the treatment of GHD in children, based on the results of the international phase 3 heiGHt study. This is a randomized, open-label, positive drug controlled study in 161 newly-treated children with GHD, comparing Skytrofa once a week with a somatropin product (GenotropinGHD) once a day.

The results showed that the study reached the primary endpoint: at week 52, Skytrofa was not inferior to daily hGH and better than daily hGH in terms of annual growth rate (AHV, unit: cm/year), and had similar safety sex. The specific data is that using the analysis of covariance (ANCOVA) intention-to-treat group, the AHV in the Skytrofa treatment group was 11.2 cm/year, and the daily hGH group was 10.3 cm/year (the difference between the two groups: 0.9 cm/year, 95% CI: 0.2-1.50). 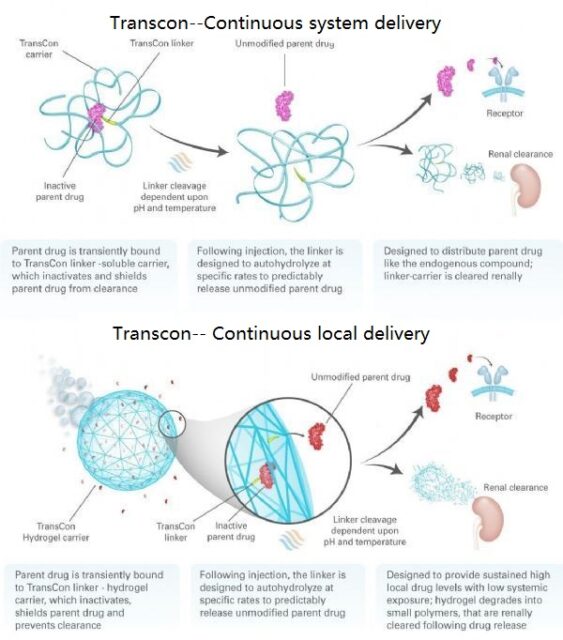 TransCon means “Transient Conjugation”. Ascendis’ proprietary TransCon platform is an innovative technology designed to create new therapies that optimize therapeutic effects, including efficacy, safety, and dosing frequency. The TransCon molecule has three components: an unmodified parent drug, an inert carrier to protect it, and a linker that temporarily connects the two. When connected, the carrier is inactivated and protects the parent drug from being eliminated. When injected into the body, physiological pH and temperature conditions will begin to release the unmodified active parent drug in a predictable release mode. Because the parent drug is unmodified, its original mode of action should remain unchanged. TransCon technology can be widely used in multiple therapeutic areas of proteins, peptides or small molecules, and can be used systemically or locally.