The heart is the energy station of the human body, which is responsible for pumping fresh blood to the whole body. Once the cardiomyocytes are damaged, they cannot be updated in time, which will lead to the stagnation of heart function and seriously affect the safety of life. However, adult cardiomyocytes renew very slowly, and the heart hardly has the ability to repair itself.

After coronary heart disease and heart attack, some of the myocardial cells are damaged, but they cannot produce new cells to renew the damaged myocardial tissue, which eventually leads to heart failure, which is one of the reasons why heart disease is so fatal. Therefore, promoting the regeneration of cardiomyocytes and helping the heart to heal itself have always been the focus of heart research.

Recently, a research team from the Max Planck Institute of Heart and Lung Research in Germany published a research paper titled: Reversible reprogramming of cardiomyocytes to a fetal state drives heart regeneration in mice in Science.

This study proved that the specific expression of Oct4, Sox2, Klf4 and c-Myc (collectively referred to as OSKM) in the heart can induce the dedifferentiation of adult cardiomyocytes, promote their proliferation in the body, and give the heart the ability to regenerate .

iPSC has the ability to differentiate into all cell types. The 2012 Nobel Prize in Physiology or Medicine was awarded to its discoverer, Shinya Yamanaka.

Previous studies have shown that OSKM is generally overexpressed in i4F mice (i4F, inducible four factors), which can lead to cell dedifferentiation, proliferation, and formation of teratomas in various organs. However, teratomas do not form in the heart, thus reflecting the low proliferation rate of CMs. Since OSKM-mediated reprogramming is gradual and random, the authors hypothesized that when OSKM expression time is extended and expression in other cells is avoided, CMs may be induced into a state of proliferation and dedifferentiation.

In order to test this hypothesis, the researchers constructed i4FHeart transgenic mice, which can specifically express OSKM in CMs by taking doxycycline (Dox). After 6 days of continuous administration of DOX, these mice appeared healthy, with normal left ventricular ejection fraction (LVEF) and stroke volume (SVs). However, at this time, cardiac remodeling and CM dedifferentiation have shown early signs, which can be observed from the partial expression of smooth muscle actin (SMA) in CMs.

However, the prolonged expression of OSKM in cardiomyocytes in vivo can cause irreversible changes in the heart, including damage to its function. When OSKM was expressed for 12 days, SMA in CMs was significantly expressed, and LVEF and SVs were significantly reduced. 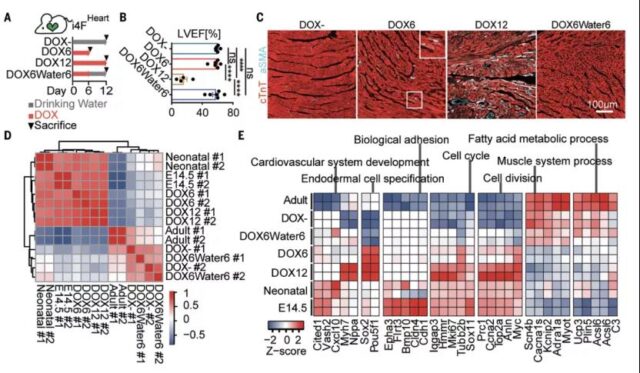 When the cardiomyocytes in the body express OSKM for a long time, the cardiomyocytes will continue to dedifferentiate so that they lose their original characteristics, and even lead to the formation of heart tumors. Experimental results showed that after 21 days of continuous Dox treatment, tumors formed in the myocardium of i4FHeart mice and expressed Nanog, which is believed to play an important role in regulating the proliferation of stem cells. Later, even in the absence of Dox, the induced pluripotent stem cell clones expressing Nanog can maintain growth. 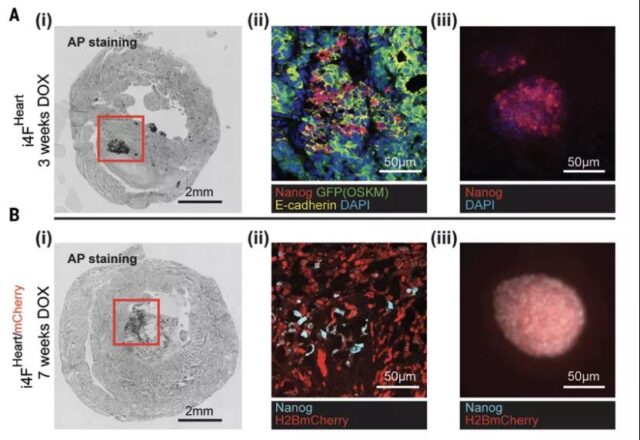 The researchers placed CMs purified from i4FHeart/mcherry and i4FHeart mice in the presence of Dox and cultured them, re-entering the cell cycle and dividing completely. Although fully mature CMs are relatively resistant to OSKM treatment and cannot form iPSCs in culture, after 12 days of treatment of i4F mouse hearts with DOX, the number of CMs in the myocardium increased significantly.

Experimental data shows that OSKM depends on the programming and dedifferentiation of CMs is determined by its developmental stage: in neonatal CMs, OSKM expression maintains an immature and proliferative state; in immature CMs, it prevents cell maturation and mitotic exit ; In fully differentiated adult CMs, allowing cells to acquire mitotic ability. 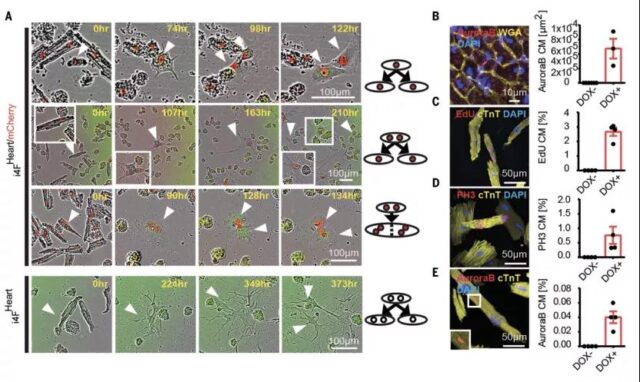 The transient expression of OSKM in CMs can stimulate cell proliferation without losing its properties, so the author wonders if this can also promote heart repair. Experimental results show that short-term OSKM expression can repair the broken heart apex of i4FHeart/mcherry mice, and the smallest fibrotic scar appears. After that, CMs usually stop proliferating and the heart regeneration ability is completely lost.

The ratio of EdU-positive cells increased significantly in CM cells throughout the heart, especially near the initial injury site, indicating that changes in the microenvironment after injury promoted the partial reprogramming of CM into the cell cycle. These data indicate that transient OSKM expression prolongs the regeneration window of the heart of young mice.

Experiments have shown that the transient expression of OSKM in adult CMs can repair partially damaged adult hearts through the proliferation of CMs.

In summary, the study shows that the transient specific expression of the four transcription factors of OSKM in CMs can induce dedifferentiation of cardiomyocytes, promote their proliferation in vivo, and endow the heart with the ability to regenerate, and it can be used in mouse myocardial infarction models. It was verified.

However, similar to the problems faced by most regenerative experimental studies, the increase in cell proliferation is accompanied by an increase in the risk of cancer, and the overexpression of OSKM can also lead to the formation of heart tumors. Therefore, the research is still a long way from clinical application, but it is undeniable that it provides a new research perspective and treatment direction for heart regeneration.