modRNA technology: A new method of protein expression.  As early as the 1990s, injection of naked messenger ribonucleic acid (mRNA) has been able to achieve the expression of exogenous proteins in the body.

However, the instability and high immunogenicity of mRNA hinders the further development and application of this technology.

In recent years, with the deepening of the understanding of mRNA structure and the advancement of nucleic acid technology, it is possible to chemically synthesize and modify messenger ribonucleic acid, namely Chemicallysyntheticmodified messageRNA (modRNA).

Chemically synthesized modified messenger ribonucleic acid (modRNA) refers to the use of chemically modified bases to synthesize mRNA in vitro, which is a new type of gene carrier.

This technology uses different modified bases as raw materials, transcribes DNA fragments containing mRNA biological information in vitro to synthesize modRNA, and then transfers them into target cells through media such as liposomes or nanoparticles for protein translation and expression, so as to realize the body The target protein with biological activity can be expressed quickly, efficiently and pulsed internally and externally to achieve the purpose of treating diseases.

In 2010, the experimental team of Luigi Warren, a postdoctoral fellow at Harvard University, pioneered in vitro synthesis of 5mC/ψ-modRNA expressing the four transcription factors Oct4/Sox2/c-Myc/Klf4, and introduced them into a variety of human cells [1 ], and finally induce the production of iPSCs with all-round potential, which provides a new, safe and reliable method for reprogramming and directed differentiation research.

In 2016, Luni et al. [2] used an automated microfluidic system to further optimize the microenvironment for somatic cell reprogramming, and enhance the autocrine and paracrine effects of the cells themselves and between cells. It can produce high-purity, high-purity, and paracrine effects within 2 weeks. IPSCs with good uniformity, with the advantages of low cost and remote control, have laid the foundation for the better application of this technology in basic research and disease treatment. It is worth noting that compared with retroviruses, iPSCs induced by modRNA are closer to ESCs at the transcription level.

modRNA can effectively regulate the differentiation and proliferation of target cells, and promote the recovery of tissue or organ structure and function after injury, so it can be used as an effective treatment for tissue repair and regeneration, especially in myocardial regeneration and bone repair.

In 2013, Lui et al. [3-4] took the lead in using modRNA encoding VEGF to promote the differentiation of cardiac progenitor cells into vascular endothelial cells, thereby contributing to the proliferation and survival of cardiomyocytes. Compared with DNA plasmids, it can reduce the scope of myocardial infarction. , Improve blood supply and speed up the recovery of heart function better, so it has good clinical application value. 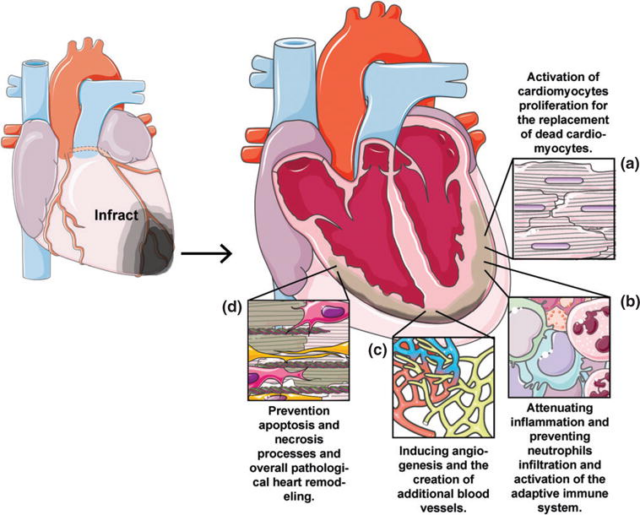 Cytokines such as Bone Morphogenetic Proteins (BMPs) play an important role in regulating bone growth and development and promoting bone repair and regeneration.

As an efficient and safe gene replacement technology, modRNA has gradually been recognized for its potential application value in this field. In recent years, it has been reported in many literatures that modBMP-2 and modBMP-9 combined with nanocarriers can effectively repair bone defects. There is a huge clinical transformation prospect in regeneration [6-7].

So far, various gene vectors have achieved remarkable results in the field of replacement therapy for gene defect diseases and overexpression of target protein. In an in vitro study, Wang et al. [8] used patient-derived iPSCs to construct a tissue-engineered heart patch, and knocked down or knocked out the Tafazzin gene (TAZ) by shRNA and crispr/cas9 gene editing techniques to construct Barth syndrome (Barth syndrome). , BTHS) disease model, and finally use modRNA technology to overexpress TAZ to reverse the disease process, so as to explore the pathophysiological process of disease occurrence and development, and provide a basis for clinical drug screening. In vivo treatment, pulmonary surfactant protein-B (surfactant protein B, SP-B) deficiency is a fatal lung disease caused by insufficient SP-B production by the body’s alveolar type II epithelial cells.

In 2011, Kormann et al. [9] made SPB-deficient mouse models inhaled modSP-B and found that it can effectively compensate for the lack of SP-B in mice, improve the adverse symptoms of the respiratory system, and significantly increase the survival rate.

In addition, modEPO (Erythropoietin) is another representative achievement of gene therapy. Many studies have shown that compared with unmodified mRNA, modRNA can significantly improve the stability of mRNA and inhibit the activation of the body’s immune response. , And then achieve a higher level of EPO expression for a longer time, so as to more effectively increase the level of red blood cells in the blood [10-11].

In 2017, both Nature and Cell published reports on the application of modRNA vaccines against zika virus. After modRNA encodes the signal peptide, the premembrane protein and envelope protein of zika virus, it can self-assemble into immunogenic and non-immunogenic vaccines in the host. Infectious virus-like particles, which activate the immune system to produce a specific immune response, and ultimately achieve the purpose of protecting mice and even primates from zika virus infection and damage for a long time [12-13].

In addition, with the rise of tumor vaccine research, the role of modRNA vaccine in tumor immunotherapy has gradually attracted people’s attention. Scientists have used modRNA to encode multiple new epitopes with individualized mutations or bispecific T cells to induce antibodies. , Successfully recruited and activated the specific immune response mediated by T lymphocytes [14], so as to achieve the purpose of inhibiting or even eliminating tumors. modRNA tumor vaccine can not only realize the individualization of tumor treatment, but also enhance the anti-tumor efficacy through repeated injections and continuous expression. It may be an emerging strategy for tumor immunotherapy.