Baby has become the biggest victim? The latest study: the concentration of microplastics in infant feces is higher than that in adults.

Nowadays, microplastic pollution has become the focus of global attention on the environment and health. More and more studies have found that microplastic particles with a particle size of less than 5 mm can be described as ubiquitous in people’s daily lives: from the depths of the ocean to Everest At the peak, from tap water from home taps to fish and other seafood foods, these non-degradable microplastics have quietly entered the ecosystem from the environment and entered the human body through the layers of the food chain.

At the American Chemical Society‘s Fall 2020 online conference, a study analyzed 47 human tissue samples by mass spectrometry and found that these samples contained microplastics or nanoplastics. Although the harm of microplastics to human health is still unclear, it is worrying that there is constant evidence that this “invisible pollution” hand has reached the baby.

In December 2020, researchers from Italy discovered microplastics in human placenta for the first time. They found microplastics in maternal, fetal and amniotic membranes, and found that the substances carried by these microplastics could interfere with the human endocrine system. , And may cause long-term effects on human health. But so far, the exposure of microplastics in infants and adults has not been quantitatively analyzed.

Recently, the team of Professor Lei Wang from the Key Laboratory of Environmental Processes and Benchmarks of the Ministry of Education of the School of Environmental Science and Engineering of Nankai University and Professor Kurunthachalam Kannan of the Department of Pediatrics and Environmental Medicine of New York University School of Medicine and others found in a small pilot study that PET microplastics The content in infant feces is higher than that in adults.

Microplastics refer to plastic fragments and particles with a diameter of less than 5mm. According to the source, they can be divided into primary microplastics and secondary microplastics. The former is a variety of man-made industrial plastic products, such as particles in toothpaste, hair spray, cleansing milk and air fresheners. These microplastics can enter the surrounding environment through the discharge of domestic sewage; the latter consists of various plastic wastes through physical, chemical and Broken by biological effects.

Studies have continuously confirmed that microplastics not only exist in the ocean, mountains and other environments, but also enter the human intestines and stomach with food. In 2018, at the European Society of Gastroenterology, researchers reported that as many as 9 microplastics were detected in human feces for the first time, and their diameters were between 50 and 500 microns. Among them, the most common particles are polypropylene (PP) and polyethylene terephthalate (PET), which are the main components of plastic bottles and bottle caps.

For a long time, people believed that plastics are inert. After ingested in the body, they pass through the gastrointestinal tract and are excreted through bile. However, recent studies have shown that microplastic particles smaller than 10 microns in size can pass through cell membranes and enter the human circulatory system. 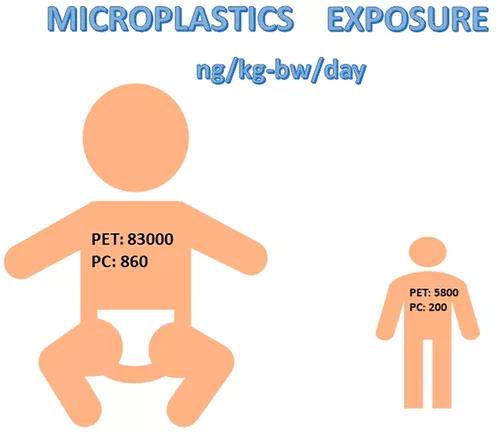 Although it is known that humans will be exposed to microplastics, existing studies do not yet understand the extent of exposure. The presence of microplastics in the human placenta further emphasizes the potential intergenerational effects of these non-degradable chemicals on the human body, and they may affect the developing fetus.

Ethylene phthalate (PET) and polycarbonate (PC) microplastics are mainly used in the production of textile fibers, water bottles and mobile phone cases. Researchers hope to measure the content of PET and PC microplastics in infant and adult feces. Evaluate the human body’s exposure dose to these two types of microplastics.

Figure | The concentration (dry weight) of polyethylene terephthalate (PET) and polycarbonate (PC) microplastics in the stools of 6 babies and 10 adults. (Source: ACS)

Researchers attribute the source of microplastics ingested by adults and infants to diet, and the high concentration of microplastics in the feces of one-year-old infants can be attributed to the extensive use of plastic products, such as baby bottles, straw cups, tableware, and plastic teethers And toys.

In addition, textiles and floor stalls are also a major source of PET microplastics. Infants who often chew and suck on fabrics and crawl on carpets may also ingest microplastics.

The few existing studies show that humans have a wide range of exposures to microplastics, but there are gaps in quantitative research on exposure.

The study pointed out that due to the limited sample size, it is impossible to further infer the comprehensive factors that may affect the exposure of microplastics, and the experimental samples may also be contaminated by the collection environment, which may also have an impact on the research results.

Although biomonitoring research can provide a comprehensive assessment of microplastics exposure, such research is still in its infancy. The researchers pointed out that the results of the study provide baseline evidence for the exposure of infants and adults to microplastics, and that these findings can be confirmed and expanded with a larger sample size in the future.