The proof of principle of non-Hodgkin’s lymphoma

Blinatumomab is a first-class BiTE targeting CD19 and has been used to treat B-cell malignancies. The clinical trial of blinatumomab started with three phase I trials involving R/RB cell NHL patients (Table 2), who used 0.75-13μg/m2 up to 3 times a week within 2-4 hours.

These trials were terminated early due to severe cytokine release syndrome (CRS), neurotoxicity, and lack of efficacy. Pharmacokinetic analysis showed that the half-life of blinatumomab in serum is very short, 2-3 hours.

Therefore, the administration method is changed to long-term continuous intravenous infusion to achieve a stable serum level in a longer period of time, which will eventually lead to a prolonged T cell activation time, thereby improving the anti-tumor efficacy and reducing adverse reactions. 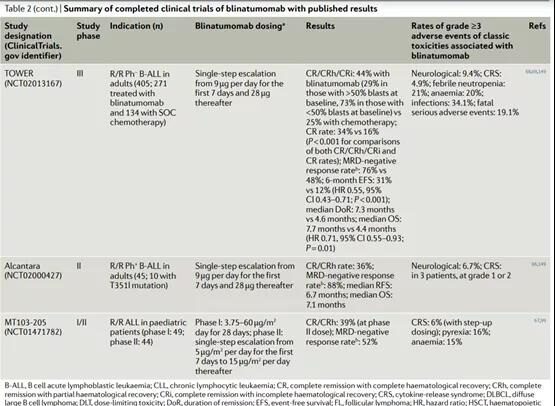 In a subsequent phase I trial of R/R B-cell NHL patients, Bonatumumab was administered by continuous intravenous infusion for 4 or 8 weeks, with a dose range of 0.5-90 μg/m2 per day.

Pharmacokinetic analysis showed stable blinatumomab serum levels and dose linearity during treatment, and T cell activation and B cell depletion in peripheral blood were evident at doses as low as 5-15 μg/m2/day.

Most neurological AEs occur after the start of treatment Within the first 3 days, and fully reversible when treatment is discontinued. Other clinically relevant AEs include flu-like symptoms and mild CRS without dose-limiting manifestations.

The clinical data of this trial was first published in 2008 (Ref. 44), and the final results were published in 2016. The results demonstrated a dose-dependent efficacy with an objective response rate (ORR) of MTD56 of 69% (Table 2).

Although depletion of B cells in peripheral blood and bone marrow was observed at a daily dose of 15 μg/m2 of blinatumomab, the regression of lymph node tumor masses required higher doses.

It is worth noting that objective responses include complete remission (CR), which is observed in all NHL subtypes examined, including aggressive DLBCL subtypes (MTD has an ORR of 55% and a CR rate of 36%).

The efficacy of Blinatumomab in hospitalized patients with R/R DLBCL was confirmed in a phase II trial (ORR 53%; CR rate 19%).

The long-term follow-up analysis of the phase I trial of continuous intravenous Bonatumumab showed that among the responders, the overall survival rate (OS) for 8-10 years was >50%; the progression-free and treatment-free survival rates were both about 40 %.

Therefore, blinatumomab seems to have curative potential for R/R B-cell NHL patients; however, for long-term clinical benefit, at least 60 μg/m2 per day is required.

The observation that low doses of blinatumomab may be sufficient to eliminate target cells in peripheral blood and bone marrow led to testing of the drug at dose levels of 5–15 μg/m2 in a series of phase II trials involving the smallest (or measurable) Residual disease-positive (MRD+) B-ALL, R/R Philadelphia chromosome adults, after failure of treatment based on tyrosine kinase inhibitors, negative (Ph-) B-ALL or R/R Ph+ B-ALL, and suffering from Pediatric patients of B-ALL.

Clinically relevant AEs are similar to those previously observed in NHL patient trials, including CRS and neurotoxicity. In these trials, the hematological CR rate of Blinatumomab in R/R ALL patients was between 30% and 69% (Table 2); long-term remission was observed in patients with low tumor burden, while bone marrow blasts were observed at baseline >50% of high tumor burden is associated with unfavorable results.

The results of the Phase III TOWER trial in R/R Ph-ALL adult patients showed that the use of blinatumomab has significantly superior OS, event-free survival, and better quality of life compared with standard care (SOC) chemotherapy. 68 ,69 (Table 2).

At the same time, in the treatment group, 24% of patients subsequently received allogeneic hematopoietic stem cell transplantation (allo-HSCT), and there is no evidence that there is a difference in the level of OS benefit from allo HSCT between patients receiving blinatum omab and receiving SOC chemotherapy Of patients.

In fact, allo-HSCT was not statistically related to the OS benefit of patients who achieved CR with blinatumomab (OR 1.17, 95% CI 0.54–2.53). Therefore, regardless of the allo-HSCT in the study, the increase in OS is mainly driven by the response to blinatum omab.

However, data from the TOWER study indicate that blinatum omab may be a better transplant bridge than chemotherapy for patients with advanced disease who need a second or later salvage treatment.

In 2017, based on OS data from the TOWER study, the accelerated approval of blinatumomab for the treatment of R/R Ph-B-ALL patients was converted to full approval. Therefore, R/R Ph-B-ALL is the first and currently the only malignant tumor for which BiTE therapy is fully approved.

In 2019, two phase III trials (NCT02392859 and NCT02101853) evaluated the efficacy of blinatumomab and SOC chemotherapy in pediatric patients with B-ALL relapse for the first time, due to convincing evidence that the blinatumomab cohort has a therapeutic benefit; it is expected that these trials The data will cause the accelerated approval of blinatumomab in this case to turn into a full approval. 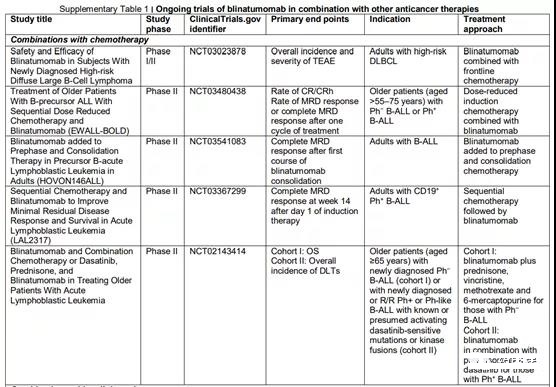 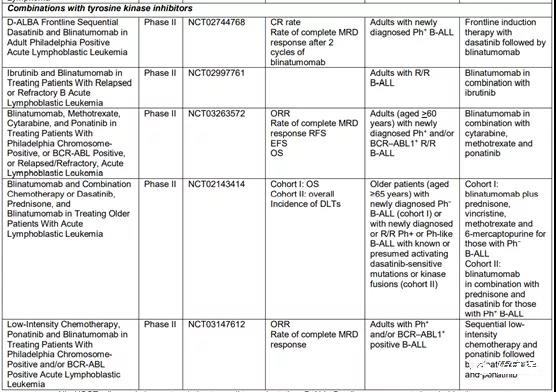 In B-ALL patients who have achieved hematological CR based on conventional morphological response criteria after induction chemotherapy, persistent or recurrent MRD detected by highly sensitive molecular tests (such as PCR or flow cytometry) is the strongest negative prognostic marker And predict clinical recurrence.

Even in patients receiving allo-HSCT, MRD is still an unfavorable prognostic factor.

The European ALL study group is the first group to establish prospective MRD monitoring in a pilot trial to evaluate blinatumomab in patients with persistent or relapsed MRD after first-line B-ALL chemotherapy.

The efficacy of blinatumomab in the MRD setting was confirmed in a larger cohort of the European multicenter BLAST trial involving 116 patients: RFS at 18 months was 54%; median OS duration was 36.5 months and 38.9 months Complete MRD responders were compared with non-responders at 12.5 months.

In fact, the results of the two MRD trials showed that compared with patients who did not achieve MRD, patients who achieved MRD negative had improved long-term leukemia-free survival and OS (Table 2).

In summary, the entire series of trials conducted in B-ALL patients provided clear evidence that patients who received Bonatumumab after significant hematological recurrence had much worse results than those who received MRD (Table 2) .

In addition to tumor burden, the number of previous cytotoxic chemotherapy treatments seems to be negatively correlated with patient outcomes after bli natumomab treatment, as evidenced by data from patients treated with first CR and late CR in the BLAST trial (median RFS 24.6 months vs 11.0 Months) and the TOWER trial (median OS 11.1 months vs. 5.1 months).

Therefore, B-ALL patients seem to benefit from the long-term benefit when receiving Bonatumumab in the low tumor burden stage of the first hematological CR (ie, MRD) after induction therapy.

It is worth noting that the ongoing phase III trial is evaluating the use of blinatumomab instead of consolidation chemotherapy in the first-line treatment of R/R B-ALL patients (NCT02003222).

According to data from the BLAST trial, both the FDA and EMA have approved blinatumomab for the treatment of MRD in adults and children with B-ALL (in 2018 and 2019, respectively).

Prognostic factors associated with adverse outcomes); therefore, the development of targeted treatment strategies to eradicate persistent MRD through BiTE or other immunotherapy is a promising method to improve the survival rate of a series of malignant tumors.

In addition to MRD-guided methods, integrating immunotherapy into the first-line treatment of cancer can reduce the incidence of disease recurrence and the burden of genotoxic chemotherapy, so it is possible to significantly improve the overall outcome of many cancers other than B-ALL. .

New technologies for detecting circulating tumor DNA using next-generation sequencing technologies are currently being developed for many cancer entities in order to detect diseases early before clinical manifestations or recurrence, and may facilitate such methods.