The forward-looking molecular characteristics of cancer enable doctors to determine the genomic changes of each patient’s tumor in real time, and to choose personalized treatment plans based on these detailed data.

Although only a few patients currently benefit from precision targeted therapy, as the field progresses, this group will continue to grow.

The scope of precision oncology is rapidly expanding to address previously insurmountable targets and rare genomic drivers.  At the same time, previously unrecognized biological and therapeutic complexities are emerging.

How to further expand the benefits of genome-driven oncology, including proposing strategies to improve drug design, more detailed patient selection, and designing the next generation of genome-driven clinical trials, will help accelerate our understanding of tumor biology and continue to improve The patient’s prognosis.

At present, a new generation of therapies based on precision oncology helps to clarify many key characteristics of the best molecularly targeted drugs. The most important factors include therapeutic index, target selectivity and drug resistance.

A good treatment window to allow the optimal dose is the key to successful treatment. The therapeutic index is the result of comprehensive consideration of drug selectivity, target characteristics and off-target toxicity.

For example, the therapeutic window of EGFR inhibitors is different due to the different selectivity of targeted activating mutations and wild-type EGFR. Many patients who respond well to first- and second-generation EGFR inhibitors (such as erlotinib, gefitinib, and afatinib) have L858R mutations and exon 19 deletions. These deletions increase receptor dimerization and reduce ATP binding. Compared with EGFR, the affinity of inhibitors is enhanced.

In contrast, these drugs have a poor therapeutic index in EGFR exon 20 insertion, because the inhibitory effect of exon 20 mutants is not as good as that of wild-type EGFR, which limits the tolerance of these drugs. 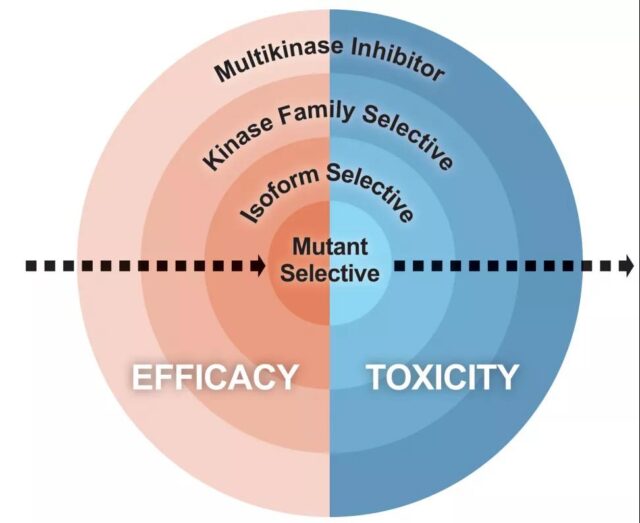 For example, changes in activated RET are found in about 2% of lung adenocarcinomas and up to 20% of papillary thyroid carcinomas, and multiple kinase inhibitors (MKI) have a certain degree of RET inhibition, such as lenvatinib, vandetanib, cabozatinib, and ponatinib. Shows limited clinical activity in RET-mutated tumors. However, all of these drugs show stronger non-targeted inhibitory effects, typically VEGFR (KDR), which determines their dose-limiting toxicity and thus cannot achieve the maximum RET blockade.

In contrast, selective RET inhibitors, including selpercatinib (LOXO-292) and pralsetinib (BLU-667), have been developed to allow effective and sustained targeted inhibition, and have proven to have significant efficacy and good results compared with MKIs Security.

Therefore, a better understanding of the genomic drivers of a single cancer, coupled with advances in structural biology, enables the development of reasonable and suitable drugs for specific purposes. The production of such selective inhibitors is essential for optimizing tolerance and maximizing The effect of chemical treatment is very important.

When designing drugs, the underlying mechanisms of primary and acquired resistance should be considered. Considerations include resistance caused by drug permeability and resistance secondary to molecular changes.

For common cancers with brain metastases, including NSCLC, breast cancer, and melanoma, ensuring that drugs that target key genomic changes in these cancers have sufficient central nervous system (CNS) permeability has become a key design parameter.

Although the first-generation ALK inhibitor crizotinib can achieve high initial systemic disease control rates, poor brain permeability leads to CNS progression in up to 60% of patients during treatment.

A prospective evaluation of a new generation of ALK inhibitors has shown that disease control in the brain is significantly improved, which ultimately helps to improve progression-free survival and overall survival. 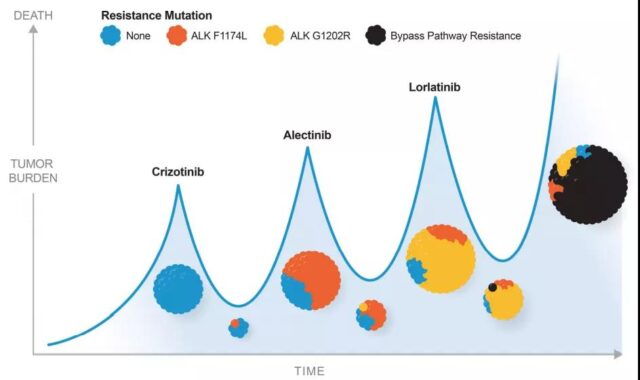 Recognizing that more selective treatments tend to have better efficacy and tolerability, some strategies have been used to more specifically and directly suppress carcinogenic drivers, including the development of selective inhibitors of isoforms and mutations. 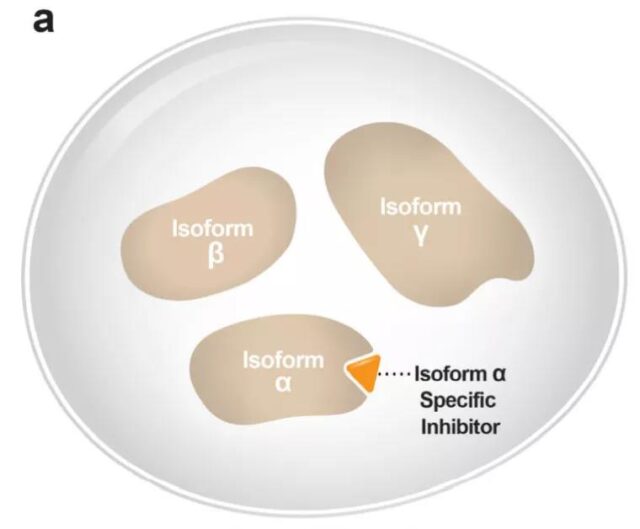 For example, the PI3K pathway is one of the most common mutation pathways in cancer, but the early use of pan-PI3K inhibitors has only shown limited efficacy. In contrast, subtype-selective PI3K inhibitors show better efficacy than pan-PI3K and dual PI3K/mTOR inhibitors. In addition, isoform-specific inhibitors can minimize the toxicity attributed to “off-target” isoforms.

KRAS is one of the most common mutated oncogenes in cancer, but although it is considered a key carcinogenic driver, it has long been considered unmedicable, partly because of the lack of targetable binding sites. However, the latest design allows it to react with the mutant cysteine ​​of KRAS G12C, forming an irreversible binding and locking the protein in its inactive binding state. In the absence of this mutant cysteine, these covalent inhibitors will not react with wild-type KRAS, thereby protecting normal tissues. The early results of the KRAS G12C inhibitor phase I trial proved the effectiveness and safety of this targeted mutation.

Another way to improve the therapeutic index is to use antibody-conjugated drugs. By directly linking the cytotoxic payload to the targeting antibody, ADC is designed to expand the therapeutic window of traditional cytotoxic drugs. 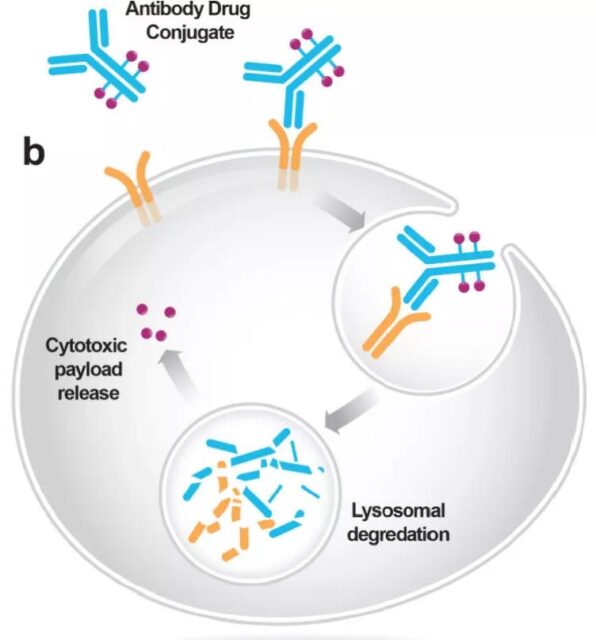 At present, many such drugs have begun to be used clinically. For example, the ADC drug trastuzumab deruxtecan (DS8201) is composed of the cytotoxic topoisomerase I inhibitor deruxtecan coupled to the anti-HER2 antibody trastuzumab.

This drug has shown unprecedented activity in HER2-driven cancers, including HER2+ breast cancer and gastric cancer, as well as breast cancer with low HER2 expression. In this type of patients, HER2 targeted therapy is effective It is often ineffective to a large extent.

Identifying tumor-specific targets suitable for ADC development and optimizing the safety of these engineered drugs will be the key to their further development and utilization.

These allosteric inhibitors can overcome target drug resistance mediated by mutations in the active site of the validated target, and can inhibit previously untreatable proteins.

For example, asciminib (ABL001), an allosteric inhibitor targeting BCR-ABL fusion positive, has entered the clinic and has proven efficacy in refractory drug-resistant AML patients who have been treated with a variety of ATP-competitive inhibitors.

Another method being actively explored is the combined application of selective ATP competitive inhibitors and allosteric inhibitors, which may jointly delay or even completely prevent the development of acquired drug resistance.

Allosteric inhibitors can also target treatments that were previously untargetable. For example, phosphatase SHP2 and SOS1 together play an important role in facilitating nucleotide exchange, allowing RAS to cycle between its inactive GDP-bound state and activated GTP-bound state.

Phosphatase was previously considered to be an unattractive drug target, but allosteric inhibitors can change the conformation of SHP2 and eliminate its activity. This has proven efficacy in preclinical animal models. Currently, some clinical trials are underway .

Another emerging method to target key cancer drivers is PROTACS. This method usually uses bifunctional molecules to bring the target protein close to the ubiquitin ligase, which ultimately leads to the degradation of the target protein. 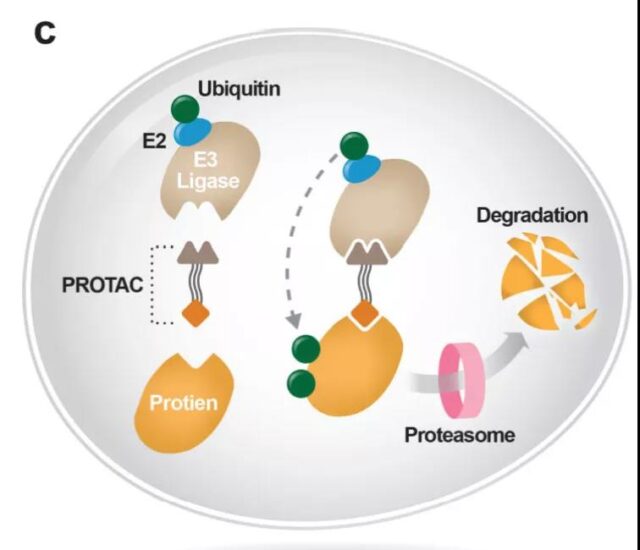 The application of this technology in cancer treatment is still in its infancy. Like allosteric inhibitors of key oncogenes, this technology may overcome target drug resistance mediated by mutations in the active site of the validated target. Inhibits previously unmedicable proteins.

Many key drivers of cancer, including transcription factors, cannot be targeted by currently available treatments, either because they are not expressed on the cell surface and therefore inaccessible to antibodies, or because they lack a binding capsule to which small molecule inhibitors can attach .

ARV-110 is the first drug to enter phase I clinical trials, which links the E3 ubiquitin ligase and androgen receptor in patients with prostate cancer (NCT03888612). This new method of reducing cellular protein levels can effectively target many previously untreatable targets.

By shaping the protein conformation to restore the natural function of the mutant protein, thereby reactivating the lost activity, such small molecule drugs are currently being developed. 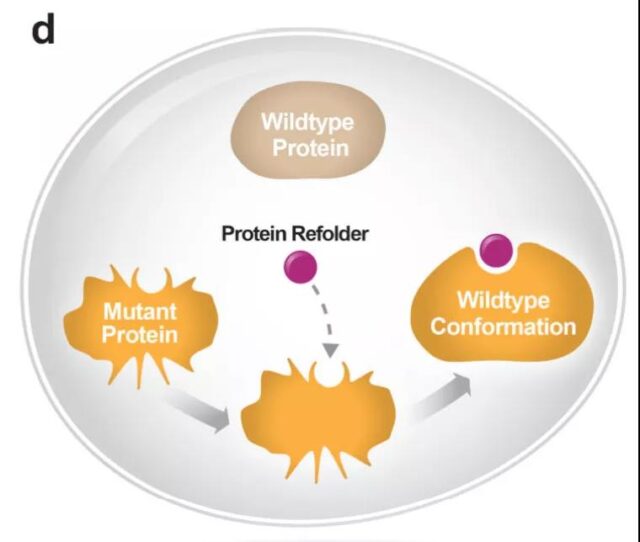 This strategy has been proven successful in the treatment of cystic fibrosis. Cystic fibrosis is a non-tumor hereditary disease characterized by mutations in the gene encoding cystic fibrosis transmembrane conductance regulator (CFTR).

However, there is currently no specific treatment for TP53 mutant cancers, and small molecules that restore the activity of mutant TP53 through protein renaturation are under development. In addition to expanding the number of possible drug targets, this approach also provides additional benefits, such as reduced toxicity.

Optimize the use of drugs

In order to maximize the advantages of genome-driven oncology, the use of existing therapies must be optimized. Reasonable treatment sequence and development of a synergistic and tolerable combination, and giving new treatments at the most appropriate time during the treatment process may improve the efficacy.

Apply as soon as possible to reduce resistance

New treatments are usually tested on patients with diseases that benefit the most from existing standard treatments. However, the experience of using EGFR and ALK inhibitors shows that applying our best drugs as early as possible before resistance emerges may improve efficacy.

More than 50% of EGFR-mutant NSCLC patients treated with first-generation and second-generation EGFR tyrosine kinase inhibitors (TKIs) acquired EGFR T790M mutations. Osimertinib was developed to overcome the T790M mutation and was initially performed in patients who had advanced TKIs.

In patients with HER2-positive breast cancer, the addition of HER2 monoclonal antibody trastuzumab to chemotherapy can significantly improve the 10-year survival rate.

The benefit of disease-free survival has been demonstrated based on the phase 3 trial.

For targeted therapies with high response rates, neoadjuvant therapy can be used to convert unresectable tumors into surgically resectable diseases, thereby providing a chance of cure.

For example, although larotrectinib was developed for advanced TRK fusion-positive cancers that do not respond to standard treatments, neoadjuvant larotrectinib has been successfully used in pediatric sarcoma patients to shrink tumors and allow complete resection.

Although further research is needed to determine the application of this new adjuvant method, it is clear that early use of effective drugs may significantly improve the prognosis of some patients.

Combination therapy can be used to improve efficacy, reduce toxicity, and/or prevent the emergence of drug resistance. In BRAF V600 mutant melanoma, compared with BRAF alone inhibition, combined inhibition of BRAF and MEK can prolong survival and reduce skin toxicity.

When the acquired change itself is targeted, the sequencing data provides an opportunity for a reasonable combination of treatments for both the main and acquired driving factors.

For example, in the TATTON clinical trial, patients with acquired MET-amplified EGFR-mutant NSCLC were treated with osimertinib and the MET inhibitor savolitinib. Savolitinib can restore sensitivity to osimertinib.

The analysis of the molecular characteristics of tumors has enabled us to develop successful targeted therapies, benefiting countless patients.

However, molecular-directed research also emphasizes the complexity of predicting which patients may respond to treatment.

In addition, many genomic drivers are still “not druggable” or cannot be effectively targeted due to the tolerance of current treatments.