Who is the critically ill patient in Israel?

When it comes to the COVID-19 vaccine, Israel is often mentioned.

At the beginning of this year, because of the fast vaccination in Israel, it was used as a model for vaccines to contain the epidemic. But with the spread of Delta in Israel, it has become an example of the vaccine’s declining effectiveness over time or by mutations.

Now Israel is the first country to start large-scale booster shots, and it has become a key example for all parties to debate whether or not an booster shots is necessary.

Especially in the recent discussions about booster shots, some people say that two shots of the vaccine are now completely useless.

These statements often point to Israel. A very important reason for the United States’ proposal for enhanced injections is that Israel has seen a decline in the ability of vaccines to protect severely ill.

In this case, it is worthwhile to see who the critically ill patient in Israel is. These two days happened to see an article from the Israeli Haaretz newspaper, detailing the data of some local severely ill patients.

Haaretz, a newspaper that was briefly checked, is the oldest paper-based news in Israel. It has two editions in Hebrew and English. It is one of the most influential and widely respected Israeli media. Why did you check this source? Because you can see various news reports or comments on the Internet, some so-called news reports may be just under the banner of news reports, and the content is not reliable. Although the traditional news media may make mistakes, after all, the reliability of the information provided by the formal media is more guaranteed. At least many times they will do some basic factual investigations. Sometimes I see a report from a certain country, a country we don’t know much about. If the content is very outrageous, then it is recommended to find out what the source of this report is and whether it is a reliable local media.

The headline of this report is that the 10% of Israelis who have not been vaccinated account for 73% of severe cases and 65% of deaths, leading to the current COVID-19 crisis (Unvaxxed 10% of Israelis Are 73% of Serious Cases, 65% of Deaths). To put it very bluntly.

On September 28 alone, 57 new cases of severe illnesses were reported in Israel. Among them, 63%, or the majority, were not vaccinated. 12 cases received two injections, and 9 cases received the third injection.

It can be seen that although the proportion of people who have not been vaccinated is very low in the population, they account for a very high proportion of severe cases.

If you look at the current total number of severe cases, there are 644 cases, of which 472 cases, or 73%, were not vaccinated, 123 cases received two injections, and 49 cases received the third injection.

According to the announcement of the Israeli Ministry of Health, only one of all critically ill patients in Israel is under the age of 20. Adults who have not been vaccinated, although a minority group, have caused most severe illnesses.

The most severe patients with the COVID-19 will need to use an instrument called ECMO, commonly known as an artificial lung, which is used to replace the patient’s own organs and play a cardiopulmonary function.

There are 47 patients in Israel who are on ECMO, 43 are not vaccinated, only two are vaccinated with two shots, and the third shot is not on ECMO. Don’t underestimate the numbers of these dozens of cases.

ECMO is a very complex instrument that requires a lot of manpower support. There are 47 cases of COVID-19 that require ECMO, which puts great pressure on Israel’s entire medical system.

These people who have not been vaccinated on ECMO, many of them are still relatively young, which could have been completely avoided.

Looking at the total, it can be seen that Israel’s biggest challenge comes from the minority of the population who have not been vaccinated. This is from the overall perspective of the epidemic. If you switch to a ratio, you can see the impact of whether or not vaccinated has on your personal risk.

Nowadays, many people see the data from Israel. The focus is on the three stitches being more effective than the two stitches, but the third stitch is based on a very short tracking time and the amount of data is also limited.

Rather than say how effective the third stitch is, it is better to look at the first two stitches still providing a huge change.

And we must see that a certain percentage of people in Israel have not been vaccinated. This percentage is a minority in the population, but such a minority can still have a huge impact on the entire epidemic because of the large number of severely ill patients. The reference significance in this respect is not less than that of the third shot.

What causes such a proportion of the population in Israel to insist on not being vaccinated? There are various reasons for vaccine hesitation, such as false information on the Internet and so on. But the fake news on the Internet can be encountered by anyone, and no country is immune.

Comparing the vaccination rates in developed countries that also have no shortage of vaccines, it is not difficult to find that they are “different from day to day”. 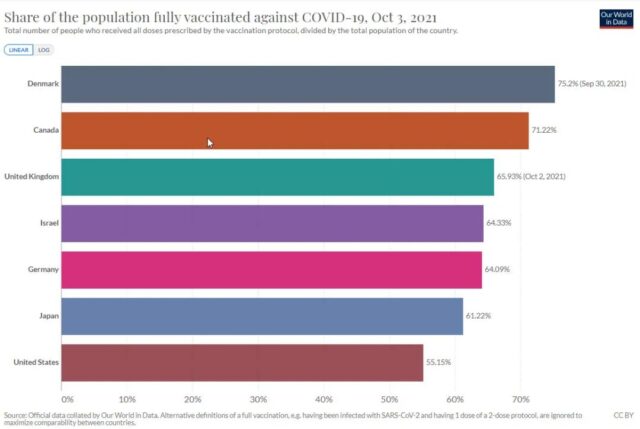 Even if some developed countries, the proportions of all vaccinated populations in Canada and the United Kingdom are 71% and 65%, respectively, while only 55% in the United States. Isn’t it true that fake information is divided into American English and British English? One factor that must be referred to is the long-term social equity issue between the country and society.

The vaccination rate in a country is not evenly distributed and varies greatly among different groups of people. There is a population in Israel that has a very low vaccination rate, that is, its minority ethnic group-Arabs. The United States is similar.

African Americans and Hispanics, as the main ethnic minorities in the United States, have a much lower vaccination rate than other ethnic groups.

If you look at the situation of the two countries, you will find that a big problem is the long-term unfair distribution of social resources. This injustice is all-round, including medical resources.

This has caused some ethnic minorities to completely lose trust in the entire medical system under the long-term lack of fair allocation of medical resources. The vaccination rate will naturally also be negatively affected.

If our own interests are not directly affected, many times we are easy to turn a blind eye to social justice issues, and maybe we still feel complacent when we think it’s good for ourselves.

It can be regarded as a kind of exquisite egoism in disguise. But under the epidemic, we can easily see the consequences of social justice issues.

Even if we are willing to continue to pretend to be blind, we will taste the evil consequences of long-term social justice issues.