Governor of Texas: No company can force employees to be COVID-19 vaccinated

According to a statement issued on the official website of the State of Texas (NBC) on the 11th, Governor Greg Abbott of Texas issued an executive order on the 11th to prohibit any entity company, including private companies, from implementing the COVID-19 vaccination requirement on employees or customers. 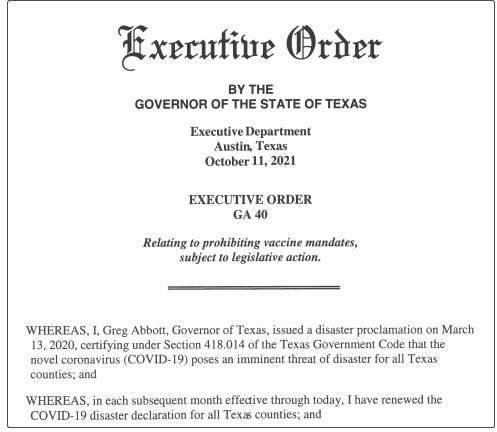 Abbott said on Twitter on the 12th: “I believe that vaccines are safe, effective, and our best way to fight the virus. But we should always keep everyone vaccinated voluntarily, and there will be absolutely no forced situations. “ 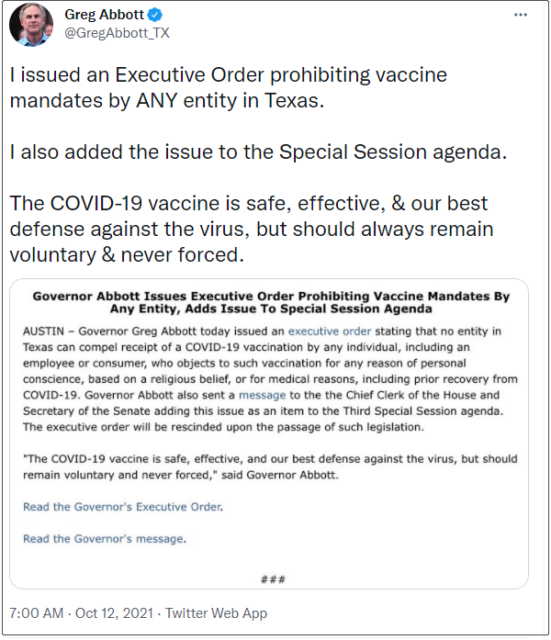 According to US media Axios on the 12th, Abbott has also submitted this issue to the agenda of the special meeting of the Texas legislature.

According to the statement of the governor’s office, once this legislation is passed, the two executive orders on vaccination of federal staff and contractors issued by US President Biden on September 9 will be revoked in Texas.

According to the National Broadcasting Corporation (NBC) report on September 9, Biden signed two executive orders on the 9th, requiring US government employees and government service contractors to be vaccinated against the COVID-19.

At the same time, the vaccine mandatory order also includes requiring enterprises with more than 100 employees to implement compulsory vaccination or weekly testing systems, and requiring all employees of medical institutions that provide medical insurance services to be compulsory vaccination. Biden criticized the 80 million U.S. citizens who have not been vaccinated: “Your refusal cost us all.”

Although the U.S. Department of Labor has not released the details of the emergency regulations, Biden last week called on companies to take action now and not wait until they take effect.

Not surprisingly, this series of anti-epidemic measures aroused the counterattack of some Republican governors, including the veteran Republican Abbott.

It is reported that this is not the first time Abbott has made remarks against vaccines. He often “contradicts” with US President Biden. Since the beginning of universal vaccination in the United States, Abbott has been on the road of “anti-vaccine” going further and further. 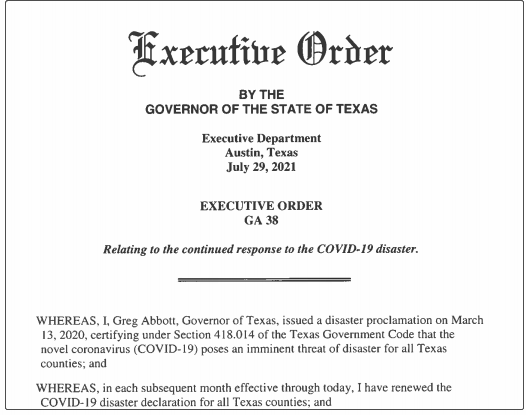 According to a report by Business Insider on August 25th, in July, Abbott issued an executive order prohibiting companies, government agencies and public schools from implementing the COVID-19 vaccine regulations, and claimed that the vaccine is only available in “emergency situations.” use.

According to commercial endometrial reports, Abbott is not the first governor to sign an executive order prohibiting vaccine authorization. At the same time, the governors of Florida, Arizona and South Dakota also announced “vaccine bans.”

In August, Abbott strengthened its “vaccine ban” even though the vaccine has been fully authorized by the U.S. Food and Drug Administration (FDA). Abbott said: “Vaccine requirements and exemptions have traditionally been determined by the legislature, and the involvement of the agency is extremely important for managing the chaotic situation of Texas vaccine regulations.”

Governor of Texas: No company can force employees to be COVID-19 vaccinated