Is the booster shot with different COVID-19 vaccines feasible?

The preliminary results of the NIH trails of mixed vaccines are announced: Is there the best combination?

Any reason why you want to receive different vaccines?

Regardless of its necessity, the enhancement of the COVID-19 vaccine is imminent. As for booster injections, a topic that cannot be avoided is whether to change the vaccine.

There are many reasons for wanting to change. From an implementation perspective, if one can be randomly changed, then the flexibility of vaccination will be greatly improved, and there is no need to worry too much about the wrong vaccine in stock.

For vaccinators, it provides an opportunity to choose again. For example, those who once had Pfizer and Moderna in front of them, but naively selected Johnson & Johnson’s 145,000 Americans. Over the past few months Basically, they are in a state of being forgotten by the FDA, CDC, and NIH. Many of them may have the idea of ​​finding another “mind master”.

More importantly, from a scientific point of view, mixed vaccines may be a way to improve the effectiveness of vaccination.

For example, the effectiveness of inactivated vaccines is relatively low, and there are many assumptions about whether mixing other vaccines can improve the ultimate effectiveness.

This point also applies to the two adenovirus vaccines of Johnson & Johnson and AstraZeneca. The other side of improving the effectiveness of vaccination is safety.

The rare thrombosis (TTS) problem of adenovirus vaccines was the main reason for the initial mixed vaccination in European countries.

Because there are many reasons to want mixed vaccines, some research institutions have already begun to do mixed vaccine research. There are two more important and more concerned. One is a trial conducted by the National Institutes of Health NIH at the beginning of the summer.

The trial used a group of 50 people to test three vaccines marketed in the United States-Pfizer, Moderna, and Johnson & Johnson’s homologous and heterologous vaccines.

The preliminary results of this experiment were announced today. The other is a mixed vaccine trial conducted in the United Kingdom, which also includes vaccines such as AstraZeneca and Novavax, and results will soon be available.

What did the NIH mixed vaccine trial answer?

The most preliminary but also the most critical question of mixed vaccines is answered by the research published by NIH:

Pfizer, Moderna and Johnson & Johnson, regardless of the initial vaccination, any one of booster injections can increase antibodies.

This answer is expected, after all, the basic function of acupuncture is to awaken immune memory. In fact, if a person who has been vaccinated becomes infected, immune memory will be activated. Viruses that are completely different from vaccines can awaken “memory”, so changing the vaccine shouldn’t be a problem.

But this is still the most critical issue, because if you want to implement a mixed vaccine booster, you must first make it clear that the mixed vaccine can be enhanced.

In short, mixed vaccines are feasible.

Is there the best combination?

However, if a person chooses a mixed vaccine, he will naturally want to find the best combination. So has this problem been solved? Unfortunately, no.

NIH’s research is limited. First of all, the number of people is very small, only 50 people in a group. Secondly, the grouping is not random, and there are differences between each group, such as the interval of booster shots that are not consistent in each group.

These limitations make it impossible to say that a certain combination is better-some small differences may be caused by differences in spacing, personnel composition, etc. 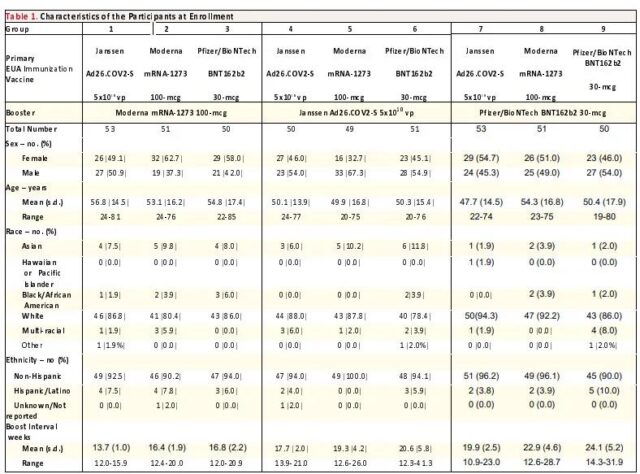 But there may be a problem with one combination: that is, both shots hit the same kind of enhancement of Johnson & Johnson. 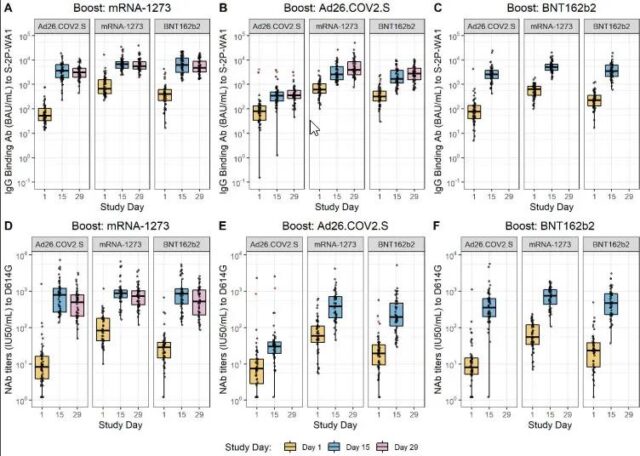 According to a modeling of the previous Phase III clinical trial of Moderna, the effectiveness corresponding to a neutralizing antibody titer of 100 is 90% (within three months). Although different vaccines may not be able to use the same model to predict, but the difference is too far, obviously requires vigilance.

On the other hand, Pfizer is similar to Moderna in terms of antibody amplitude after inoculation with booster. Perhaps it can be counted as evidence that the two vaccines are interchangeable.

Based on this recommendation, is it feasible?

It may not be enough in terms of sufficient evidence.

First of all, the mixed vaccine must solve the safety problem, and whether the safety data of the NIH study with only 50 people in each group is sufficient is questionable. 50 people and did not consider the balance of staff composition, representative safety data, is it enough to recommend an enhanced needle combination?

For example, the clinical trial results cited in the enhancement needle applications of Moderna and Pfizer both saw higher axillary lymph node enlargement than the second needle. This can be used as evidence that the response of the third needle is not weaker than that of the second needle.

However, in the NIH trial, because of the small number of people, this adverse reaction was not seen at all. Therefore, it is hard to say that the amount of data in this experiment is sufficient to judge the safety of mixed vaccines.

For example, in the study, Moderna’s enhanced needle has a very good effect. If you look at the antibody data alone, this vaccine has the most enhanced needle antibodies. But the problem is that NIH uses a dose of 100 micrograms-the initial dose of inoculation is enhanced, but now Moderna has applied for the booster shot to use a half dose of 50 micrograms. So Moderna’s results here cannot be simply analogized to actual use.

For another example, the interval between the enhancement shots in each group in the experiment was different, which was shorter than the half-year proposed now. This not only increases the difficulty of comparison between groups, it is also different from the 6-month interval applied by Pfizer and Moderna.

With the limited number of people and the difference from reality, there is a certain degree of reluctance to rely on this research to recommend mixed vaccines. However, if we focus on two issues, one is whether it is possible to allow Johnson & Johnson vaccinators to mix vaccines to improve the effectiveness, and second, whether the two mRNA vaccines can be interchanged, perhaps we can try to draw a conclusion.

Johnson & Johnson applied for the second shot after two months, which is not considered as a violation of the NIH research. The mRNA vaccine is interchangeable. Unlike Moderna, Pfizer’s dose has not changed. Therefore, if the safety data of 50 people can be accepted and the test interval is less than half a year, then it can be said that Pfizer is allowed to mix Moderna and Johnson & Johnson vaccines. . Of course, if you do this, Moderna, who was the first to join this experiment, seems to be deceived.

Obviously it is not enough. Not to mention the limited number of people in this study and the difference in vaccination intervals between different groups, the optical tracking time and the completeness of the data are still lacking.

Why are we considering enhanced needles? It is not that the initial effect of the vaccine is not good-the first batch of booster injections is now the mRNA vaccine with very good initial effect. Now consider boosting injections because some people think that these vaccines are not durable enough. Since the durability of vaccine protection is a problem, data on durability is also more important.

What is persistent data? It is not the peak antibody value two weeks or one month after the booster shot, but the antibody change in the next few months. So tracking time is very important.

NIH’s research and tracking time is very short-at least the data is very short. All combinations of antibody data for two weeks after the booster injection are complete, but Pfizer and Johnson & Johnson lack neutralizing antibodies for four weeks, and Pfizer still lacks four weeks of binding antibodies.

Based on only two or four weeks of data, it is impossible to judge whether there are differences in antibody persistence between different mixed vaccine strategies. Among them, Moderna has the most complete data on enhancement needles. Whether it is total antibody or neutralizing antibody, four weeks are less than two weeks, which is not a good sign.

However, the group enhanced with Moderna also had the shortest interval before the enhancement injection, which may also have an impact. The total antibody of the several groups in which Johnson & Johnson did booster needles was slightly higher in four weeks than in two weeks, but this may also be due to the slightly longer interval between these groups. In any case, longer tracking is clearly critical.

Also missing are all immunization data except antibodies. It is hoped that the theoretical basis for improving the final vaccination effect through mixed vaccines is not simply to obtain more antibodies, but also whether to obtain better cellular immunity, whether to increase the breadth of immune recognition (whether it is more effective against mutations), and whether it is more perfect Immune memory.

Proving that mixed vaccines and non-mixed vaccines can stimulate the immune response is certainly an important first step, but the longer-term goal should be to clarify whether mixed vaccines have advantages, and whether it is possible to permutate and combine to create a better vaccination method. .

In general, the results of the NIH current study should be used as supporting evidence for mixed vaccines. Of course, similar studies have been done in the UK.

The problem is that this evidence is insufficient, after all, the interval and dose in it are deviated from reality. In addition, it is better to infer a certain vaccination strategy based on this. It is impossible in terms of experimental design and completeness, but I am afraid that it will not prevent many people from starting to speculate.

Is the booster shot with different COVID-19 vaccines feasible?