The latest recommendation of the US Federal Expert Panel: People aged 60 and above should not take aspirin to prevent heart disease.

The US Preventive Services Task Force (USPSTF) issued a statement on Tuesday (October 12) that it is considering some changes to its guidelines on taking aspirin every day to prevent heart disease and stroke.

The Preventive Services Working Group recommends that adults between 40 and 59 years of age who are at a higher risk of cardiovascular disease but have no history of the disease should decide with their clinicians whether to start taking aspirin . The specific situation needs to be discussed based on their personal health.

This is the first time the working group recommends that adults over 40 years of age discuss with their doctors whether to take aspirin to promote heart health.

The draft statement also stated that adults 60 and older should not start taking aspirin to prevent heart disease and stroke . According to the working group, new evidence suggests that the potential harms of taking aspirin outweigh the benefits. 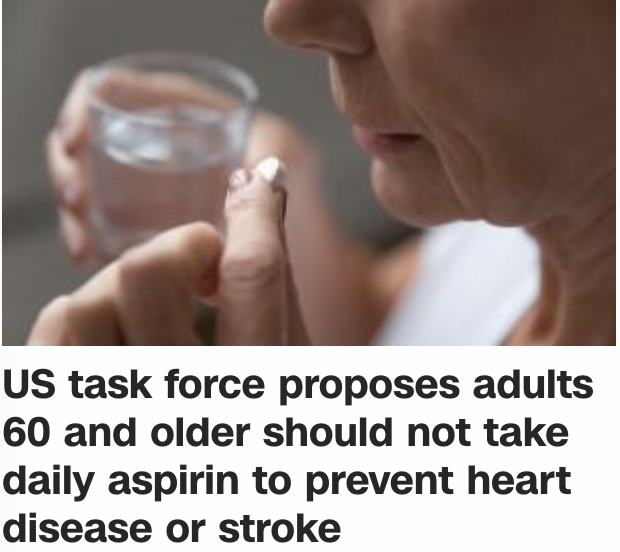 “The latest evidence is clear: it is not recommended that people 60 years of age or older start taking aspirin every day to prevent their first heart attack or stroke,” Dr. Chien-Wen Tseng, a member of the task force, said in a statement . “However, the recommendations of the working group do not apply to people who have already taken aspirin due to a previous heart attack or stroke; unless their clinician instructs otherwise, they should continue to do so. “

Heart disease is the leading cause of death in the United States, and about a quarter of people die of heart disease. According to the working group, although daily low-dose aspirin has been shown to reduce the risk of heart attack or stroke in some people, doing so also carries a serious risk of potential bleeding in the stomach, intestines and brain. The risk of bleeding increases with age .

“Taking aspirin daily may help prevent heart attacks and strokes in some people, but it can also cause potentially serious injuries, such as internal bleeding,” Dr. John Wong, a member of the working group, said in a statement Said in. “It is important that people between the ages of 40 and 59 and no history of heart disease talk to their clinicians to decide whether starting aspirin is right for them.”

The new draft recommendations update the 2016 final recommendations of the working group on the use of aspirin to prevent cardiovascular disease and colorectal cancer. But the new draft only focuses on the prevention of cardiovascular disease and calls for more research around the use of aspirin to prevent colorectal cancer.

Other groups have previously pointed out that the risks of taking low-dose aspirin daily would offset these benefits.

In 2019, the American College of Cardiology and the American Heart Association issued guidelines stating that daily low-dose aspirin is no longer recommended as a preventive measure for elderly people who do not have a high-risk or existing heart disease.

In 2018, three studies published in the New England Journal of Medicine showed that daily low-dose aspirin regimens have no significant health benefits for healthy elderly people. On the contrary, it may cause serious harm to them.

People aged 60 and above should not take aspirin to prevent heart disease.