Heart failure (HF) is a serious manifestation or late stage of various heart diseases. Its mortality and readmission rate remain high, affecting 6.5 million Americans. About half of patients with heart failure have heart failure with preserved ejection fraction (HFpEF).

HFpEF is characterized by myocardial stiffness and increased pressure inside the heart during exercise. Once heart failure occurs, there is no cure. Therefore, a very important point is how to prevent it from happening.

Left ventricular sclerosis begins in middle age, even if there is no underlying disease, sedentary and aging will make it gradually stiff.

Studies have shown that long-term exercise training can improve the heart elasticity of young people, but it has no effect on the heart stiffness of the elderly.

However, the hearts of middle-aged people retain a lot of plasticity, and their left ventricular myocardial stiffness and biomarkers are between normal and heart failure patients. This seems to represent a transition state from a healthy heart to HFpEF, which may be The ideal target group for behavior modification.

The study conducted a one-year exercise test on 46 sedentary middle-aged men and women aged 45 to 64 years old and found that vigorous exercise training for one year can reduce the stiffness of the left ventricular myocardium.  Therefore, strenuous exercise training can provide such patients with protection against the risk of heart failure while preserving the ejection fraction.

The research team recruited 46 subjects, 31 of whom completed the one-year trial. These people were divided into two groups: 11 people were randomly assigned to the control group and prescribed yoga, balance and strength 3 times a week. train.

Twenty people are assigned to individually customized walking, cycling or swimming exercise programs, at least twice a week, at least 30 minutes of intensive aerobic interval training, plus 2 to 3 moderate-intensity training and twice a week Strength Training. 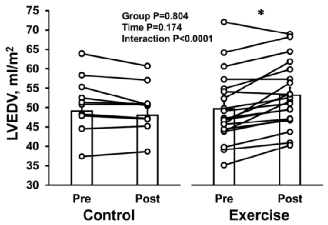 One year of vigorous exercise training significantly increased the resting stroke volume of the exercise group, accompanied by a drop in heart rate from 68±11 bpm to 64±11 bpm.

The resting stroke volume of the control group was reduced, and the heart rate did not change significantly. 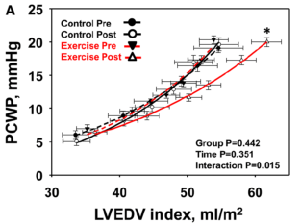 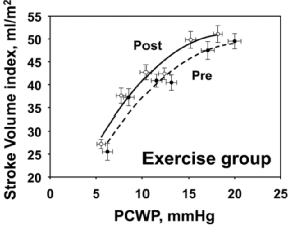 High-risk middle-aged men and women perform long-term vigorous exercise training 4 to 5 times a week, which is expected to be a potential intervention to prevent such patients from developing heart failure risks in the future.