The incretin axis originates from the response of intestinal endocrine cells to food intake. Incretin mainly contains glucose-dependent insulinotropic peptide (GIP) and glucagon-like peptide 1 (GLP-1), which are separated from the proximal intestine. K cells in the tract and L cells in the distal intestine are produced.

GLP-1R agonists have achieved great success in the treatment of type 2 diabetes (T2D) in the past 20 years, but there is little interest in GIP.

The study has identified GIPR as a gene that affects body mass index (BMI).

However, the recent excellent performance of tirzepatide has rejuvenated GIP, and many previously held views have been challenged.

Glucagon is no longer regarded as a single blood glucose booster, because the insulin-stimulating effect of glucagon on beta cells can lower blood sugar.

In view of this, GIPR in α cells induces greater insulin secretion through α-β cell communication promoted by glucagon secretion, not only through GIPR in β cells.

Although some early theories of GIP biology are being overturned, the contribution of GIP activity to body weight is still controversial.

In fact, there is increasing evidence on both sides of this debate that activation or inhibition of GIPR can reduce obesity and weight.

GIPR is expressed in specific cell types throughout the body, many of which directly or indirectly control body weight.

GIPR is widely expressed in rodent brains. According to reports, GIPR is expressed in rat cerebral cortex, hippocampus, olfactory bulb, brainstem and cerebellum, which is consistent with the regions identified by radiolabeled GIP binding analysis, in situ hybridization and qPCR analysis.

The protective effect of diet-induced obesity observed in GIPR−/− mice has led people to try to develop GIPR antagonists. Early studies used modified GIP as a competitive antagonist, of which (Pro3)GIP is the most commonly used reagent.

The substitution of proline at position 3 of GIP for the glutamic acid residue increases its resistance to DPP4 cleavage and antagonism. Rodent studies have shown that (Pro3)GIP can reduce the body weight of WT obese mice fed high-fat, but it is not observed in ob/ob mice.

The mechanism by which (Pro3)GIP regulates body weight is not yet clear, but it does not seem to be achieved by reducing food intake.

In addition, further studies have found that this GIP sequence substitution is a full agonist in hGIPR, but a partial agonist in rodents. Therefore, it seems that (Pro3)GIP was initially mistakenly regarded as a GIPR antagonist, or more accurately a weak partial agonist.

Gipg013 is the first identified inhibitory antibody against human GIPR, and it is also a complete antagonist of mGIPR.

In obese WT mice, intracerebroventricular (icv) injection of Gipg013 every other day caused a sharp drop in body weight within two weeks, which was caused by reduced food intake. When Gipg013 was injected into obese ob/ob mice, no weight loss was observed.

In these studies, peripheral injection of 15 mg/kg Gipg013 had no effect on body weight. When the mice start high-fat feeding, the peripheral administration of Gipg013 at a higher dose (30 mg/kg) can prevent weight gain and has a moderate weight loss effect on the already obese mice.

Several studies have investigated the effect of chronic GIPR activation on body weight and glucose tolerance in preclinical models. (D-Ala2) GIP is a long-acting DPP4-resistant GIP analog. It is administered at 24nmol/kg twice a day for 8 weeks.

The resulting chronic activation will not change the weight and food of high-fat fed mice. Intake, body composition, or energy expenditure. When obese mice were given a daily dose of 10 nmol/kg of the acylated GIP analog, body weight and food intake decreased moderately, indicating that higher doses or greater exposure have a greater impact on metabolism.

In addition, a different acylated GIP analog (ZP4165, 10-50 nmol/kg) was weight-neutral after 4 weeks of treatment in obese db/db mice.

In addition, when GIPR agonists are used in combination with GLP-1R agonists, they can produce additive or synergistic effects in reducing the weight of mice, although the mechanism of this effect is still unclear. The leading molecule in this class is tirzepatide, which is a GIPR/GLP-1R dual agonist, which has been shown to significantly reduce weight in preclinical and clinical studies.

Interestingly, studies on the pharmacology of tirzepatide revealed an imbalanced binding between incretin receptors, and GIPR has a greater degree of binding than GLP-1R. In summary, data from GIPR activation alone and evidence from multi-receptor agonists containing GIPR activity indicate that chronic activation of GIP does not promote weight gain or obesity, but may reduce weight.

Hypothesis that reconciles activation and inhibition

At present, the biological role of GIP in regulating body weight is not clear, and the experimental evidence in this area is also inconsistent, and conclusions often depend on research design or drugs. This leaves the question of how to apply GIPR signals to pharmacology.

Should GIPR be activated or inhibited? There is evidence that these two methods have potentially meaningful effects on body weight and metabolism. But how can activation and inhibition of the same system produce similar results?

This is a scientifically interesting question, but the obvious paradox has become a frustrating “dead end”, limiting the progress of clinical translation in this field.

What is often overlooked is that similar paradoxes exist in studies targeting GLP-1R. The clinical success of GLP-1R agonists supports the enhancement of GLP-1R signaling to treat obesity.

However, chronic inhibition of both Glp1r-/- mice and GLP-1R has a protective effect on diet-induced obesity. Therefore, the activation-inhibition paradox actually applies to these two endocrine hormones.

The development of the incretin receptor knockout model shows that there seems to be overlap on these two signal axes. This is highlighted by the fact that after one incretin receptor is knocked out, the effect of the other incretin is increased. This was the first discovery in a study that when GLP-1 was administered to Gipr-/- mice, insulin secretion was significantly enhanced. Further studies have shown that this relationship is two-way. GIP stimulation in Glp1r-/- mice will promote a decrease in blood sugar and an increase in insulin secretion. At present, there is strong evidence that there is a mutual compensation phenomenon between incretins, but the mechanism is still unclear.

This relationship between incretin receptors also extends to weight loss. Studies have shown that GLP-1R agonists can produce greater weight loss effects when administered to Gipr-/- mice than wild-type mice. However, GIP administration in Glp1r-/- mice did not find a similar weight loss. This result may be affecting the nervous system. Clearing GIPR in the brain can enhance the activity of GLP-1R, thereby changing body weight. In the absence of GLP-1R agonists, Gipr-/- mice have normal food intake, indicating that endogenous GLP-1R signals are insufficient to alter energy balance or are compensated by other mechanisms. In any case, preclinical research provides support for the interaction of incretin receptor signaling.

Although incretin receptor dysfunction studies provide evidence of metabolic plasticity and compensatory properties, more research is needed to clarify this area. In addition, since energy balance is a strictly regulated parameter, this response seems to be an attempt to maintain homeostasis. Decades of studies have also shown that the incretin system is the main factor controlling the stability of the internal environment after a meal. Removal of the incretin signal may put extra stress on these complementary systems, resulting in a certain degree of metabolic inefficiency. 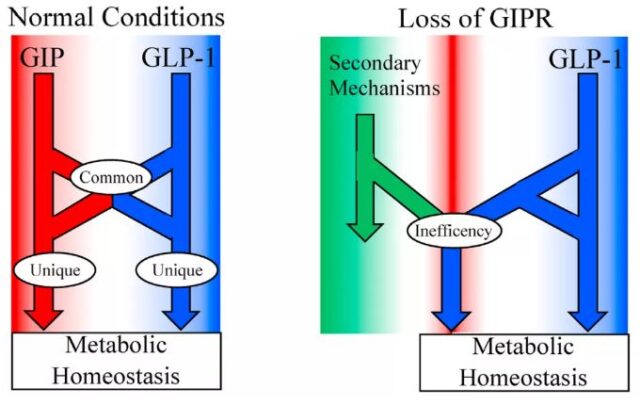 However, if these potential compensation pathways are not clarified, it is difficult to predict how this metabolic inefficiency will manifest. This low efficiency can explain the increased energy expenditure due to the loss of incretin receptor signals and the resulting protective effect on diet-induced obesity. Some potential candidate mechanisms to explain the increase in energy expenditure may include changes in substrate utilization, changes in body temperature, or ineffective circulation. Although this is still an untested hypothesis, its potential to explain weight regulation factors provides motivation for studying the mechanisms that promote the plasticity of the incretin system.

The second hypothesis proposed to explain the role of GIPR signaling in weight loss is that chronic activation of GIPR will cause desensitization of the GIP system and ultimately produce the same results as GIPR antagonists. 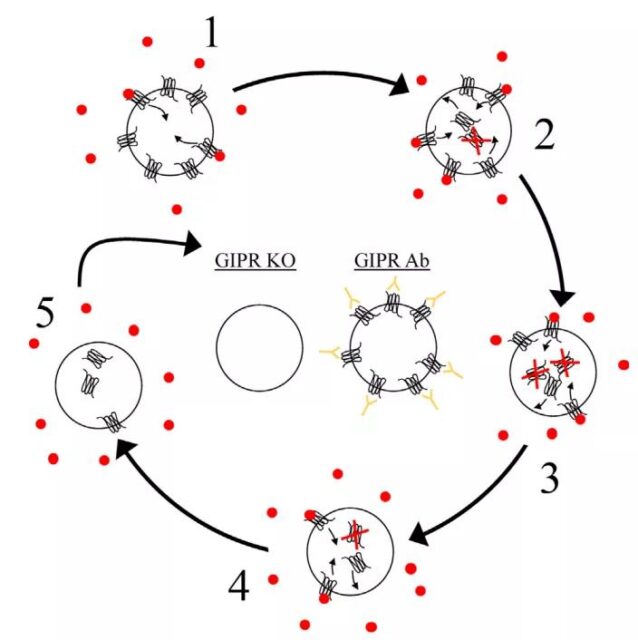 It has been demonstrated that GIPR in 3T3-L1 adipocytes is desensitized, and the initial stimulation of the ligand reduces the response to subsequent stimulation. This study showed that the initial GIP stimulation resulted in the internalization of GIPR, and the slow recirculation rate ultimately reduced the number of GIPR in subsequent ligand interactions.

It has recently been reported that mouse adipose tissue has similar desensitization effects to long-acting GIPR agonists. Differentiated mouse or human preadipocytes were exposed to 1μM (D-Ala2) GIP in culture for 24 hours, and the cAMP response to subsequent GIPR activation was reduced, indicating GIPR desensitization.

In general, the interpretation of these data is subject to some restrictions. First, the use of extremely high peptide concentrations (10–1000 nM) puts the applicability of GIP into question.

In fact, it has recently been estimated that the current tirzepatide at the highest clinical dose (15 mg) produces a free peptide concentration of ∼0.7 nM, which is several orders of magnitude lower than the value used to prove receptor desensitization.

Direct measurement of the number of GIPR in primary cells after chronic activation has not been done, partly because of the lack of the required high-quality reagents.

In addition, recent evidence shows that continuous exposure to high concentrations of GIP does not produce rapid desensitization in healthy subjects or T2D patients. However, this result is that the GIP concentration is not as high as the dose in preclinical studies, and it measures insulin secretion, not the result of measuring GIPR activity or energy balance in adipose tissue, so it is obvious that there is still a lot of work to be done.

Although there are many doubts, if agonist-induced desensitization eventually produces a state similar to GIPR knockout or GIPR antagonist, this will explain how chronic activation and receptor inhibition produce weight loss effects.

The contribution of GIP to metabolic homeostasis was first discovered by John Brown and others in the 1970s. However, nearly 50 years later, how GIP controls metabolism seems to be more confusing rather than clear.

The effects of GIPR signals on energy balance and body weight are examples of several basic controversies about the role of GIP in physiology and pharmacology.

Similar to most scientific debates, both GIPR and weight issues have numerous and convincing arguments that both increases and decreases in GIP function can provide positive results in terms of weight and blood sugar control.

Therefore, the current field is still at the phenomenological stage, that is, regulating GIPR activity in any direction can actually affect body weight.

Without a deeper understanding of the biology of GIP, the debate about activation and inhibition cannot be truly resolved, and the potential consequences of these two interventions cannot be predicted.

It is hoped that it will not take another 50 years to have the necessary understanding of the metabolic effects of GIP, so as to guide it in the correct treatment of metabolic diseases.