For a long time, a popular saying is that 1 year old dog is equivalent to 7 years old for humans. This argument may be because the average life span of humans is around 70 years, while dogs are usually around 10 years.

However, this calculation method is obviously not accurate. A 1-year-old dog has passed puberty, and a 7-year-old human is just a child.

DNA methylation is a form of DNA chemical modification that can change genetic performance without changing the DNA sequence.

A large number of studies have shown that DNA methylation can cause changes in chromatin structure, DNA conformation, DNA stability, and the way in which DNA interacts with proteins, thereby regulating gene expression.

In addition to humans, other species also undergo DNA methylation as they age. For example, mice, chimpanzees, wolves, and dogs all seem to have epigenetic clocks.

In order to find out how these epigenetic clocks are different from human clocks, geneticist Trey Ideker of the University of California, San Diego, and others started their research on dogs, a good friend of humans.

The research was published in Cell Systems journal under the title: Quantitative Translation of Dog-to-Human Aging by Conserved Remodeling of the DNA Methylome. 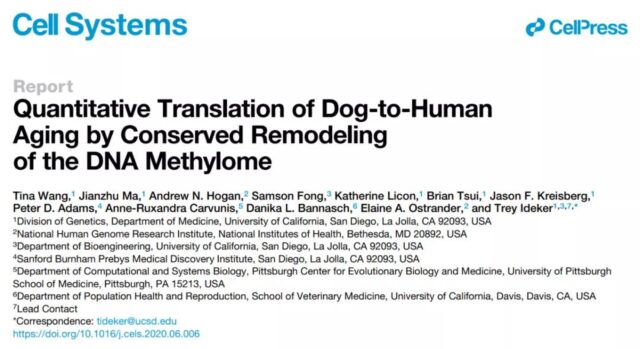 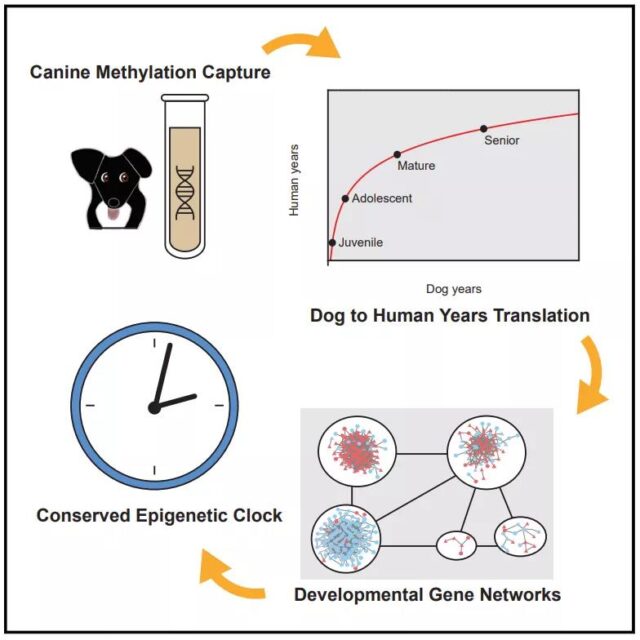 Although dogs were separated from humans in the early stages of mammalian evolution, they are still a good comparison object because dogs and humans live in the same environment, and pet dogs receive similar medical care and hospital treatments to humans.

All dogs (regardless of breed) follow a similar developmental trajectory, entering puberty at about 10 months and dying before the age of 20.

The research team analyzed the DNA methylation patterns in the genomes of 104 Labrador dogs, ranging in age from 4 weeks to 16 years old.

Their analysis showed that certain genomic regions of Labrador dogs and humans do have similar age-related methylation. The similarities between puppies and children, and elderly dogs and the elderly are the most obvious.

Most importantly, they found that during the aging process of two species, dogs and humans, certain genomes involved in development are similarly methylated.

The research team used the rate of methylation change in dogs to match the human epigenetic clock, and the resulting age transition of dogs is much more complicated than “multiplying by 7.”

The researchers compared the age of Hollywood superstar Tom Hanks with Labrador. It can be seen from the figure that the epigenetic clock of dogs before the age of two is much faster than that of humans.

The two-year-old Labrador may look like a puppy, but in fact its biological age has reached Middle-aged, the equivalent of a human being 42 years old. 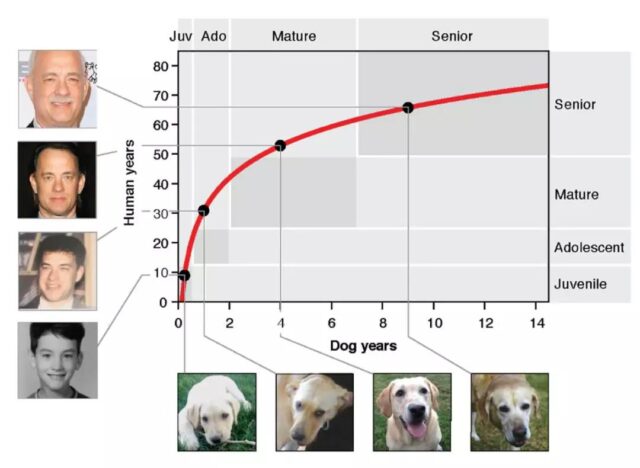 Using this formula to calculate, it can be found that the life stages of dogs and humans are consistent. For example, a 7-week-old puppy is equivalent to a 9-month-old human baby, and both are just beginning to grow teeth. 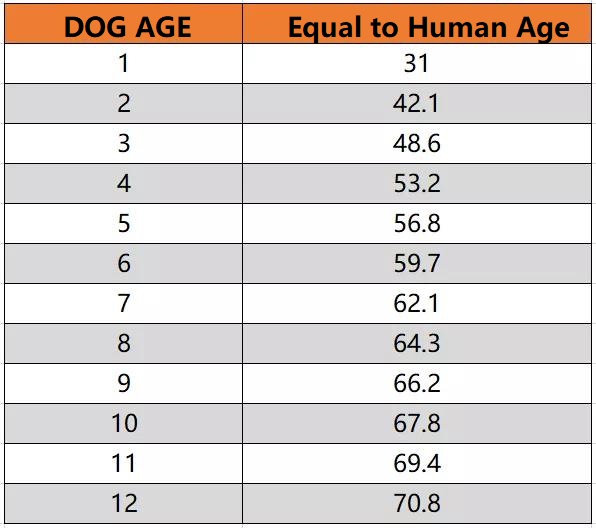 In general, these findings indicate that the degree of DNA methylation in both species of dogs and humans gradually increases with age. If this technique is applied to issues such as the different life spans of different dog breeds, it may reveal more interesting results.

The research team hopes to study these epigenetic characteristics in all dog breeds, hoping to find out why some dogs get sick or die earlier than normal when they are young, while others live longer and are disease-free. Research on human aging and longevity.