Japan 1200+ death after COVID-19 vaccination but Zero related to vaccine??

Japan 1200+ death after COVID-19 vaccination but Zero related to vaccine??

There are more than 1200 death reports after vaccination ….., buy why zero case was related to the death related to COVID-19 vaccine?

“Is it true that many people have died from the COVID-19 vaccine?” This is a question posted in the Q & A section of the Japan Ministry of Health, Labor and Welfare website. The answer is, “There are no cases that have been determined to have a causal relationship with vaccination.”

By the 3rd of this month, 1255 deaths have been reported after vaccination, but none have been identified as the cause of death by the vaccine. Most of the causal relationships are unknown. Why. (Chiaki Sawada) 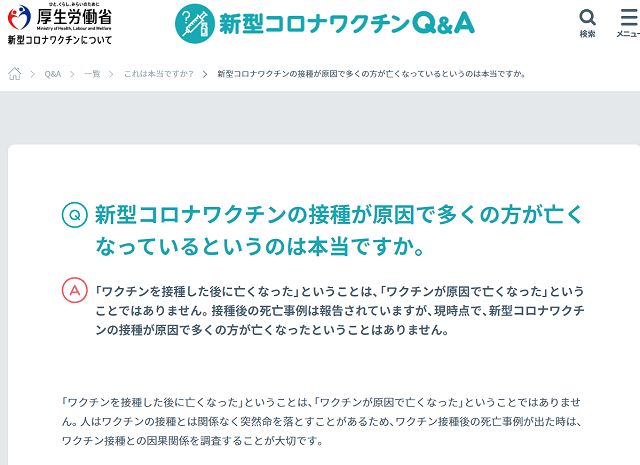 Homepage of Ministry of Health, Labor and Welfare

“A young man who had no history of mental illness and worked normally. He suddenly developed mental illness after vaccination. The causal relationship cannot be denied or affirmed, and I think we should try to collect similar adverse events.” .. Experts commented on a 25-year-old man who committed suicide four days after the first Pfizer vaccination in April.

At the side reaction study group of the Ministry of Health, Labor and Welfare on the 22nd of this month, cases of death of young people due to myocarditis were also reported. A 24-year-old man died at home three days after hitting a second Moderna hit in August. As a result of autopsy, the cause of death was determined to be acute myocarditis.

In September, a 27-year-old man died of fulminant myocarditis 16 days after the first Pfizer. A person in charge of the Ministry of Health, Labor and Welfare introduced the opinion of an expert that “(the cause) is viral myocarditis and there is no contradiction, but the effect of the vaccine cannot be denied.” In each case, it is unclear whether the causal relationship with the vaccine is under investigation.

“Vaccines cause deaths one after another” “Vaccines are murder weapons”. There is an unfounded discourse in Chimata. A member of the subcommittee suggested in September, “With more than 1,000 death reports, it is better to let the public know that it is difficult to find a causal relationship even though we are dissecting and inspecting.”

According to the Pharmaceuticals and Medical Devices Agency (PMDA), the “evaluation” to determine the relationship between vaccines and death is carried out by a pair of experts in respiratory, circulatory, and neurological departments selected by PMDA. If the opinions are divided, a third person will be added. 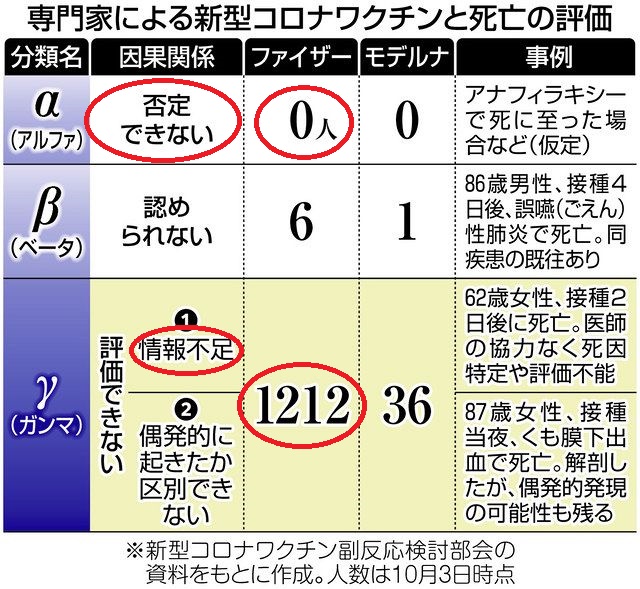 So far, there is no “α (alpha)” classification whose association with vaccines cannot be denied. If you die from anaphylaxis, you can become alpha, but most of them are unevaluable “γ (gamma)”. The reason is “indistinguishable from accidental events that can occur without a vaccine” (PMDA).

The most common causes of death after vaccination are heart diseases such as angina and myocardial infarction in people aged 65 and over, and stroke and arrhythmia in people under the age of 65, which may have occurred without vaccination.

How can we distinguish between such cases and deaths from vaccination? PMDA states that “there is no choice but to accumulate cases.” It is difficult to judge until many deaths are collected in the future.

At the subcommittee, which always concludes that “there are no serious concerns about the safety of vaccines,” the committee members say, “It is necessary for (the public) to understand the limits of modern medicine.”

Nobuhiko Okabe, director of the Kawasaki City Institute of Health and Safety, who participated in the session on the 22nd as a reference, said, “If you wait for the elucidation of the causal relationship, the disease will spread. Experts are always worried about the balance of the disease. “

“It can be caused not only by certain side reactions but also by vague anxiety. Don’t rush, don’t panic, and give scientifically valid explanations in both directions while listening to the questions of the people.”