Although there have been significant advances in cancer treatment in recent years, the main options for cancer treatment still include surgery, chemotherapy and radiotherapy. This limitation is a problem for aggressive cancers, such as glioblastoma multiforme (GBM), which is usually resistant to traditional therapies.

Brain cancer GBM is a highly malignant glioma (glioma), an aggressive cancer of the central nervous system with poor immunogenicity, which means that it cannot cause a good host anti-tumor response. Because GBM tumor cells can metastasize and invade normal brain tissue, the recurrence rate after treatment is high, and the average survival time after diagnosis is only 12-16 months. 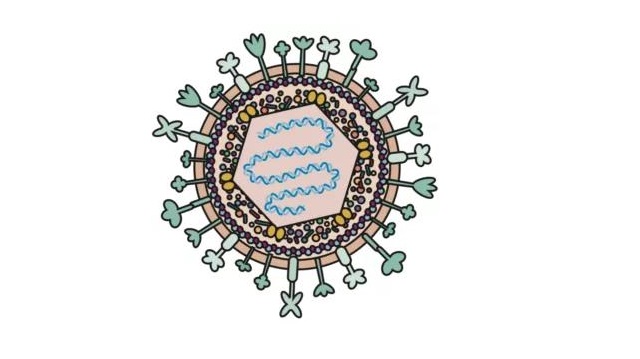 Oncolytic virotherapy is a treatment strategy that uses viruses that have the ability to replicate in the human body to infect and destroy cancer cells.

Herpes simplex virus type 1 (HSV, as shown in the figure above) is an attractive oncolytic virus that can be used in cancer treatment.

The virus can be used for cancer treatment because it has the following advantages:

1. It is a widespread human pathogen that does not integrate with the host DNA;

2. It has a very large genome with many dispensable genes, which can be replaced with foreign sequences;

3. It infects many types of cells, and has natural cytosolubility, that is, it can kill the cells it infects;

4. It has a fusion glycoprotein that can be modified to specifically target cancer cells;

5. It is neurophilic and is particularly suitable for the treatment of brain cancers such as GBM.

Therefore, R-LM113 can only replicate in cells expressing hHER2, but cannot enter cells expressing HSV natural receptors. In a recent report, the research team further modified R-LM113 to include the mouse IL (interleukin, interleukin) -12 gene. IL-12 is a cytokine that increases the effectiveness of oncolytic viruses by recruiting T lymphocytes to initiate a cytotoxic response.

The researchers then tested the effectiveness of the IL-12-expressing virus (named R-115) in a GBM mouse model that is resistant to most cancer treatments.

In order to establish a mouse model, the authors infected the neural precursor cells of BALB/c mice with a retrovirus encoding PDGF-B. PDGF-B is a growth factor that is known to be overexpressed in these cells to induce glial Tumor (gliomas). These cells were then transplanted into the brains of adult mice.

Within about 100 days, the transplanted cells also developed gliomas, which express histologically similar to high-grade human gliomas and have the same low immunogenicity markers. The author collected these gliomas, then microdissected and cultured them to produce cells that they designated as mother cells.

Some of these parental tumor cells are designed to express hHER2, generate hHER2 tumor cells, and then transplant these cells into the skull of mice, where they continue to produce highly malignant gliomas.

Three weeks after the hHER2 tumor cells were implanted, mice in different groups were injected with HSV constructs R-LM113, R-115 or γ-irradiated R-LM113 as a negative control treatment. The diseased mice in the control group survived for an average of 13 days after receiving the treatment.

In order to see whether R-115 induces cancer-specific immune memory, two other long-term surviving mice treated with R-115 received a second hHER2 tumor cell implantation. Although they did not receive further treatment, they still remained after 220 days. Alive. Then, the authors implanted these mice for a third time, this time implanting maternal tumor cells lacking hHER2 receptors.

It is worth noting that the mice still did not develop gliomas, indicating that the initial treatment with R-115 caused strong immunogenicity, leading to long-term resistance to tumor cells, even if the tumor cells did not express the hHER2 receptor.

Because they observed an increase in the number of T lymphocytes in the blood of mice infected with R-LM113 or R-115, the authors analyzed the presence of CD4 and CD8-positive T cells in the mouse brain. The analysis showed that in mice treated with R-LM113, T cells tended to accumulate at the edge of the tumor.

In contrast, CD4 and CD8 positive T cells penetrated deeply in tumors of mice treated with mIL-12-expressing R-115. This suggests that mIL-12 may make the tumor microenvironment more susceptible to the infiltration of cytotoxic lymphocytes.

It should be noted that, based on previously established survival data, treatment is performed shortly before the onset of disease symptoms. If treatment is started when symptoms are fully onset, it will be interesting to observe whether the treatment is still effective.

Along these lines of thinking, we can reasonably assume that the heterogeneity observed in treatment response can be attributed to the difference in tumor size during treatment. The percentage of infected cells in large tumors may be smaller than that in small tumors, which is also a factor that affects the strength of the immune response.

Although these results are encouraging, we must remember that mouse models do not represent all the complexities of human cancer. Richard Klausner, former director of the National Cancer Institute, once said: “The history of cancer research is the history of curing cancer in mice. For decades, we have been treating cancer in mice. But it has no effect in humans.” Despite this, mouse research has provided a wealth of information on human molecular biology and still provides an indispensable platform for preclinical research.