Colon examination may be changed by New technology: Robot Capsule

Colon examination may be changed by New technology: Robot Capsule.

On the palm of a man (46) was a capsule with a width of 1 cm and a length of 3 cm with an ultra-small camera inside. If you swallow it with water, the detailed examination will start.

In late April, Fujita Health University Hospital in Toyoake City, Japan . The man began walking in the hospital so that the capsules flowed smoothly through the body.

Capsule endoscopy reaches the large intestine in about two hours. Take four to thirty-five pictures per second inside the intestinal tract and send them to a recording device worn on the waist. Unlike general colonoscopy, in which a tube with a camera is inserted through the anus while lying down, it is characterized by no embarrassment or pain. About seven hours later, the man who took the laxative and took the capsule with his stool seemed satisfied, saying, “It didn’t hurt at all.”

The university hospital has been using capsule endoscopy since 2007. It has been 14 years since the colon examination using capsules was covered by insurance for those who needed a detailed examination for fecal occult blood test following the small intestine and those who had symptoms such as bloody stool. However, the condition was that it was difficult to insert the tube because of adhesions in the intestinal tract.

It was relaxed in April 20th. The application has expanded to those who are severely obese and have chronic diseases such as hypertension and who have a heavy burden with conventional endoscopes, and those who have a long large intestine and have constipation that makes it difficult to advance the tube to the back.

According to the Japan Capsule Endoscopy Society, as a result of fecal occult blood test, it is estimated that about 3% of people who need a detailed test, or about 10,000 people a year, will be targeted.

A man with constipation was insured because a test showed that his large intestine was longer than usual. Naoki Omiya (57), a director of the Society and a chief professor of advanced optical medicine at Doshisha University, who specializes in gastroenterology, says, “It’s just a drink, so it’s less burdensome.”

On the other hand, even with a 30% burden, the examination cost is 30,000 yen, which is about six times that of colonoscopy. The burden on doctors who read 30,000 to 100,000 photographs per person is heavy, and depending on the shape of the large intestine, there are cases where data can only be obtained halfway. This is because the battery runs out if it takes a long time to pass.

According to “Covidien Japan” (Tokyo), which manufactures and sells colon capsule endoscopes only in Japan, the colon capsule is used in about 300 facilities in Japan, but the number of cases using insurance was in FY18. Only about 800 cases.

The movement to improve the pain of the test is gradually progressing. In 2012, computed tomography (CT) of the large intestine became covered by insurance. Inflate the intestinal tract with carbon dioxide from the anus, and take two shots of the prone position and the prone position.

It is common to drink a large amount of bowel irrigation (laxative) in advance to empty the intestines, but “each test has its own characteristics and problems,” says Omiya.

Unlike general colonoscopy, even if a polyp or lesion is found in both capsule and colon CT, it is not possible to take and inspect the tissue on the spot. CT using X-rays has an ultra-low dose but is exposed to radiation, and polyps and flat lesions of 6 mm or less may be overlooked.

Colonoscopy is increasing the number of facilities that infuse sedatives to relieve pain, but blood pressure may drop and breathing may become shallow, so careful administration is required.

Many people are reluctant to have a difficult test to find a disease. Mr. Omiya says, “Being less burdensome encourages people to undergo a detailed examination and reduces the mortality rate of colorectal cancer.” 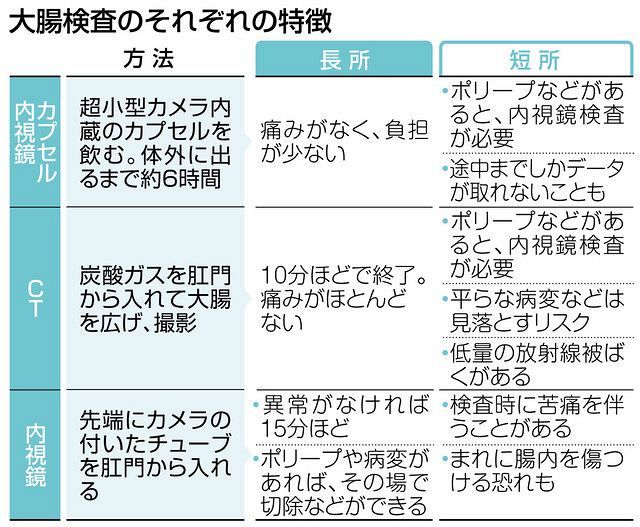 Colon examination may be changed by New technology: Robot Capsule.