How does spinach affect the gut microbiota and prevent colon cancer?

How does spinach affect the gut microbiota and prevent colon cancer?

According to the latest global cancer burden data released by the International Agency for Research on Cancer (IARC) of the World Health Organization in 2020.

The vast majority of colon cancers (85%-90%) are sporadic, which means they are not caused by genetic variation.

Carcinogens in the diet and environment can change the way genes are expressed in the gastrointestinal tract, leading to colon polyps and possibly cancer.

This is why the American Cancer Society recommends starting colorectal cancer screening at the age of 45.

Intestinal flora is closely related to human health. For example, studies on sterile colon cancer models have shown that compared with corresponding animals under conventional feeding conditions, intestinal inflammation and tumor prognosis have been improved.

Previous studies have shown that eating green vegetables and fiber can reduce the risk of colon cancer by half. However, little is known about how these dietary intakes affect the interactions between the gut microbiota, host transcriptomics, and the pathogenesis of colon cancer.

Recently, a research team from the Health Science Center of Texas A&M University in the United States published a research paper titled Dietary spinach reshapes the gut microbiome in an Apc-mutant genetic background: mechanistic insights from integrated multi-omics in the Gut Microbes journal.

The study found that in the rat colon polyp model through multi-omics techniques, the consumption of spinach has a significant anti-cancer effect. Metagenomic prediction involves the metabolism of linoleic acid and butyric acid, the tricarboxylic acid cycle, and cancer pathways. This is supported by transcriptomics and metabolomics analysis, laying the foundation for the future development of methods to prevent colon cancer.

The research team used a genetic disease model called familial adenomatous polyposis, Pirc, which is a genetic disease that causes multiple noncancerous growths (polyps) in the colon in young people. Most people with this disease must have their colon removed surgically and receive toxic NSAID treatment to prevent tumors from forming in the colon and small intestine.

After feeding freeze-dried spinach to Pirc rats for 26 weeks, the research team observed significant anti-cancer activity in the colon and small intestine.

In fact, tumor suppression occurred as early as the 8th week of feeding spinach, and the tumor was significantly suppressed after the 16th week. Immunohistochemistry and WB experiments showed that the overexpression of β-catenin protein in tumors was not affected by spinach.

Therefore, despite the genetic background of Apc mutations, the research team is still exploring anti-cancer mechanisms other than down-regulation of β-catenin protein. 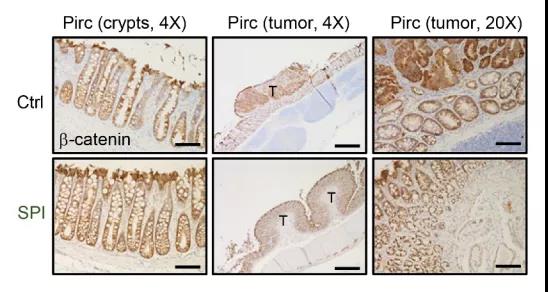 Next, the research team used multiple omics methods to discover the connections between different systems in the body.

This shows that diet plays a more dominant role in shaping the inter-individual variation of the host-related microbiota than genetic background.

Finally, they used RNA-seq to identify five pathways that are significantly altered in Pirc’s colon. Three of these pathways are further altered in colorectal tumors, namely, inflammation, TNFα signaling through NFκB, and myogenesis. They verified that Cxcl6, Serpine1 and Il-1b, Hspb8, Tpm2, and Fhl1 were down-regulated in Pirc, while MYH11 and Myl9 were up-regulated in Pirc.

In conclusion, this work proves that spinach has a significant anti-cancer effect in the Apc mutant colon polyp rat model, and confirms the significant remodeling of the intestinal microbiome of rats fed spinach, as well as the host transcriptomics and metabolome. Changes have laid the foundation for the development of methods to prevent colon cancer in the future.