Cell Sub-Journal: This intestinal bacterium promotes carcinogenesis of colon polyps and can be used as a cancer predictor.

Colorectal cancer (CRC) is a common cancer that begins with a precancerous lesion called a polyp. Colorectal polyps are caused by disorders of the proliferation and apoptosis of the colonic epithelium.

To date, no studies have reported differences in the composition and function of the microbiota between TAP and SSP lesions.

There are more than 1,000 kinds of bacteria colonized in our intestines. They form the intestinal microbiota and are one of the foundations of human health.

Changes in the intestinal microbiota are related to colorectal polyps. Certain bacteria have been identified as possible carcinogenic drivers.

These bacteria promote tumor development through virulence mechanisms, indicating that chronic infection and inflammation of bacteria contribute to the occurrence and development of tumors.

However, the role of bacteria in the development of polyps is unclear.

On September 17, 2021, the research team of the University of Washington published a research paper titled: Genomic and functional characterization of a mucosal symbiont involved in early-stage colorectal cancer in Cell Host & Microbe.

By highlighting strain-specific genomic and proteomic differences, as well as broader compositional differences in the microbiome, this study proved that Bacteroides fragilis promotes the carcinogenesis of colon polyps and can be used as a risk predictor for colorectal cancer. 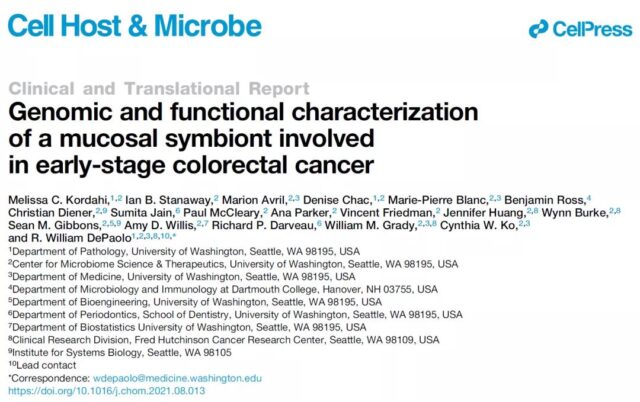 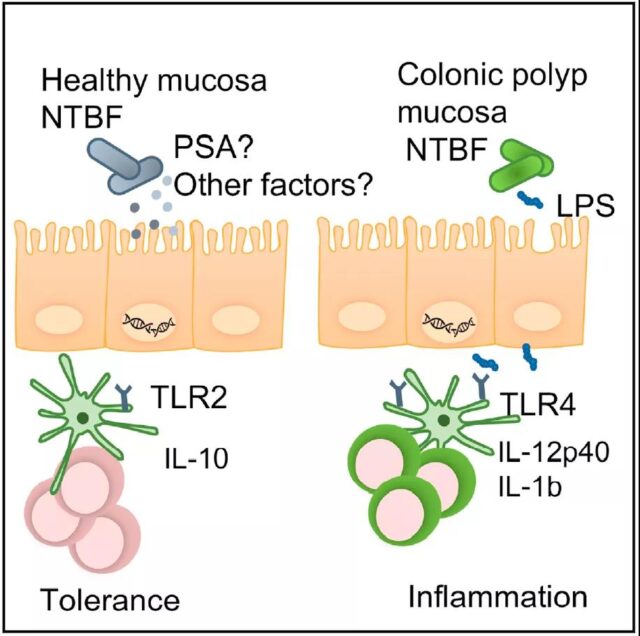 The research team recruited 40 patients undergoing routine colonoscopy. The patients are between 50 and 75 years old, and two-thirds of them are women. Histological analysis of biopsy polyps showed that 51% of patients had tubular adenomatous polyps (TAP), 23% had sessile serrated polyps (SSP), 13% had benign hyperplastic polyps (HP), and the remaining 13% had no lesions and were used as healthy controls.

Intestinal inflammation is related to changes in the composition of the intestinal microbiota. Therefore, the research team used 16S rRNA sequencing to analyze the mucosal microbiota of the proximal colon of some patients to see if this could explain the phenotypic differences observed in host tissues. As expected, they found that the composition of the microbiota associated with polyps is different from that of healthy tissues. Among them, the TAP tissue mainly contains Bacteroides, the SSP tissue is mainly Proteobacteria, and the healthy control biopsy mainly contains Firmicutes.

Since there is very little research on the polyp microbiome, culturomics combining bacterial culture with matrix-assisted laser desorption/ionization time-of-flight mass spectrometry (MALDI TOF MS) allowed them to evaluate and compare the composition and function of bacteria between groups. When compared with the bacteria identified by 16S sequencing, they found that cultureomics analyzed more Bacteroides. These bacteria were mainly from the tissues of TAP patients, then SSP, and finally healthy controls. The analysis of Bacteroides showed that more than 80% and 60% of Bacteroides were Bacteroides fragilis from TAP or SSP, respectively, and there were less than 20% Bacteroides fragilis in healthy controls.

They also carry adhesin that can improve the adhesion of the intestinal mucosa, as well as various antibiotics. The presence of resistance genes (cepA, tetQ and ermF) can make Bacteroides fragilis resistant to antibiotic elimination.

In addition to the polysaccharides and lipoproteins that can be detected by TLR2, Bacteroides fragilis also produces a unique LPS that has been shown to bind weakly to TLR4. Cells transfected with TLR4/MD2 and NF-κB-dependent firefly luciferase reporter gene, compared with bacterial isolates from healthy control patients, Bacteroides fragilis from polyp patients can significantly activate TLR4 to a greater extent . The proteomic differences explain the different stimuli of TLR4 and lead to the pro-inflammatory phenotypes of TAP and SSP Bacteroides fragilis. Compared with PF isolates, polyp patient isolates were significantly enriched in genes encoding glycosyltransferases involved in LPS biosynthesis. Studies have reported that TLR4 recognizes LPS as a microbial ligand and that LPS can signal through TLR4 to induce IL-12p40 and IL-1β. The difference in LPS biosynthesis probably explains the phenotype observed between Bacteroides fragilis isolates difference. In addition, compared with healthy control mucosal tissues, LPS staining was stronger in TAP and SSP tissue sections.

In summary, this work shows that the microenvironment of precancerous colon polyps is rich in Bacteroides fragilis that stimulate TLR4 but not TLR2, leading to the induction of pro-inflammatory cytokines. In the early stages of polyp formation, the inflamed gut microenvironment allows colonization of Bacteroides fragilis rich in LPS biosynthesis genes. These bacteria activate NF-kB through TLR4 and induce inflammation, which directly promotes the growth of colon tumors. The findings of this study provide basic insights into the underlying mechanism of the microbiota’s ability to induce colorectal cancer, and take a step forward in discovering potential microbiota-based colorectal cancer diagnosis and treatment targets.