Type 1 diabetes ( T1D ) is a complex T cell-mediated autoimmune disease that results in the destruction of insulin-producing beta cells and insufficient insulin secretion.

Before the discovery of insulin in 1921, T1D patients would die within a year or two of diagnosis; however, since the discovery and mass production of insulin, T1D is no longer a terminal illness, however, over time, many patients remain Complications can occur, including cardiovascular disease, retinopathy, neuropathy, and kidney disease.

T1D goes through several stages from onset to clinical diagnosis. In fact, before the diagnosis of T1D, the immune response has been triggered, and by the time of diagnosis, a large number of beta cells have been destroyed by islet self-antigen-specific T cells.

However, in the stages before diagnosis, the patient’s body responds positively to islet antigens. This provides a window of opportunity to potentially intervene and reset the immune system before extensive tissue damage. 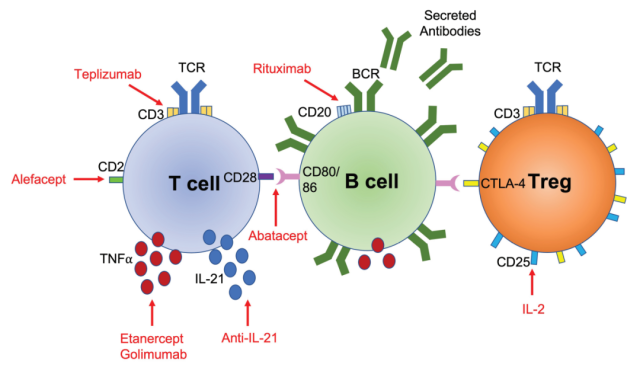 Based on successful experiments in a T1D rat model, early attempts at immunomodulation included the use of the calcineurin inhibitor cyclosporine.

Of the 30 patients treated within 6 weeks of diagnosis, 16 returned to normal C-peptide levels and became insulin-independent, an unprecedented result.

The use of corticosteroids plus daily azathioprine has also shown beneficial results in new-onset T1D, and although these approaches have not been employed due to side effects, these trials remain important in demonstrating the potential for immunomodulation in T1D. 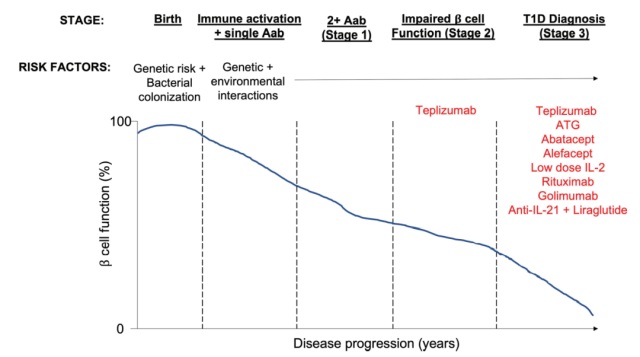 Since then, multiple immunotherapy studies have aimed to reduce beta cell loss by targeting key immune cells involved in the disease process and the cytokines they produce.

A number of successful non-antigen-specific immunotherapies have shown promising promise in preserving beta-cell function and even delaying the development of T1D.

T cells infiltrate the pancreatic islets of diabetic patients, and in a mouse model, diabetes can be transferred from one animal to another by adoptive transfer of T cells.

In 1979, Orthoclone ( OKT3 ) was developed to target the epsilon chain of the CD3 receptor. In 1981, the first patients took OKT3, which was shown to successfully reverse allograft rejection.

In 1985, OKT3 began commercialization for transplantation, making it the first approved monoclonal antibody.

However, the clinical application of OKT3 is limited due to side effects. Teplizumab is a modified OKT3 antibody that shares the same binding region as OKT3 but removes the ADCC function.

Preclinical studies have shown that short-term anti-CD3 treatment is able to induce remission in up to 80% of newly diagnosed diabetic non-obese diabetic ( NOD ) mice, which is associated with transient and partial T cell depletion.

Given the success of preclinical studies of anti-CD3 therapy in NOD mice, Teplizumab was clinically studied in 24 newly diagnosed T1D patients, and after 12 months of treatment, two-thirds of the Teplizumab-treated groups had comparable C-peptide responses At or above the start of the study, C-peptide responses declined in 10 of the 12 control group participants.

Furthermore, the fact that islet autoantibodies are produced many years before the onset of diabetes provides an opportunity for therapeutic intervention.

People began to take advantage of this window by administering Teplizumab to high-risk individuals with dysglycemia and 2 or more islet autoantibodies who had not yet been diagnosed with T1D, and this study successfully delayed T1D development in these individuals, compared with placebo.

These data change the landscape of T1D immunotherapy, providing the first evidence that the use of T-cell-directed therapy in high-risk populations can alter the course of the disease in the future.

However, the FDA rejected a July 2021 request for approval of teplizumab due to insufficient data accumulation. However, the momentum for immunotherapy approval in the T1D setting is clearly gaining momentum, and Teplizumab remains in the lead.

This failure was associated with a decrease in the ratio of Tregs to T-effector memory cells between baseline and 6 months in ATG-treated individuals.

A subsequent trial in 25 T1D patients used lower doses of ATG in combination with granulocyte colony-stimulating factor ( GCSF ) treatment, which appeared to protect beta cells, and subjects who received placebo were treated with C-peptide decreased by 39% during the year, while subjects receiving ATG/GCSF increased C-peptide by 4.3% over the same time period.

Therefore, low-dose ATG remains an interesting candidate. Notably, an attempt to compare beta-cell protective interventions in multiple clinical trials found that low-dose ATG and anti-CD3 immunotherapy were the treatments with the greatest impact on C-peptide protection.

Another example of T cell-directed immunotherapy is the CTLA-4-Ig fusion protein Abatacept. CTLA-4 is naturally expressed at high levels in regulatory T cells, and it interacts with the same ligands as the T cell co-stimulatory receptor CD28, but binds them with higher affinity.

In a clinical trial of 112 patients with confirmed T1D, Abatacept was able to slow the decline in beta-cell destruction and function for an estimated 9.6 months, compared with placebo, and 1 year after treatment was discontinued, the treatment group remained observable to higher C-peptide levels.

This protective effect was associated with a decrease in CD4+ central memory T and B cell populations and an increase in Treg and naive CD4+ T cells.

Based on emerging T1D studies, Abatacept is currently being tested in T1D-risk populations ( NCT01773707 ).

Alefacept is another Ig fusion protein that contains two LFA-3 molecules that bind to the Fc portion of human IgG1.

It binds to CD2 and mediates the depletion of antigen-experienced effector/memory T cells.

In the T1DAL study, 33 T1D patients received two courses of Alefacept for 12 weeks and 16 received placebo.

Another immunotherapeutic approach targeting T cells is to selectively expand Tregs using the cytokine IL-2. The role of IL-2 in immune regulation suggests that defects in IL-2 or genes involved in IL-2 signaling are associated with autoimmune diseases, including T1D .

The use of IL-2 to suppress immune responses is a remarkable example of the same drug being used at different doses for opposite purposes, as high doses of IL-2 are used to promote antitumor responses in cancer patients.

However, a phase I study of IL-2 in combination with rapamycin in humans gave disappointing results: despite increased Treg frequency, C-peptide was temporarily decreased, which was correlated with increases in NK cells and eosinophils Consistent.

In light of this, the field has moved in two directions: one involving sophisticated dosing regimens to determine activation of Tregs without activating effector cells; the other involving the production of mutant IL-2 designed to avoid NK cells, eosinophils Detrimental activation of granulocytes and effector T cells.

Targeting B cells in T1D

Rituximab binds to CD20 expressed on the surface of B cells, leading to its destruction through antibody-dependent cell-mediated cytotoxicity, apoptosis, and complement-dependent cytotoxicity.

Rituximab is effective against many different autoimmune diseases, including systemic lupus erythematosus and rheumatoid arthritis.

Rituximab was tested in patients with recent-onset T1D. Forty-nine received rituximab and 29 received placebo. The primary outcome measure was stimulated C-peptide levels in the MMTT 1 year after the first infusion.

IL-1β secretion increases with the progression of diabetes and islet β-cell destruction; however, two randomized, double-blind, placebo-controlled trials of either Canakinumab ( a human anti-IL-1 monoclonal antibody ) or Anakinra ( a human IL-1 receptor antagonists ), did not show any protective effect.

This is consistent with data from studies in IL-1 receptor- or IL-1β-deficient NOD mice, in which no protection against diabetes development was observed.

Similarly, blocking IL-6Ra did not appear to confer benefit in a recent trial of newly diagnosed T1D patients.

TNF-α has been a target of interest in T1D for some time. Studies in NOD mice have yielded mixed results, suggesting that TNFα exerts site-specific, cell-type-specific, and age-dependent effects.

Injection of anti-TNF-α antibodies into neonatal mice significantly inhibited the development of diabetes, however, if treatment was initiated in adult mice, protection was attenuated, and administration of TNF-α itself exacerbated disease in neonatal mice, but not in neonatal mice. In adult mice, disease onset was conversely delayed.

In this phase II randomized, double-blind, placebo-controlled study, after 52 weeks of dosing, there was a significant increase in C-peptide and a significant decrease in insulin use in the treatment group.

IL-21 also has some appeal as a target for T1D immunotherapy. IL-21 is a characteristic cytokine produced by follicular helper T cells ( Tfh cells ), which helps in the production of B-cell antibodies and thus plays an important role in humoral immunity.

NOD mice lacking IL-21 or the IL-21 receptor were prevented from developing diabetes, whereas transgenic expression of IL-21 in pancreatic islets was sufficient to induce diabetes in non-autoimmune susceptible mice.

Probiotics, a type of bacteria with potential health benefits, have also been extensively studied for their role in modulating T1D susceptibility. L. johnsonii N6.2 was shown to be safe and induce tolerogenic immune responses in a double-blind randomized trial in healthy adults. Studies are currently underway in children, adolescents and adults with T1D to determine safety, tolerability and efficacy ( NCT03961854 and NCT03961347 ).

Currently, the field of microbe-derived therapies for T1D is still in the early stages of development, and more work is needed to determine whether it can be harnessed to modulate immune responses and provide long-term clinical benefit.

In the 100 years since insulin was discovered, there is still no cure for T1D.

However, the promise of immunotherapy is gradually starting to materialize, with early signs of progress in both preventive and emerging disease settings.

A key challenge moving forward is to discern which interventions are best for which disease stage, so a better understanding of the type of disease associated with age at diagnosis will ultimately inform the stratification of individuals for different treatment options.

The use of biomarkers such as Tfh, or Treg and soluble IL-2R to eliminate heterogeneity in clinical response will also be key.

As effective immunotherapies gradually begin to emerge, it is important to establish mechanisms by which more people can choose to participate in clinical trials for T1D diagnosis so that candidate interventions can be compared.

Combined with large-scale initiatives to identify at-risk groups, a new landscape for T1D treatment and prevention is beginning to take shape.