Cancer cells have learned to “poison”! Scientists discover for the first time that melanoma cells secrete Alzheimer’s disease “toxic protein”, which enables astrocytes to promote cancer metastasis and inhibit the phagocytosis of microglia

Metastasis is one of the main causes of death in cancer patients [1]. Different tumors have different metastatic preferences, and 40-75% of patients with stage IV melanoma will develop brain metastases [2,3] .

They found that in order to survive, melanoma cells entering the brain secrete beta-amyloid (Aβ) proteins that recruit and promote the transformation of astrocytes into a cancer-promoting phenotype, while also preventing microglia. Phagocytosis of melanoma cells .

Let the “number one suspect” of causing Alzheimer’s disease serve his transfer, the melanoma is really a trick!

However, melanoma cells may not have thought that the Aβ inhibitor that has been used in clinical research is waiting for it! Hernando’s team found that BACE inhibitors that inhibit Aβ protein secretion can reduce melanoma brain metastases . 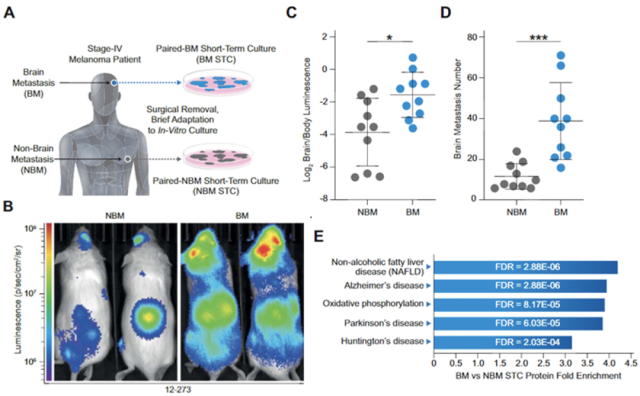 Further investigation of differentially expressed proteins by Hernando’s team found that tumor cells in brain metastases highly expressed a variety of enzymes that cleave amyloid precursor protein (APP) , such as α-secretase (BACE2) and the catalytic subunit of α-secretase complex. basal (PSEN1); while enzymes associated with reducing Aβ production , such as the ubiquitin ligase UCHL1 and ADAM19, were significantly reduced . 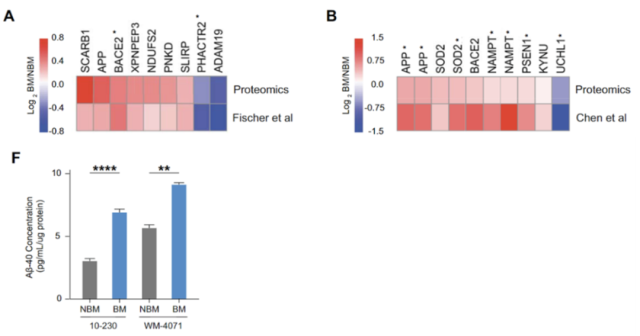 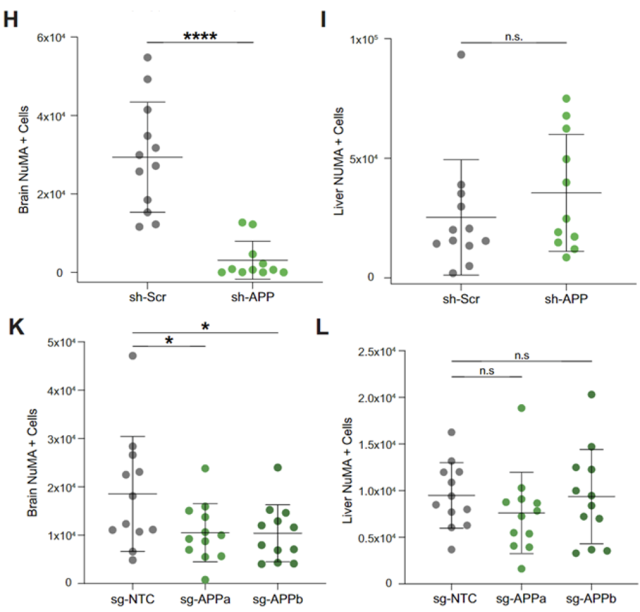 ▲ After knocking down APP, the tumor’s brain metastases significantly decreased

As we all know, APP is the precursor of Aβ, and it has various processing forms, so which form does APP play a role in? Combining the aforementioned findings, Hernando’s team hypothesized that Aβ is the form in which APP functions.

In order to test this conjecture, they conducted backfilling experiments. A mutant APP gene—SPA4CT-T43P—was introduced into melanoma cells in which the APP gene had been knocked out—the mutant gene expressed mainly Aβ, rather than other processed forms of APP. The results showed that both the wild-type APP gene and the mutant APP gene could restore the brain metastatic ability of melanoma cells . This suggests that Aβ is the form of APP required for melanoma brain metastases . 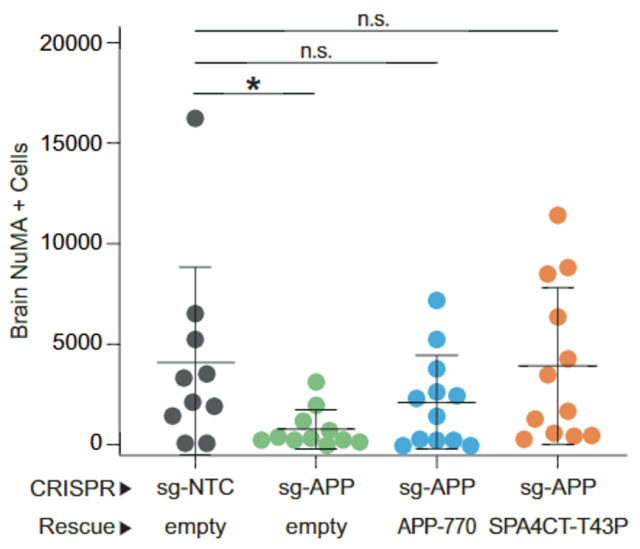 The experimental results showed that knockdown of APP had no effect on tumor cells stasis, extravasation and growth in blood vessels, but tumor cells lacking APP could not establish metastases in the brain parenchyma, but underwent apoptosis . These data suggest that melanoma cells require Aβ to help colonize the brain parenchyma. 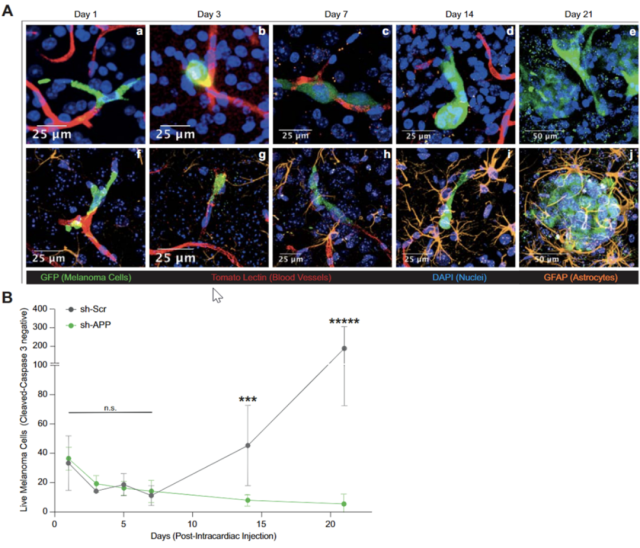 Why does Aβ have the ability to help melanoma cells colonize the brain? Existing studies have shown that astrocytes are an important regulator of tumor brain metastasis, and Aβ has a significant impact on astrocyte function [9-11]. The Hernando team therefore hypothesized that Aβ promotes tumor cell colonization by affecting the function of astrocytes.

They found from immunofluorescence results that astrocytes around tumor cells lacking APP were significantly reduced. This indicates that Aβ secreted by tumor cells can promote the increase of local astrocytes in the tumor .

Using immunofluorescence, confocal microscopy, and three-dimensional imaging, Hernando’s team validated the sequencing results and found that the complement C3 protein, which is highly expressed in inflammatory astrocytes (A1), was reduced in the presence of Aβ. These data suggest that Aβ inhibits inflammatory A1 polarization of astrocytes and promotes tumor immune escape .

They observed the phenotype of melanoma-associated microglia (Iba1 + ) by immunofluorescence, confocal microscopy, and three-dimensional imaging, and found that in the presence of Aβ, microglia expressed more anti-inflammatory mediator Arg -1, while the expression of phagocytic function marker CD68 was significantly decreased .

These data suggest that Aβ can promote the anti-inflammatory phenotype polarization of microglia and protect melanoma cells from phagocytosis by microglia.

▲ In the presence of Aβ, microglia highly express the anti-inflammatory mediator Arg-1, and the phagocytic function decreases 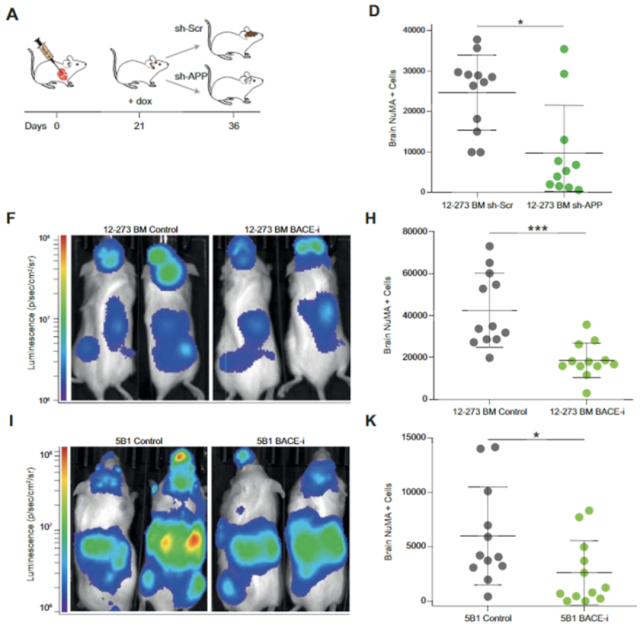 In the past few decades, scientists have developed numerous Aβ-clearing drugs, which can effectively clear Aβ in the brain. Although they have failed in preventing Alzheimer’s disease progression, they may be used in the future of tumor therapy. Battlefield comes into play.