Science Sub-Journal: Subversion of the understanding of the development process of Alzheimer’s disease, toxic proteins continue to replicate

In Alzheimer’s disease, tau protein and beta amyloid (Aβ) form tangles and plaques, which lead to brain cell death and brain atrophy, which can lead to memory loss, personality changes, and inability to take care of themselves. Approximately 44 million people worldwide are affected by Alzheimer’s disease, and as the global ageing intensifies, Alzheimer’s disease will also increase.

For many years, people have used terms such as “cascade” and “chain reaction” to describe the processes that lead to Alzheimer’s disease in the brain. Alzheimer’s disease is a disease that is difficult to study. The final diagnosis can only be made after examining the brain tissue samples after death, and animal models cannot reproduce tau protein and beta amyloid (Aβ) well. The rate of aggregation, which makes research progress very slow.

By combining five different data sets and applying them to the same mathematical model, the research team observed that most of the tau proteins in the later period of Braak are located in the entorhinal cortex, hippocampus and posterior hippocampal gyrus. In the early stages, tau appears to be limited to the entorhinal cortex and hippocampus, while the concentration in all other areas is relatively low.

After Braak 3, the distribution of tau protein changes more rapidly over time. It is worth noting that beta amyloid deposits in the neocortex and the appearance of disease symptoms often only occur in the later stage of Braak. Therefore, the research team focused on the stage where the disease progresses faster, which is Braak stage 3. 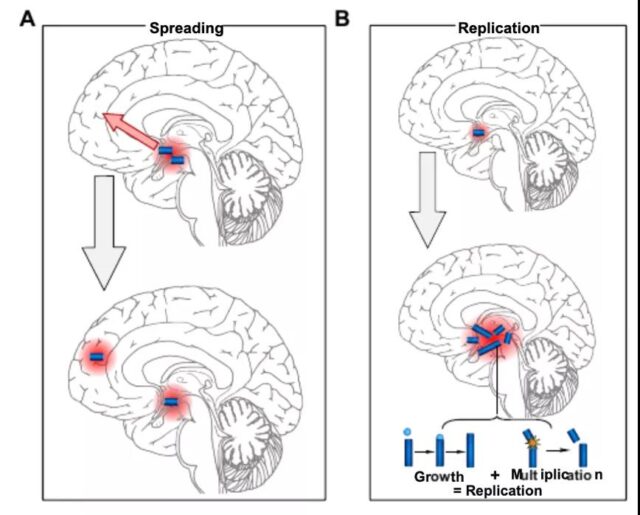 This means that after Braak 3, the overall rate of tau protein accumulation is determined by the rate of replication, and inhibition of replication will slow down the entire process to the greatest extent.

In order to quantify the aggregated tau protein, the research team used a variety of analysis methods: automatic image analysis of immunohistochemical slices; enzyme-linked immunosorbent assay; stereology technology; longitudinal tau-PET, which identified tau in Alzheimer’s disease The doubling time of protein is about 5 years, and it is expected to increase by about 100 to 1000 times within a few decades of the disease. This means that in Braak 3, there are already many aggregates widely distributed in the brain.

In summary, by applying chemical kinetics to human data, the study found that starting from Braak Phase 3, local replication, rather than spreading between brain regions, is the main factor controlling the total accumulation rate of tau protein in the neocortex.

The amount of tau protein only doubles every 5 years. Therefore, limiting local replication may be the most promising strategy to control the accumulation of tau protein during Alzheimer’s disease.