Meditation (also known as mindfulness meditation)is a method of mental “exercise” that has been around for thousands of years. But it only became popular in the West in the 1970s.

Public interest in meditation has skyrocketed in recent decades, as it has become a popular way to help people improve sleep, manage their concentration, reduce stress, and improve overall well-being.

Since then, a growing body of research has demonstrated that meditation not only alters brain physiology and gene expression, but also has beneficial effects on both physical and psychological disorders, including irritable bowel syndrome, fibromyalgia, psoriasis, anxiety, depression and post-traumatic stress disorder.

However, how meditation affects biological processes directly related to disease pathogenesis has not been comprehensively studied.

Recently, researchers from the University of Florida and other institutions published a research paper in the Proceedings of the National Academy of Sciences ( PNAS) entitled: Large-scale genomic study reveals robust activation of the immune system following advanced Inner Engineering meditation retreat .

The study found that meditation practice boosted immune function without activating inflammatory signals . This conclusion suggests that meditation can be an effective drug-free behavioral intervention for various conditions associated with a weakened immune system.

Before starting the study, neuroscientist Vijayendran Chandran of the University of Florida School of Medicine had completed his own 48-day meditation program, in which he practiced meditation at home for about 20 minutes a day.

Despite only practicing for 20 minutes a day, 48 days of meditation made him feel clearer and more focused. All in all, it feels great. So he decided to delve deeper into the exact molecular mechanisms underlying the health benefits of meditation.

For the study, researchers recruited 104 male and female volunteers, with an average age of 40, to participate in an advanced eight-day meditation retreat at a scientific institute in Tennessee. 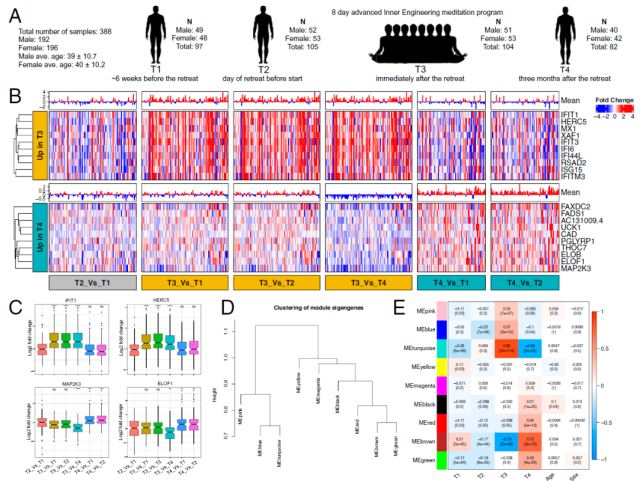 During the 8-day meditation retreat, all participants consumed a vegan diet, and each followed a regular sleep schedule. Meditation takes place in silence for 10 hours a day.

Three months after the meditation ended, the researchers found that the participants’ responses to oxidative stress, detoxification, and cell cycle regulatory pathways were downregulated.

Through gene co-expression network analysis, they found that up- and down-regulated genes were significantly associated with meditation. 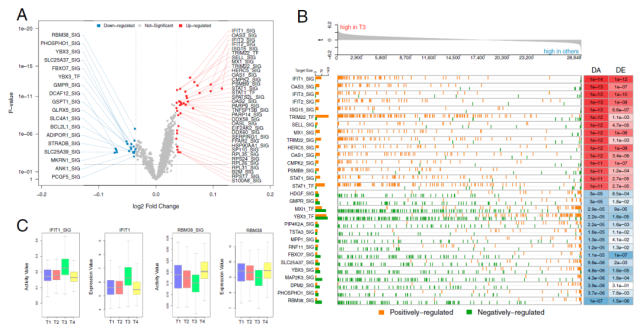 It is well known that interferon signaling plays a key role in immune function by triggering a complex regulatory system of innate and adaptive immune responses to defend against pathogens and diseases. 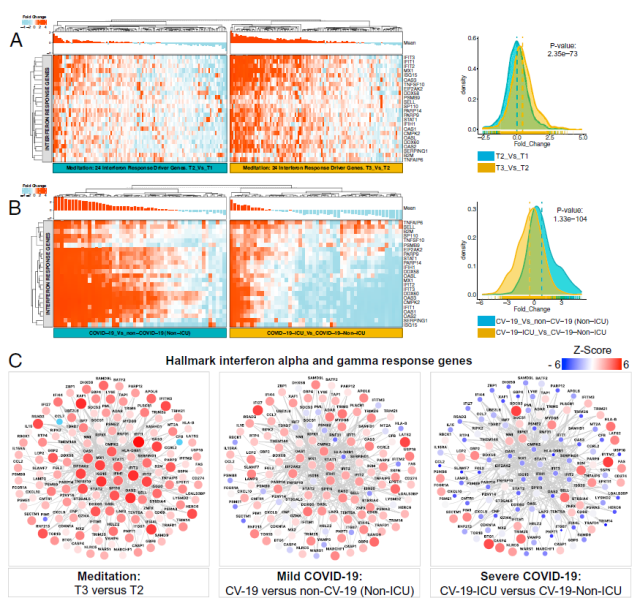 Given that interferon effectively acts as a trigger for the immune system, the researchers believe that this signaling may be the key to building effective defenses against a variety of health conditions , including cancer, multiple sclerosis, and even COVID -19.

Almost all (97%) of the interferon “response genes” were activated after meditation, and according to publicly available gene activity data from patients with Covid-19, this figure was 76% in mild patients and only 31 in severe patients %.

They also found that while the activity of inflammatory signaling genes remained stable after deep meditation, the signaling was significantly enhanced in severely ill patients with COVID-19.

The researchers noted that the apparent effect of meditation on the participants’ gene activity remained even after accounting for eating and sleep patterns.

Many previous studies have explored the positive links meditation has on mental and physical health.

This study greatly contributes to the literature in this field by identifying the underlying mechanisms by which meditation has protective effects on health.

This study cannot assert that the average person meditating at home will fully experience the ‘immunity boost’ seen in this study.

However, given the large body of evidence that meditation practice improves well-being, it is likely that at-home meditation will also experience some benefit.

In conclusion, this study provides a molecular basis for understanding the healing function of meditation and shows that meditation as a non-pharmacological means of behavioral intervention can effectively improve immune responses to treat a variety of disorders related to immune system disorders.