PNAS: Eczema may be related to abnormal secretion of your sex hormones

PNAS: Eczema may be related to abnormal secretion of sex hormones

Eczema is clinically called atopic dermatitis (AD). It is a recurrent chronic inflammatory skin disease that affects 13% of adults and 10% of children worldwide. The clinical features of eczema are repeated intense itching and defects in the epidermal barrier. Therefore, it has a serious impact on the quality of life of patients, especially in the dry season.

On September 21, 2021, researchers from the University of Texas Southwestern Medical Center published a titled Interleukins 4 and 13 drive lipid abnormalities in skin cells through regulation of sex in the Proceedings of the National Academy of Sciences (PNAS). Research paper on steroid hormone synthesis.

The study found that eczema may be caused by a disorder of sex hormone regulation. The results of this study provide an unexpected new target for combating the persistent disease of eczema.

Generally, eczema is considered to be a skin disease caused by dry skin, so moisturizers are used clinically to treat mild eczema. In this new study, the researchers discovered that a gene that plays an important role in the production of sex hormones also seems to play a role in the moisturizer the skin makes for itself. Therefore, if the activity of this gene can be changed, it may help the skin to secrete more moisturizers (oils and lipids). Once the skin remains moisturized, it can relieve the symptoms of eczema.

Previous studies have found that one of the main features of eczema is that the immune cytokines interleukin 4 and 13 (IL-4 and IL-13) are significantly elevated. IL-4 and IL-13 can cause damage to the skin barrier and abnormal lipid secretion in patients with eczema, but the underlying mechanism remains unclear to researchers.

To study this problem, the researchers focused on the sebaceous glands. Sebaceous glands are epithelial cells that produce sebum, and promote skin barrier function by releasing lipids and antibacterial proteins to the skin surface.

The researchers injected IL-4 and IL-13 into human sebaceous cells grown in petri dishes, and then used RNA sequencing to read the gene activity of the entire genome and compare them with sebocytes that had not been treated with these immune molecules. Compare.

They found that IL-4 and IL-13 stimulate the expression of 3β-hydroxysteroid dehydrogenase 1 (HSD3B1), a key rate-limiting enzyme for sex hormone synthesis, mainly expressed by the sebaceous glands of human skin. HSD3B1 enhances the production of male hormones in sebocytes, while IL-4 and IL-13 drive lipid abnormalities in human sebocytes and keratinocytes through HSD3B1. 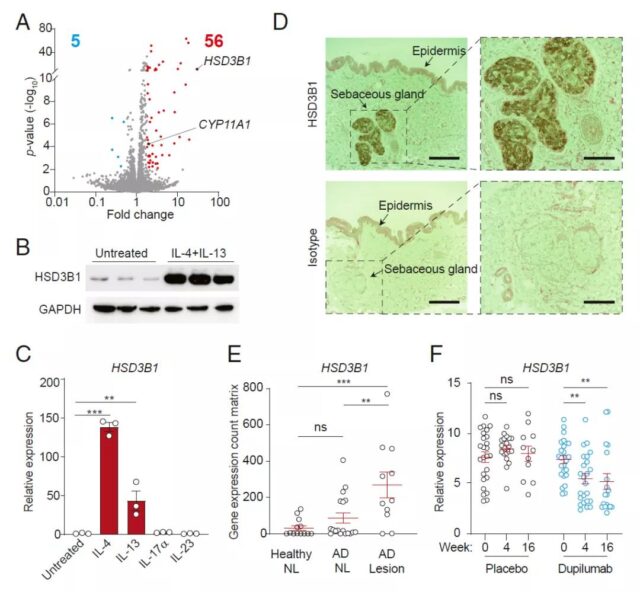 Subsequently, the researchers found that the expression of HSD3B1 in the skin of patients with eczema was significantly up-regulated, consistent with the situation found in the cells.