PNAS: Why are the older people more likely to get cancer? This mysterious gene may be the “perpetrator”

As people grow older, people will gradually become older, and the risk of being threatened by diseases including cancer will increase accordingly. Although it has been known that this phenomenon is related to the aging of the basic unit cells that constitute the structure and function of the human body, the specific mechanism of disease caused by aging is still unknown.

Recently, researchers from the Japan Cancer Research and Genetics Association published a research report titled Pericentromeric noncoding RNA changes DNA binding of CTCF and inflammatory gene expression in senescence and cancer in the Proceedings of the National Academy of Sciences (PNAS), revealing To understand how aging promotes cancer. 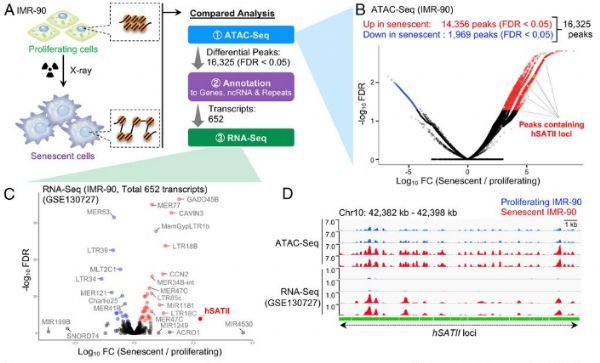 The report pointed out that a previously under-understood non-coding RNA (ncRNA) around the centromere of cell chromosomes may be the “main cause” of cancer with age, and this type of RNA can promote the senescence-related secretory phenotype (SASP) The expression of such pro-inflammatory proteins promotes the occurrence of diseases. This will provide new ideas for controlling “old age” diseases and helping people to better enjoy the life of old age.

In order to find out the connection between cellular senescence and disease, the researchers first compared the difference in gene expression between human embryonic lung fibroblasts (IMR-90) under normal proliferation and X-ray-induced senescence. Transposition Enzyme Accessible Chromatin Sequencing (ATAC-seq) showed that the peak intensity of a total of 16,325 points changed significantly.

By integrating these data with published data, the researchers “smelt” something unusual. A type of ncRNA called “Human Satellite II” in the centromeric part of the cell chromosome exhibits genetic silencing in normal cells. , But remain open in senescent cells. If hSATII RNA is overexpressed in cells, it will induce SASP-like inflammatory gene expression. This indicates that hSATII RNA may be the key to regulating SASP.

Cell senescence can cause significant changes in its chromatin organization, and this process is participated by CCCTC-binding factor (CTCF). CTCF is a multifunctional transcription factor widely present in eukaryotes. It can enter the nucleus through the nuclear pore complex, thereby performing multiple functions including promoter activation and inhibition, gene silencing and insulation, cell growth and differentiation regulation, and tumorigenesis. Since CTCF is so powerful, does it participate in the regulation process of hSATII RNA on SASP?

Previous studies have shown that human satellite RNA may induce chromosomal instability (CIN), which is a risk factor for the occurrence and development of cancer. Therefore, in further analysis, the researchers explored whether the interference of hSATII RNA on CTCF function can induce CIN, and found that cells with hSATII RNA overexpression showed obvious CIN characteristics and tumor cell phenotypes, while CTCF overexpression eliminated The CIN induced by hSATII RNA indicates that hSATII may promote the occurrence of cancer as cells age.

In addition, the researchers also found that hSATII RNA in senescent cells can be transferred to surrounding normal cells through extracellular vesicles (EV), thereby promoting the expression of SASP-like inflammatory genes in other cells and the occurrence of CIN.

In summary, this report highlights the role of hSATII RNA near the centromere in the occurrence and development of cancer with aging. It can promote tumor development by regulating SASP-like inflammatory factors and EVs metastasis. This will bring new prevention and treatment strategies to fight age-related diseases in the future