Laser plasma accelerators are a promising source of protons that can achieve ultra-high proton dose rates thought to produce the FLASH effect.

On March 14, 2022, researchers from the Helmholtz-Dresden-Rosendorf Research Center in Germany published a paper entitled: Tumour irradiation in mice with a laser-accelerated proton beam in Nature Physics , a sub-journal of Nature . Research Papers.

This pilot study reports the results of irradiating mouse tumors with protons generated by a stable, compact laser plasma accelerator . The findings demonstrate that the technique could be used in research with the goal of improving cancer radiation therapy. 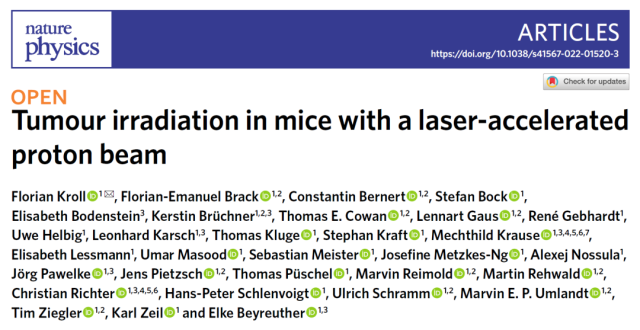 The research team demonstrated that the accelerator can be used directly for radiobiological research, including studying the effectiveness of a uniform dose in slowing the growth of human tumors (head and neck squamous cell carcinoma) in the ears of mice. The authors used a sample size of 92 mice.

The inherently high dose rates of laser plasma accelerators demonstrate their potential value for studying the mechanisms behind the FLASH effect , according to a “News and Views” article in the journal Nature Physics , titled: Ready for translational research . The paper also points out that this is a promising step for further use of protons for ultra-high dose rate irradiation in translational research in the future.