It’s about the top priority! No ambiguity! Proton therapy accurately blasts cancer cells and declares war on skull base tumors

Dusty Bailey has been in education for 16 years and has been a middle school librarian for 8 years. In addition to teaching children how to learn, he is also familiar with how to search for information on the Internet.

Unfortunately, after her husband Mark was diagnosed with a rare skull base tumor (namely clavicle chordoma) in 2018, she began to constantly inquire about the professional knowledge of related tumors on the Internet.

Any experts and doctors she and her husband saw in Alabama at the time could not tell what the tumor was, let alone how to treat it.

They determined that Mark’s tumor was incurable, and believed that it could not be removed by surgery, and recommended that he go home to recuperate, because no matter what he does, it may make his condition worse.

At that time, their son was only three years old and worried that his son would not be accompanied by his father in the future.

So Bailey began to inquire about relevant information on the Internet, until he learned of MD Anderson’s excellent medical team, he met with neurosurgeon Dr. Shaan Raza.

After completing the examination, he said: “You are the patient I have seen for the second time this week. Although the tumor is rare, there is a cure.”

Dr. Raza said that Mark’s tumor was chordoma of the clavicle. He said it would take 10 hours of surgery to remove it from the base of the skull, and then he would need to undergo proton therapy for 8 weeks accompanied by Dr. David Grosshans.

Mark completed all cancer treatments on February 28, 2019 and has not shown any signs of disease since then. You only need to go back and check your body every 4 months.

Skull base tumors near the base of the skull are very tricky, Proton therapy is the good choice!

The chordoma of the clavicle that Mark mentioned above is a type of skull base tumor, including chordoma and chondrosarcoma.

Tumors in the skull base area are difficult to treat because they are usually close to key structures such as the brain stem, spinal cord, cranial nerves, and optic nerves.

The location of these tumors often makes surgical resection difficult and limits the radiation dose that can be provided by standard X-rays.

Proton therapy may be particularly suitable for these tumors because it can minimize radiation exposure to surrounding healthy tissue. 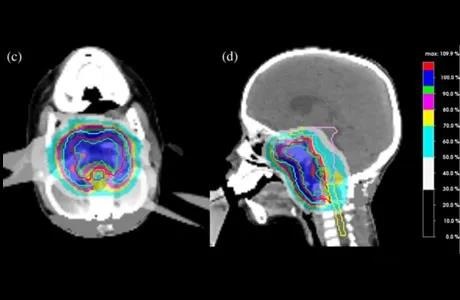 The higher precision of proton therapy keeps healthy organs unaffected, allowing higher doses of radiation to be delivered to skull base tumors. The higher the dose, the better the tumor control.

When the proton beam enters the human body at high energy and high speed, the penetrating power is strong, and the energy can be freely controlled and adjusted to make the beam reach any depth of human tissue.

For tumors surrounded by important tissues and organs, other treatment methods are helpless, and proton therapy has shown its great superiority.

In addition to spinal cord tumors, another type of skull base tumor is chondrosarcoma. This is a rare malignant tumor that usually originates from the bones.

They are a variety of tumors defined by transformed cells that form the cartilage matrix.

Although generally slow growing, these extraaxial tumors are associated with high morbidity due to their location and local aggressiveness.

If there is no effective treatment, the progressive tumor enlargement can cause compression or invasion of local structures, including the cranial nerve, brainstem, and optic nerve pathways. Patients usually experience headaches and diplopia (both eyes).

High-resolution MR imaging showed that the skull invaded the skull, involved the clavicle and the left cavernous sinus, suggesting chondrosarcoma. The patient underwent surgical resection and pathologically confirmed that it was a primary chondrosarcoma.

Given the key location, the overall favorable outcome and the high radiation dose necessary for the treatment of skull chondrosarcoma, every effort will be made to reduce the radiation dose to nearby critical structures (including brain stem and optic nerve pathways).

Assess the benefits of proton therapy

A team of clinicians, physicists, and radiation dosimeters made careful comparison plans for proton and photon radiation therapy.

In the current situation, proton therapy can achieve better tumor coverage, about 99% (the prescribed dose is 72 Gy), while photon therapy is 91%.

In contrast, the maximum dose of proton therapy to the brainstem is 57 Gy, and the photon therapy plan is 63 Gy. The average brainstem dose achieved by the proton program is 4.8 Gy, which is significantly lower than the 24 Gy of photon therapy. 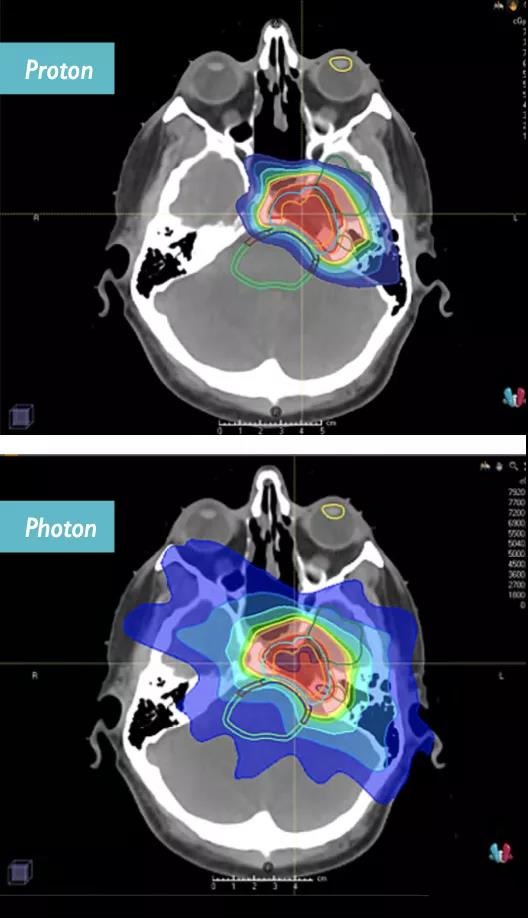 The patient received a bioequivalent dose of 72 Gy of 40 proton radiotherapy fractions within 8 weeks. No additional systemic treatment was given.

The patient is well tolerated and has limited toxicity and is currently undergoing routine follow-up.

Although the current cost of proton therapy is relatively high, with the popularization of technology, it is believed that this new technology will gradually decrease and benefit the public.

In the field of proton heavy ion therapy, the most developed countries in the world are Germany, Japan, the United States and other countries.

In addition, patients should be reminded that in the era of precision medicine, cancer treatment should undoubtedly be more personalized and not limited to only one therapy or one technology.

Proton therapy cannot “cover all diseases”, but is one of the options for comprehensive cancer treatment. The comprehensive treatment of patients with surgery, drug therapy, radiotherapy and other methods is the guarantee for patients to obtain a better prognosis.