People usually divide tumors into many types according to their anatomical locations, such as lung cancer and liver cancer. Tumors at different locations have many pathological and molecular subtypes, so it can be said to be quite complicated. However, there is one type of cancer that has a very special name, and we collectively refer to it as head and neck tumors.

Head and neck tumors are more complicated, radiotherapy is the first choice

Malignant tumors of the head and neck account for about 30% of all malignant tumors in the whole body. The incidence rate among Chinese men is 6th, and the mortality rate is 7th. The most common pathological type is squamous cell carcinoma. In addition to nasopharyngeal carcinoma, which is mainly caused by the Epstein-Barr virus, tobacco and alcohol are the main causes of other head and neck squamous cell carcinomas.

Because many important organs are concentrated in the head and neck, which control important physiological functions, such as vision, hearing, smell, thinking, breathing, sound, and eating, there are more muscles, bones, blood vessels and more concentrated in a relatively small space. Nerves and various organs are interlaced. Once a tumor is found, it is difficult to achieve radical resection. Therefore, radiotherapy has become a very important means of comprehensive treatment of head and neck tumors.

The NCCN Clinical Practice Guidelines for Head and Neck Cancer (2021.V1) was updated and released on November 9, 2020. The latest version of the guidelines regards proton therapy as one of the standard treatments for head and neck cancer. 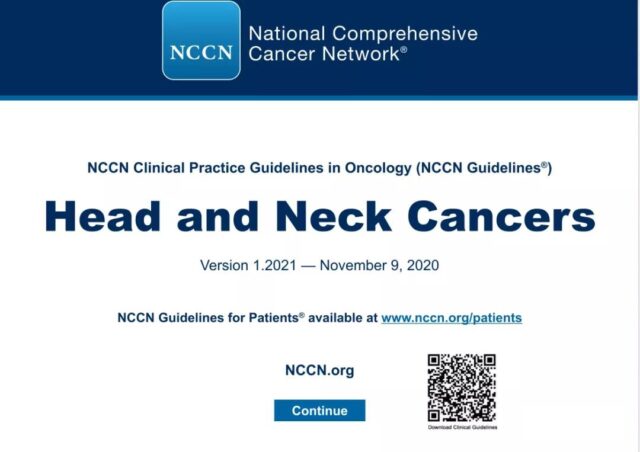 The guidelines point out that proton therapy can be selected based on clinical staging, tumor location, doctor’s experience, and nursing support for head and neck cancer.

The NCCN guidelines cover 97% of common tumors in the United States, and will be continuously updated based on the latest data and clinical information, which is absolutely authoritative!

According to the research data of the American Society of Clinical Oncology (ASCO), proton therapy can reduce the radiation dose received by the surrounding tissues of the target site by 60% and fully apply these doses to the lesion site.

In standard radiotherapy, the X-ray beam deposits energy along its path before hitting the target lesion, that is, when passing through the human body; after hitting the target lesion, there will still be a large amount of radiation dose remaining, and it will continue to be released along the beam path, causing damage For healthy tissues, this is called the “withdrawal dose.”

The proton is relatively heavy and will stop when it hits the target and will not produce an “exit dose.” 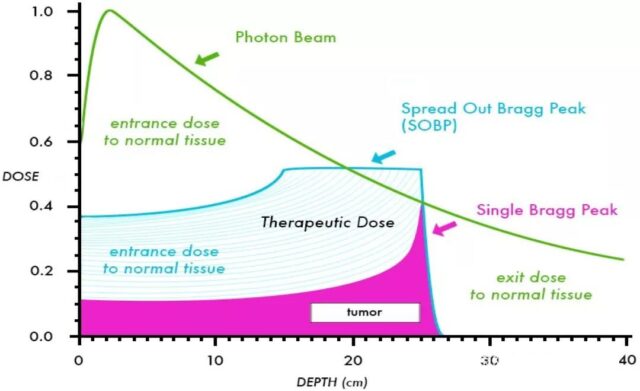 We can clearly see that when X-rays (photon beams) enter the human body and within a short distance after entering the human body, they will reach a very high radiation dose, and then gradually decrease. Until the irradiation to the lesion site, the dose intensity is only about 50% of the highest peak. And after passing through the lesion, it will still maintain a certain dose and slowly decay.

After the proton beam enters the human body, the dose remains basically stable until it rises and reaches a peak when irradiated to the lesion site, releasing the maximum energy; and after passing through the lesion site, it rapidly decreases and decays to 0 within a short distance. The normal tissue behind the lesion causes little radiation.

In general, while maintaining the same radiation dose at the lesion site, the proton therapy regimen causes lower radiation dose to normal tissues other than the lesion than the photon regimen. And the biggest feature of the proton therapy program is that the dose of the proton beam is rapidly reduced to zero after hitting the lesion area; the photon beam will always pass through the human body, and the dose will slowly attenuate until it penetrates the human body.

Proton therapy for head and neck cancer has less side effects

During the treatment of head and neck cancer, proton therapy can effectively reduce radiation exposure to important tissues around the tumor, such as eyes, mouth, salivary glands and brain tissue.

In addition, compared with traditional radiotherapy, patients after proton therapy are less likely to have side effects such as oral ulcers, nausea, salivary gland damage, and weight loss, and the use of feeding tubes is also reduced.

In the process of esophageal cancer treatment, it is difficult to protect important organs around the esophagus during radiotherapy, such as the heart, lungs and spine. Proton therapy can effectively protect these organs.

Proton therapy is more precise than traditional X-ray radiotherapy, which means that more energy can be used to destroy tumors and less radiation is delivered to surrounding healthy tissues. Therefore, proton therapy is particularly suitable for the treatment of tumors adjacent to healthy organs, especially head and neck cancer.

When treating head and neck cancer, it is important to protect the fragile organs surrounding the tumor. Proton therapy has great potential to reduce damage to the eyes, optic nerve, salivary glands and other organs near head and neck tumors, thereby reducing the occurrence of side effects such as blindness, worsening hearing and dry mouth. However, secondary malignancies are also unlikely to be suitable for proton therapy. 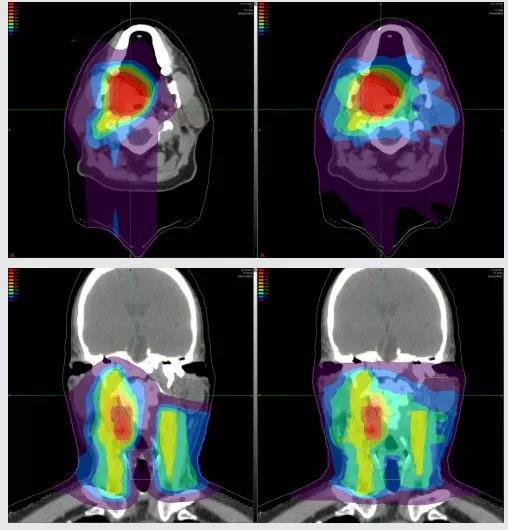