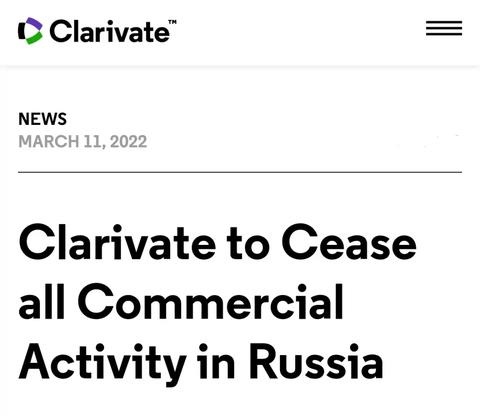 Clarivate Analytics is one of the world’s largest providers of scientific and intellectual property information services. It is the founder of the “SCI database” that everyone is very familiar with.

The toughest among them is a large group of research funders, including the German Research Foundation.

In a statement on February 25, it said directly that the country’s research funding will no longer benefit Russia.

The high-profile International Mathematical Union meeting was originally scheduled to be held in St. Petersburg on the 7th of the same month.

Under the enormous pressure of the mathematical societies of various countries, it was changed to be held online.

After Russia invaded Ukraine, many research organizations quickly cut funding and partnerships with Russia. But the moves have sparked debate over whether Russian scientists should be able to publish in international journals.

Some argue the boycott is morally correct and could help end the war, but many journals say the indiscriminate isolation of Russian scientists does more harm than good.

This week, Russian authorities appeared to be responding to boycotts and threats with “plans to cancel government-funded scientists publishing in recognized foreign journals.

Some Russian researchers say the move could further damage the country’s science.

Ukrainian scientists made the strongest call to ban Russian researchers from publishing papers/scientific results in international journals. “Russian scientists have not re-delivered any message of moral rights to the world scientific community,” Olesia Vashchuk, chair of the Council of Young Scientists at Ukraine’s Ministry of Education and Science, said in two letters dated March 1.

In a March 4 editorial, Nature said the publication boycott of the Russian researchers “would divide the global research community and limit the exchange of scholarly knowledge.”

At least one headline in Elsevier’s Journal of Molecular Structure says it will no longer consider manuscripts written by scientists at Russian institutions.

Rui Fausto, editor of the journal and a chemist at Portugal’s University of Coimbra, said the invasion violated international law. “Their decision will take effect immediately until international legality is restored.

In contrast, in response to the Russian intrusion, Clarivate, which operates the Science Network citation database, announced on March 11 that it would cease all business activities in Russia and close its offices there immediately.

It had previously suspended the assessment of any new journals in Russia and Belarus (supporting the Russian war), which also sent troops to Ukraine — which are seeking inclusion in Web of Science. Lisa Hulme, head of global external communications at Clarivate, said they are working with Ukraine’s science minister.

Myroslava Hladchenko, who studies higher education policy at the Ukrainian State University of Life and Environmental Sciences in Kyiv, said: “By rejecting manuscripts written by Russian authors, and excluding Russian journals from Scopus and Web of Science, Elsevier and Clarivate can provide an end to this war. Contribute. Russia bombed more than 60 educational institutions in Ukraine, underscoring their “attitude to science and education.”

Many researchers in Russia have spoken out against boycotting the publishing industry. A blanket refusal to censor and publish manuscripts “has no impact on Kremlin policy.”

Hladchenko believes that Russian scientists should do more to prevent war.

For its part, Russia appears to have responded to the growing isolation of the international community. On March 7, the office of Deputy Prime Minister Dmitry Chernyshenko announced plans to remove existing requirements for scientists to publish articles in journals indexed by Web of Science or Scopus, according to Russian news reports.

If Russian scientists publish in foreign journals, researchers receiving funding from the Russian Science Foundation and other government programs must publish their results in indexed journals.

Some researchers say the move could harm Russian science. Andrey Kulbachinskiy, a molecular geneticist at the Moscow Institute of Molecular Genetics, said the requirement to publish in international journals helps motivate the best research groups in Russia and improves the quality of research.

Kulbachinskiy worries that Russian scientists could soon be banned from publishing in international journals. Kulbachinskiy, speaking in a personal capacity, said that while removing the requirements could ease the pressure on publishing for many groups, it could lead to a “rapid decline in the quality of publications.” This “would make doing science pointless”.

Yuri Kovalev, an astrophysicist at the Lebedev Institute of Physics in Moscow, worries that following the imposition of financial sanctions, Russians may soon find it difficult to easily use payment tools to buy goods and services in their daily lives.

This makes it impossible for some institutions to pay article processing fees or journal subscription fees.