According to the statistics of the World Health Organization (WHO) , the global sleep disorder rate is 27%.

On November 9, 2021, researchers from Huma Medical in the UK published the paper entitled: Accelerometer-derived sleep onset timing and cardiovascular disease incidence: a UK Biobank cohort study in the European Heart Journal-Digital Health , a journal of the European Society of Cardiology (ESC) .

This large-scale study shows that sleeping between 10 and 11 p.m. is associated with a lower risk of heart disease . 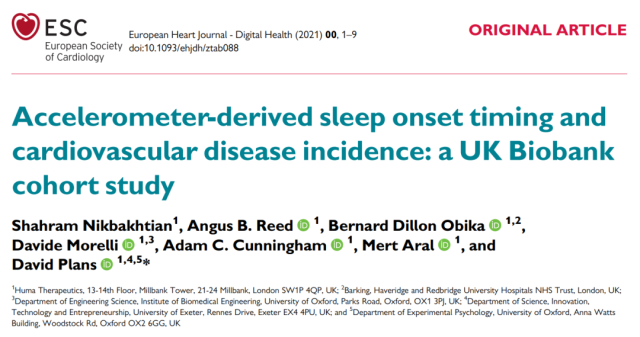 The research team collected the time they fell asleep and woke up over a 7-day period by having the participants wear a wrist-worn accelerometer, and surveyed the participants on lifestyle, health, and physical assessments.

During an average follow-up of 5.7 years, 3172 participants (3.6%) developed cardiovascular disease. 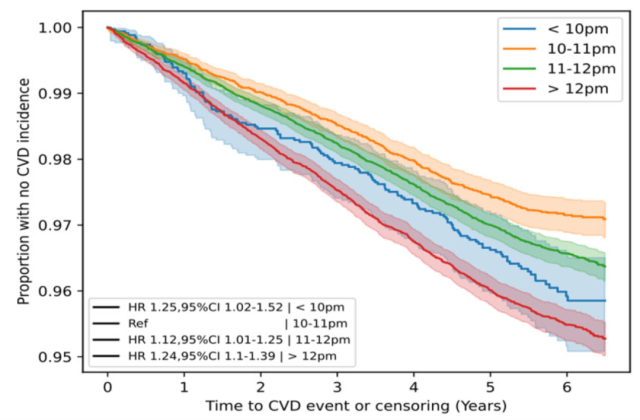 The study’s leader, David Plans , said: “This study shows that the best time for people to fall asleep is relatively fixed.

Deviations can be harmful to health. The most harmful is falling asleep after 12 midnight, which may be because of sleep.

The study also observed a stronger association between the timing of sleep onset and cardiovascular disease in women, although the reasons for this were unclear.

It may be because of gender differences in the response of the endocrine system to circadian rhythm disturbances.

In the end, the team said that although these findings did not show a causal relationship, the timing of sleep onset was still seen as a potential independent cardiovascular risk factor.

In November 2019, Cardiovascular Research , a journal of the European Society of Cardiology (ESC), published a research paper entitled: The contribution of sleep to social inequalities in cardiovascular disorders: a multi-cohort study . The study links poverty , sleep deprivation and cardiovascular disease .

The large-scale study of more than 110,000 people showed that lack of sleep is an important reason why poor people are more likely to suffer from heart disease .

If these findings are further confirmed in other studies, sleep duration and sleep onset timing could serve as a low-cost public health target for reducing cardiovascular disease.